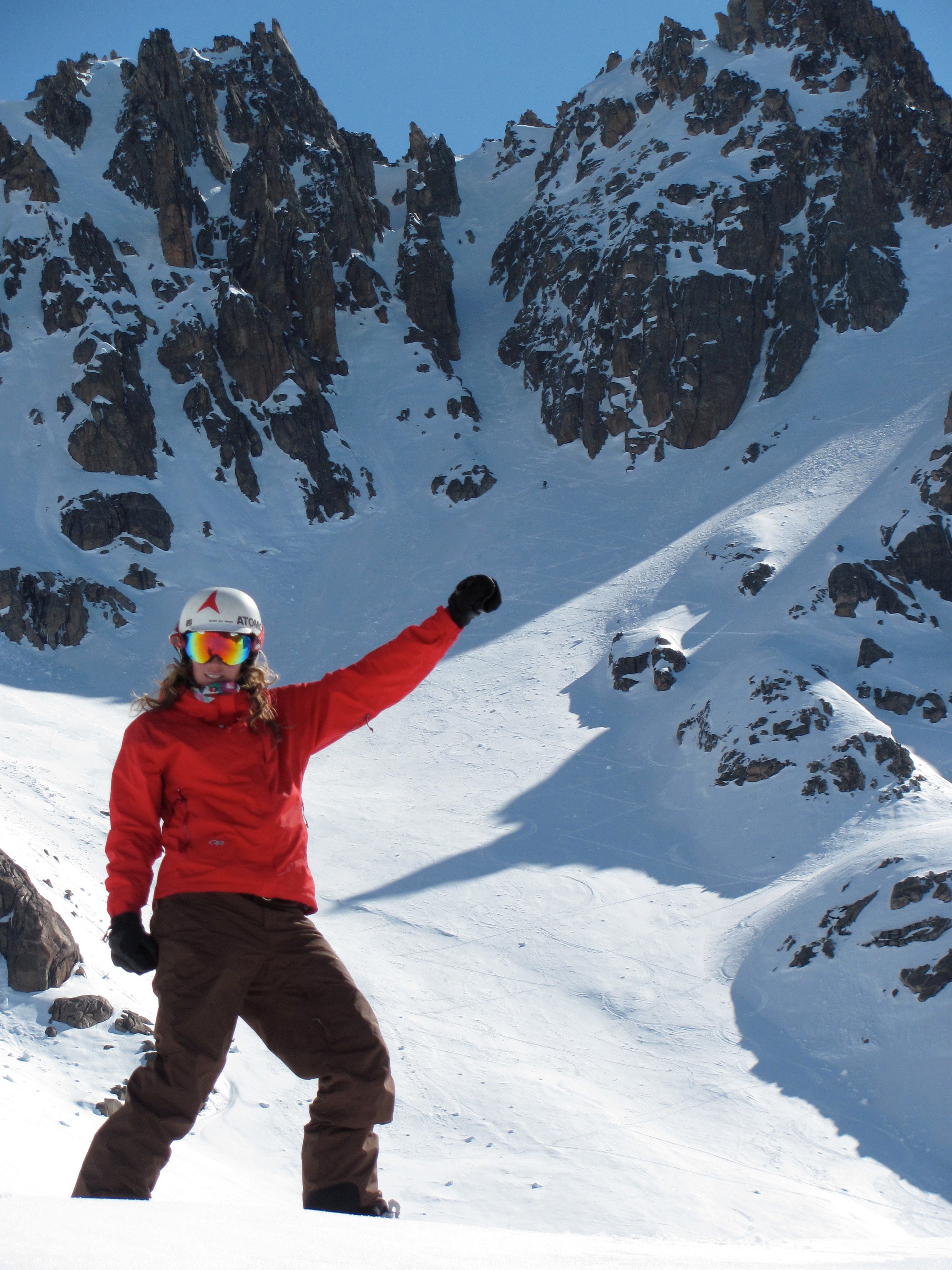 Perspectives on a season in South America from two skiers and their refugio's resident feline...

From the windows of the refugio the glare of ice blinds the skiers as they cross the frozen lake. For days, the wind has relentlessly howled, creating tornadoes of snow moving across the flatness of valley. But today, the sun shines and the chutes of ice convey the cold temperatures and wind from previous days. It is supposed to be springtime, but sometimes the frostiness of the Andes prevails. Two skiers continue their way towards the bottom of the cirque, venturing towards the looker’s right and the bottom of Tres Marias—an epic ski, just a short hike from the walls of Frey Refugio in the Cerro Catedral backcountry, my home for as long as I can remember.

Arriving at the refugio was like walking into a painting: a quaint, picturesque stone structure stands perfectly positioned on a glacial moraine surrounded by a tempting cirque of Couloirs and open chutes. We reached our destination just short of nightfall after skiing out of Cerro Catedral’s boundaries, down to a lake, through a valley, and then back up to a ridge, where the refugio sits atop the moraine. Upon entering our temporary home we are greeted by, first a cat, then the caretaker of the refugio, Alan, an avid climber and guitar player. Behind Alan sits an Austrian and his Argentinean guide, plus a Canadian girl and her American boyfriend. He’s from Alaska. We hurried upstairs to claim our spots among the dozens of colorful bunk beds available and then down to the fire to hang gloves, goggles, skins, etc. Alan prepared a pizza. We bought a bottle of wine, and started planning our next week. Strategy: Ski Couloirs, eat, sleep, repeat.

The two skiers are in the middle of a larger face. Stopped. Probably taking skins off and transferring their gear to start boot packing the steeper slopes at the top of the cirque. I have watched the process a considerable amount of times—an easy task when you have the time provided for the duration of nine lives. Once they begin moving, with their skis on backpacks and boots in crampons, the remainder of the climb goes quickly. And as I expect, they move towards the top of Tres Marias; an open field for nearly 1,000 vertical feet, followed by vertical walls and a rock choke with a questionable mandatory air. It is the first line that most of the visitors point out; the most obvious challenge in sight. Today with a constant shadow over the choke and enough ice to make even a figure skater hesitant, I would have opted for a lunch and chocolate bar within the comforts of the refugio. But these two skiers have stayed for the past week and skied every line, except this one. After today, they will have checked them all off.

We never expected the conditions to get better. But every night we prayed it might snow. It was the end of August and the season was quickly ending in Argentina. Normally we wouldn’t even be skiing, but instead mountain biking, watching ski movies, working for the upcoming season, etc…But, as all skiers know, morning spring ice eventually transforms and in August it would be silly to not utilize the blanket of white. The afternoons brought tolerable, high-speed, soft corn and the day we chose to ski Tres Marias was no exception. Looking back towards the refugio from the top of our line, its stone walls blended in with the rocky spires in the background. We could only faintly see the crimson shutters, which protect the windows of the hut during intense winter storms. I watched as Zack disappeared into the choke of the chute, listening as his skis scraped abruptly on the solid surface beneath our feet. After a minute I dropped into the shadow of Tres Marias, not sure what to expect.

For all of the time it took the skiers to reach the top, they are down Tres Marias and back out on the lake in an inconsequential amount of time. And their day is probably not finished. As for mine, I might get lucky if the caretaker decides to open the door, allowing me to sneak by for an afternoon of exploring. They will be back tonight to our small sanctuary, which sometimes accommodates up to 20 or 30 visitors in the winter. Tonight there will be only eight, inluding Alan and Santiago, the caretakers. Sharing stories of adventures, routes, and snow conditions, in a medley of languages, the travelers seldom notice my presence.

That night when we arrived back at the refugio did observe the female cat during our stay. She was in heat. Climbing around on everyone’s laps and on the top of the table, even with the pizza/wine/chocolate/candle spread, the feline was in need of attention. But with too many new friends from all over the world to engage in conversation about our home ski areas, the day’s activities, and other things as more wine was consumed, no time was set aside to amuse the cat. Thank you to Alan for keeping her fed. We will be back next year to ski Tres Marias without the ice.