What My Parents Think I Climb 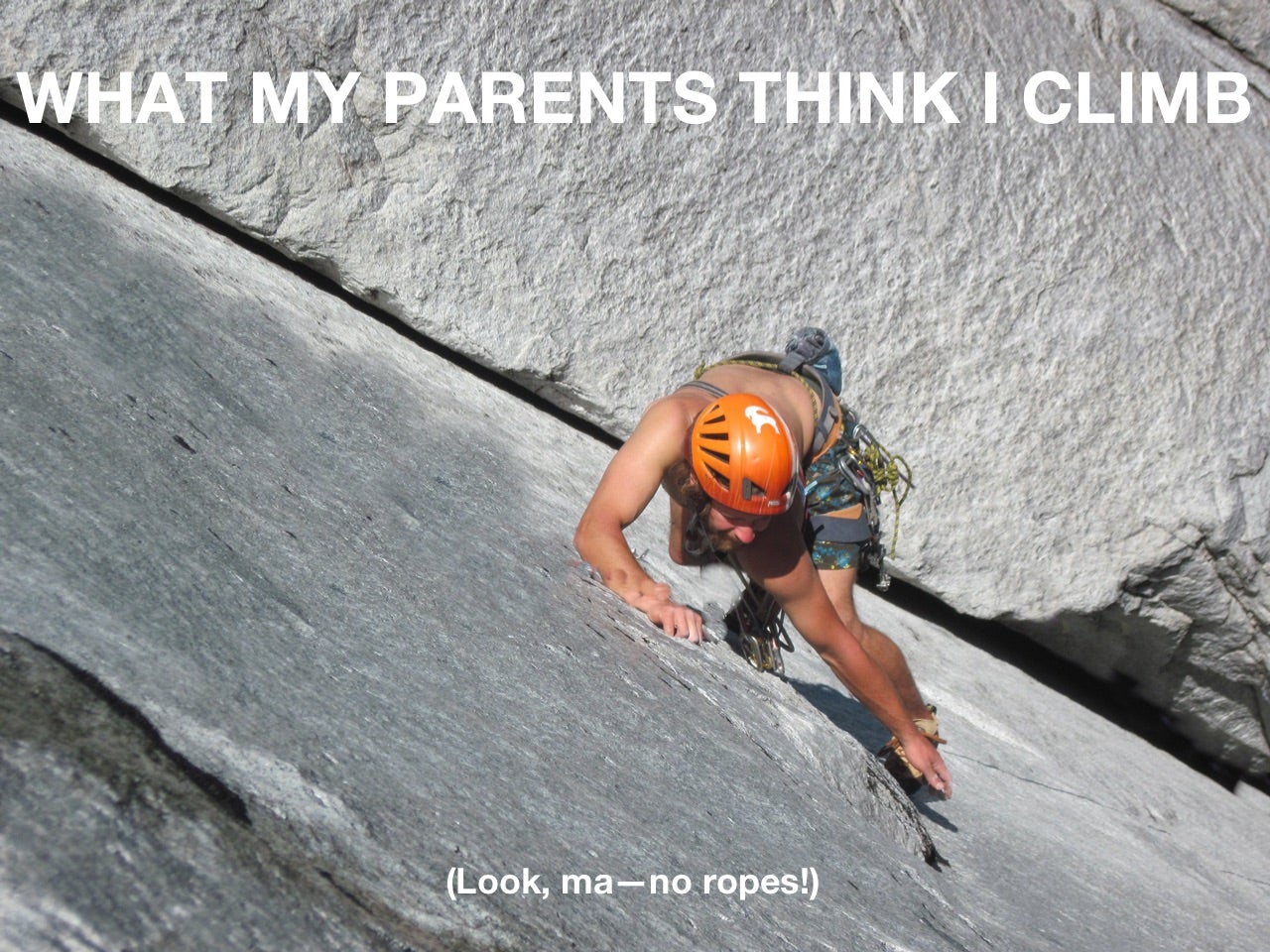 Beep. ... “Hey you. It’s Mom. So I heard about these two guys who climbed up El Cap Nose today and set a record by four minutes… So, you know, are you writing something about that? Or, is speed climbing a new sport? Uh, I guess what I’m wondering is, how do they know when to start the clock?” ... Beep.

First of all, can I just say: I love my mom.

Second of all, let me say that this was not the conversation I expected to be having with her following Brad Gobright and Jim Reynold’s blazing speed record on El Cap last fall.

The conversation I expected to be having was about the fact that just a week earlier, my friend Quinn had taken a fall that cost her the use of her legs for the rest of her life—on that very same route. I figured my mom would say something more like, What in the world were these guys thinking going out there and doing the same darn thing?

RELATED: Climbing Made Me A Better ... Boyfriend

These are the kinds of questions my mom tends to ask: What are you doing out there? Are you being safe? How do you know you’re not going to end up dead like one of these other people?

I’m not a big deal climber, but sometimes my mom mistakes me for one. It doesn’t help that the only climbing news mainstream media ever picks up on is always either some tragedy, or some climb that pushes the “Risk Envelope” in a way I—and probably most of us— would never even dream to do.

But my mom’s question is even better, in a way, because it serves as a reminder of how little she and my dad know about climbing. Forget the logistics of short fixing and simulclimbing—they don’t even know when you start the clock! They’ve never even heard of the El Cap tree! They probably don’t even know who Tom Evans is… sheesh. 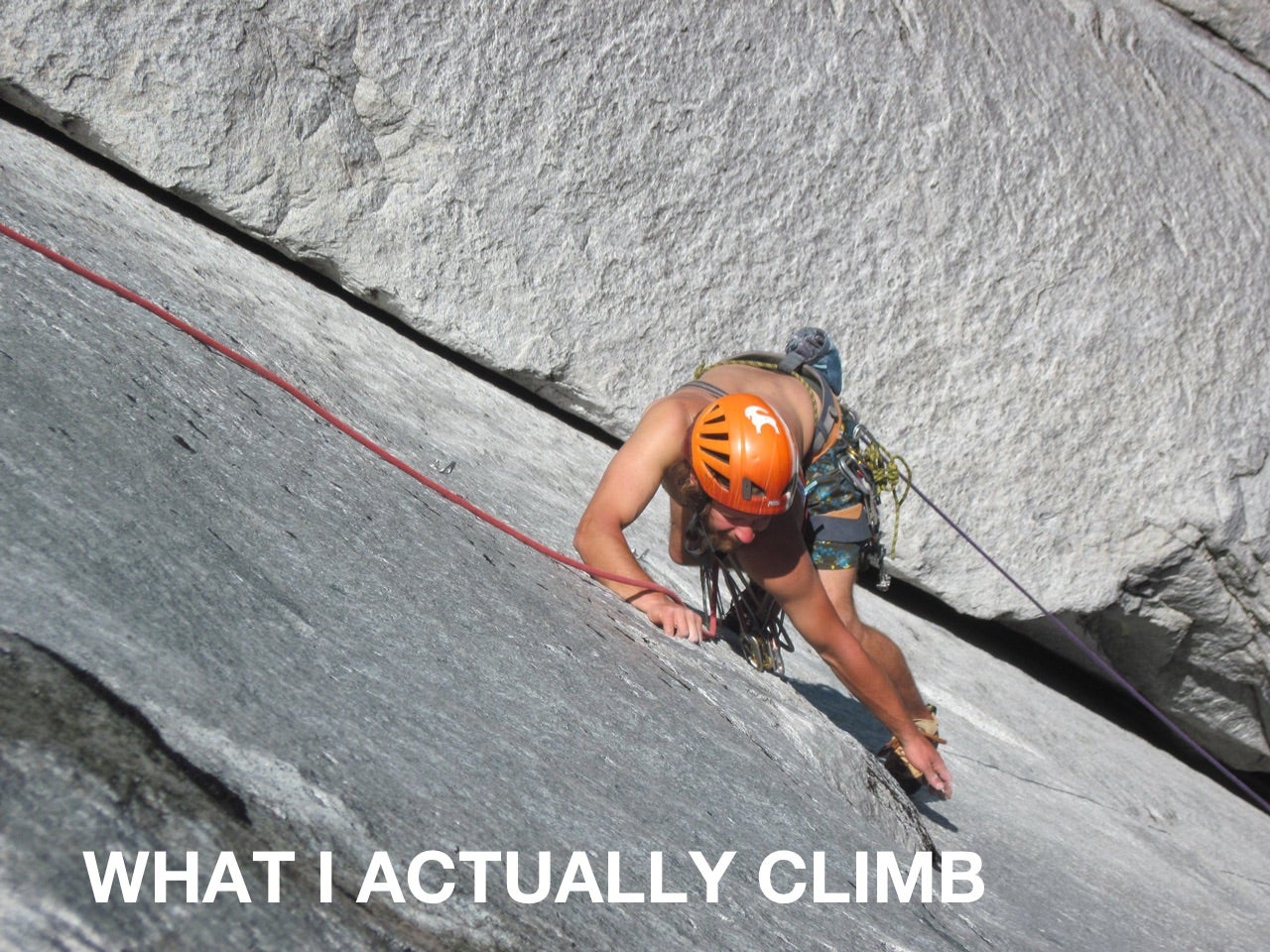 Even though I’m a pretty plebeian climber, I’m still proud of what I’ve achieved. But I feel like every time I describe some difficult situation I was in, they start picturing me up on the ol Capper, just freehanding cool as a cucumber like my good friend (obviously we must know each other, how many climbers can there possibly be?) Mr. Honnold.

But I want my parents to be proud of me—not worried. So how do I get there?

This may come as a surprise, but the best answer I’ve been able to come up with is a really simple one: Patience.

If you’re obsessed with climbing like I am, it can be easy to forget how myopic your vision of the world is. My mom and dad both work. They’ve got horses, a dog, a cat, a garden, a daughter with three children, a slew of siblings, nieces and nephews, bills to pay, home repairs to do, you know, real world stuff. On top of that, they read this thing they used to have back in the day called a “newspaper.” They vote, they go to protests, you know, they’ve got other things than climbing on their minds.

All they really want from me is to paint a picture for them: one in which there are ropes, and springy widgets you put into cracks which catch you if you fall, and partners, and plans to live to the ripe old age of forever.

So, even though I feel like it should be intuitively obvious that the question is not “when do you start the clock” but “how in the world is it possible to climb freaking El Cap in two hours 19 minutes and 44 seconds?!” I did my best to answer clearly and patiently.

And in the end, it’s kind of fun. This lady literally used to wipe my ass and clean up my drool. I used to ask her how to tie your shoes, and why your nose bleeds when you pick it. Who would have thought that one day I’d be the expert, and she’d be asking these “silly” questions of me?