The "What The %$*& Was That" Guide To Patagonian Wildlife 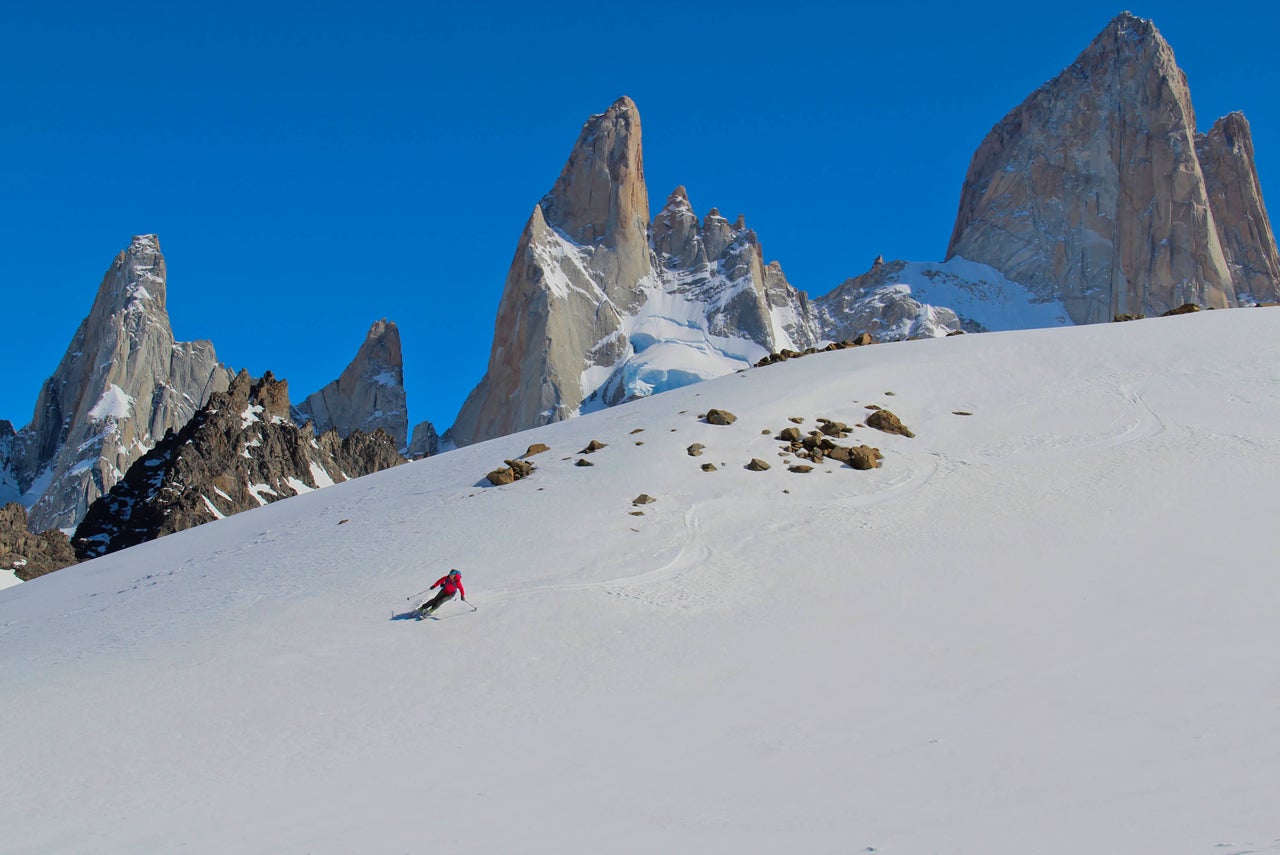 After 32 hours of traveling, our plane set down on the quiet runway at San Carlos de Bariloche, Argentina regional airport. We strapped our ski bags to the top of a very small taxicab with a single bungee chord and sat on top of our boot bags in the back of the cab as we rode into town to stay at our hostel for the night. Kim Havell, fellow professional skier and guide, is my adventure partner, and together we were tackling a two-week backcountry ski trip in the Argentine Andes, via a van and a true spirit of adventure. We put the trip together very last minute, and I arrived only prepared for our technical skiing. Otherwise, I was winging it. My Spanish felt rusty, my Argentine history fuzzy and I was playing catch up with my cultural and natural surroundings. And that included my knowledge of the local flora and fauna. So what I saw along the way was an awesome surprise. 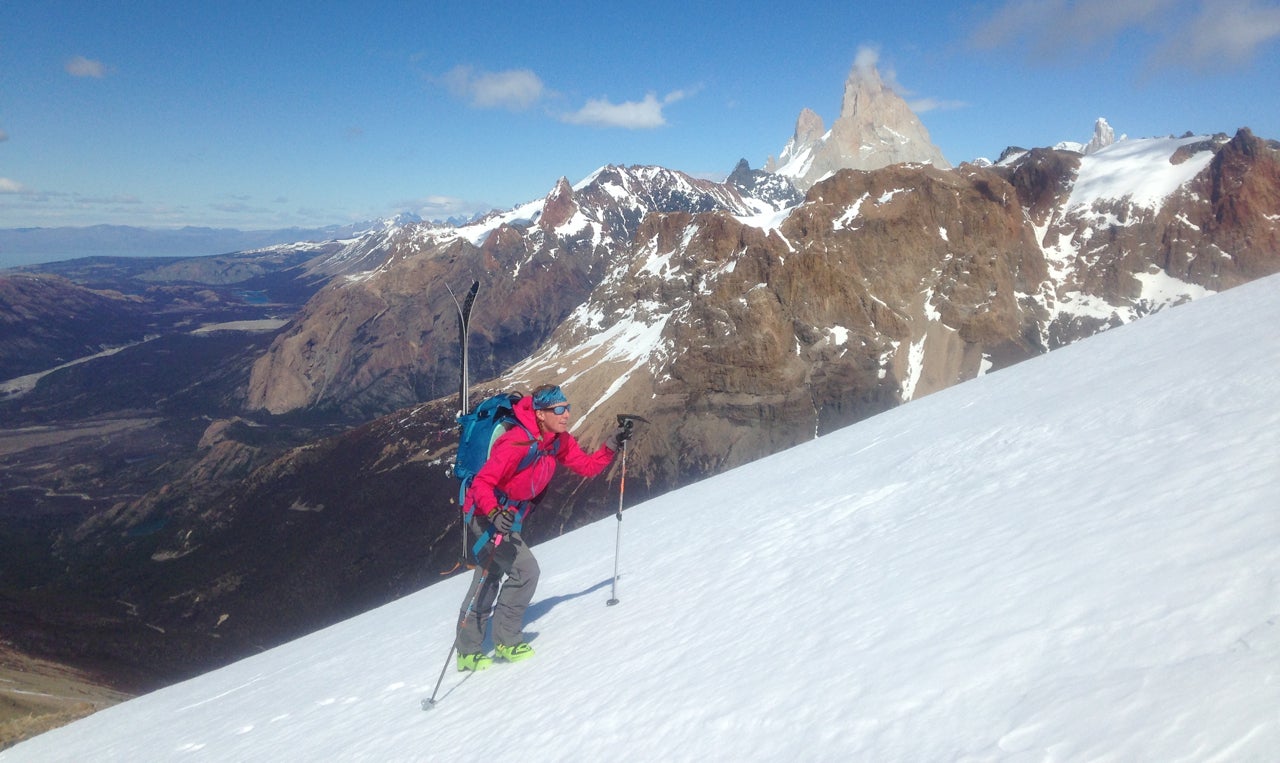 Our goal was to tackle as many backcountry ski descents as possible, starting in Bariloche and working our way south through Patagonia. We had two weeks and a van stocked with food, gear, and Argentine wine. It was my first time to the region, and I was excited to take in the new environment. And along the way, I saw a handful of unusual animals that I made note to Google when I got home. Here are some of the highlights, in both layperson's terms and scientific terms. 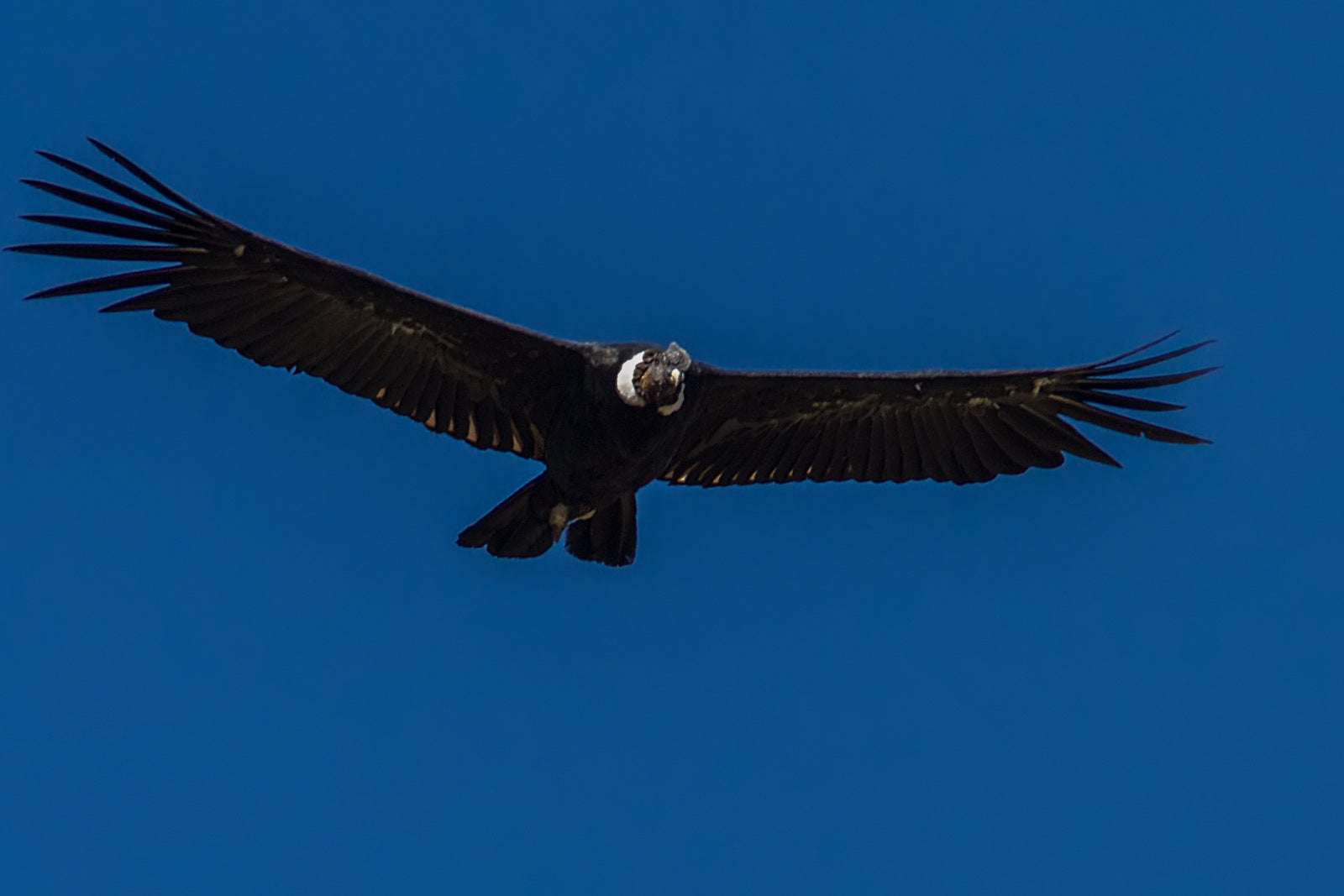 The Lakes District and extremely large birds
We were schlepping our gear on our backs up a minimum of 2,500 vertical feet before we hit the snow. It was lightly drizzling and I could see the snow line above as we trudged up the faint trail. An alarming sound resonated from the beech forest. “What was that?” I exclaimed. Suddenly a massive bird flew over our heads, nearly buzzing us in the small clearing, as we gaped in awe. “It’s a vulture, no its HUGE, it’s a condor, yeah a condor! Aren’t condors the biggest?” I looked at Kim—elated and slightly terrified of this large flying creature. We didn’t see the bird again that day, but we skied soft corn snow down playful rolling terrain with views of  Lago Naheuel Hauapi. After skiing, we vowed to look up the bird we just saw on the intrawebs.
The Findings: The Andean Condor (Vultur gryphus), with a wingspan of up to 10.5 feet, is considered one of the world’s longest-living birds (they can live to be up to 70 years old), and is the only genus of vulture in the region. It’s a national symbol of Argentina.

The Patagonian Steppe and the alpaca/llama looking things
We’d been driving for over 10 hours out of the mountainous regions and into the flat, dry plains of the Patagonian Steppe. The intermittent gusts of wind were enough to rattle our nerves in a tall, boxy van, but the strange woolen alpaca-esque animals that I kept seeing everywhere were helping distract me from the vicious wind. Kim and I debated what these animals were. It looked like a funny blend of horse, llama and goat in my opinion. A llama, no an alpaca? We didn’t have an internet connection, so we decided to stick with alpaca until we could find out more. One thing we did know was these animals were everywhere along the Steppe, and they made funny noises at us when we got out to take a pee break in the middle of the desolate plains.
The Findings: Guanaco (Lama guanicoe), the camelid species that’s native to the arid and mountainous regions of South America. The guanaco is the domesticated llama’s parent species, but is not the same. And the guanaco is not an alpaca, although they do share the camelid species classification. Guanaco wool is considered to make some of the finest cashmere in the world.

The Patagonian Steppe and the "ostriches"
The wind gusts were like invisible freight trains that barreled into us before we even knew it was coming. We drove slowly because of this. There was a bird running adjacent to us at nearly the same speed. It looked like an ostrich. I asked Kim what she thought, and she says, Yes an ostrich, or perhaps an emu? They run around in flocks and flap their wings, but do not fly. These animals don’t seem to be phased by the wind gusts.
The Findings: Rhea (Rhea albescens) is a large flightless bird that can weigh up to 80 pounds. The rhea is considered a threatened species in their native ranges. The guachos (Argentine cowboys) traditionally hunt rhea by horseback and eat the meat of the bird. Although it has some similarities to the ostrich and emu, the rhea is not in the same genus.

El Chalten, Fitz Roy, and wild mountain parrot hawk
We found the best skiing of the trip in the El Chalten region, the gem of the Argentine Andes. We were exploring a vast region of terrain, but especially fell in love with the Fitz Roy massif. Granite spires towered above us as we trekked to the base of Fitz Roy and the Glacier de Los Tres. The scenery was breathtaking during our seven-mile approach to the snow and ice. Just below snow line we stopped for some water and food before our final push. A very strange “cahcaw!” sound came from a tree near us, and a large bird the size of a big hawk with a hooked red-orange beak swooped down and started cackling at us. I’ve never seen any bird like this. It’s a parrot, it’s a hawk, it’s a high-altitude vulture, we thought—it’s loud and bold. Gonna have to look this one up as well…
The Findings: The southern caracara (Caracara plancus) is one of the largest species of falcons in the world. It thrives in open to semi-open habitat from Tierra del Fuego all the way up to the Amazon River. It’s commonly found throughout South America, and is a hearty species. 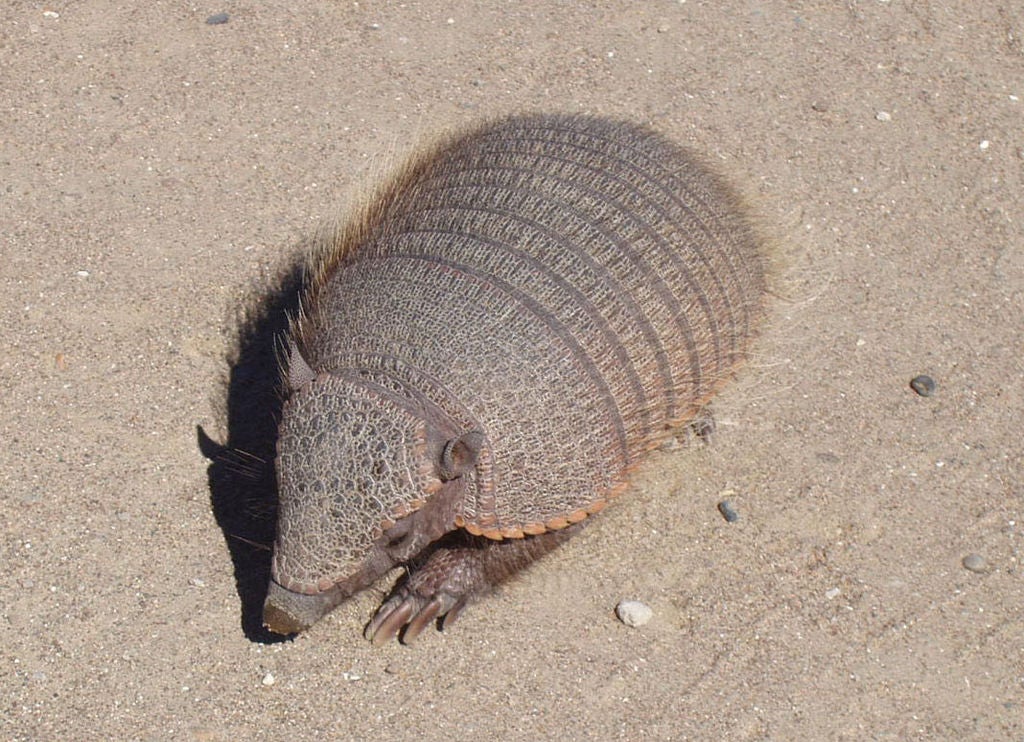 El Calafate and the cutest armadillo.
After seven days of skiing in the El Chalten region, we made our way further south toward El Calafate, ultimately to catch a plane home. We’d skied steep couloirs, broad mountain faces and glacial terrain. We summited peaks and ascended long, winding ridges with sweeping views of the Andes. Our trip was a success to say the least, so the final scenic drive was bitter sweet. We stopped alongside the road to take a photo of Lago Viedma and the vast southern ice cap just beyond, when something scurried from behind a rock. It could have been a rock itself, except it was moving! I caught this creature out of the corner of my eye. It was a small armadillo—this time I recognized the animal, yet this one was cuter than those I’d seen before. Kim and I talked to the little creature as if it could understand what we are saying. It just stared at us with little bead eyes and cocked its head to the left before scurrying away underneath another large rock.
The Findings: The Pichi, or dwarf armadillo (Zaedyus pichiy), is a small armadillo native to Argentina and Chile. It’s the only armadillo known to hibernate, and they commonly eat beetles, ants, scorpions and the occasional lizard in order to plump up before their hibernation period from May to August, Patagonia’s primary winter months.