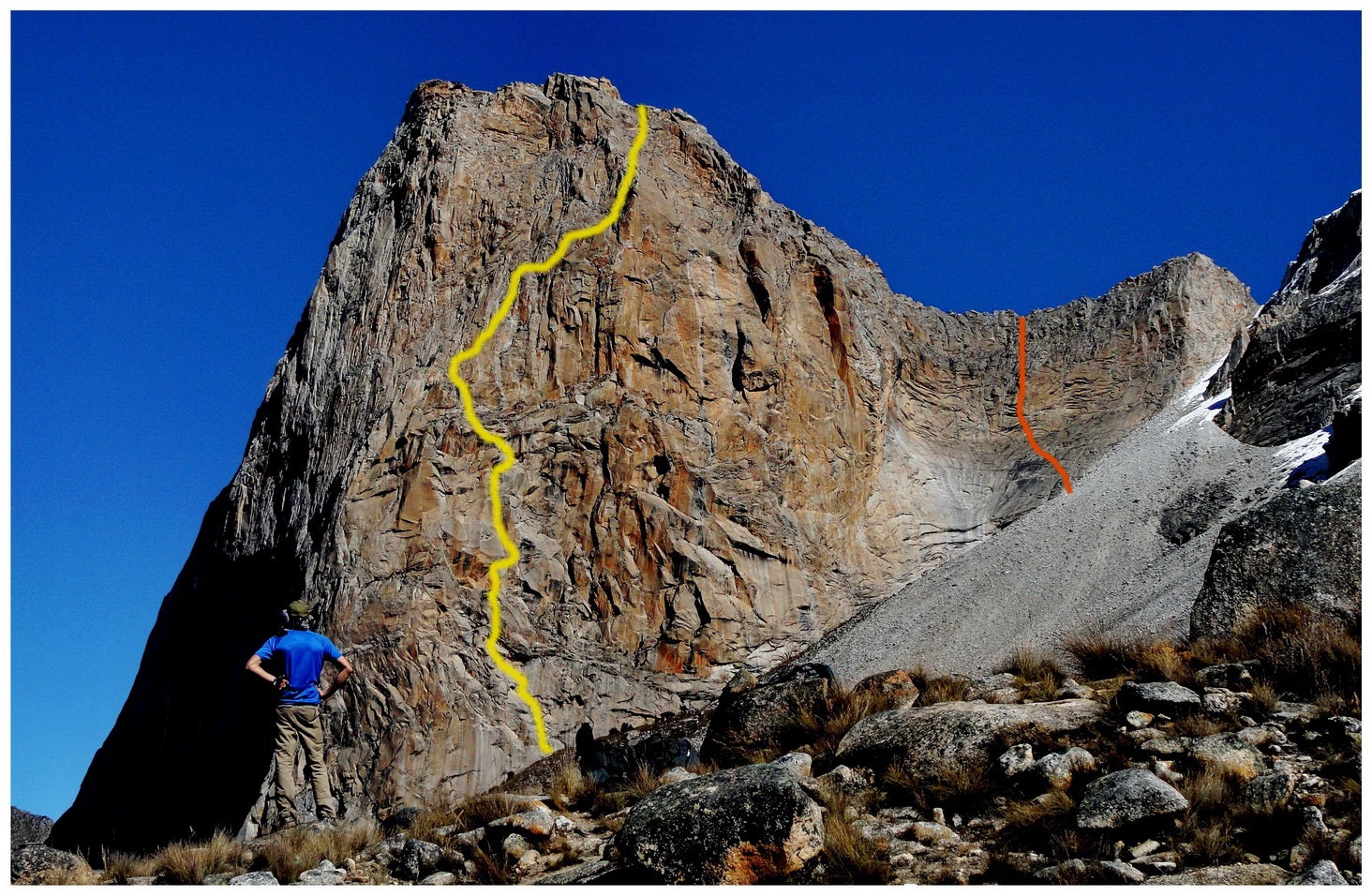 Lindsey and Ben Kunz are two avid adventures and corporate jockeys, constantly in search of a balance between the two. Living in Seattle, WA, the pair have taken more than one “mid-life, mini-retirement” of sorts to explore the world’s cultures, rocks, and alpine peaks. They continue to annotate their adventures abroad online at: www.travelpod.com/members/benandlindsey. Breaking free has its rewards. Since quitting their corporate jobs in the U.S. to volunteer with the Andean Alliance at the foot of the Peruvian Cordillera Blanca, Lindsey and her husband Ben  have found fulfillment on both their “work” days and their “rest” days.

With a handful of snow peak ascents under our belts, we set our sights on a classic grade IV/V rock route on La Esfinge (The Sphinx): the Italian Route (also called the “Original Route,” traditionally rated at 5.11c, though many parties today, including us, rate it around 5.10d R).  At roughly 20 pitches  of technical climbing, this route is usually completed between one and three days; however, the first ascensionists completed the Original Route in July of 1985 in nine bivouacs. Southeast-facing, a bivy on the Sphinx’s windy face seemed intolerable to us, so we formulated a multitude of strategies to ensure a one-day ascent, even as a party of three.

Ben, our Swedish friend Per Andersson, and I spent a couple days in sport climbing area, Hatun Machay, practicing endurance, strength and speed.

From climber’s base camp at the Sphinx, we decided to hike the hour-long talus approach and climb the first five pitches, familiarizing ourselves with the moves and route-finding. Atop the fifth pitch, we stashed food and water for a lighter start the following day.

We set off at 4 a.m., with the weather feeling warmer than expected. We led in blocks, with Ben taking the first and most technical ten pitches and Per taking the second ten for optimal speed. We managed the first five pitches before the first rays of light. Grabbing our stash atop an off-width 5.10 pitch and the famous “blob mantel” pitch, we made no pause. Ben led through the two 5.11 crux pitches, under-clinging and jamming his way with speed and relative ease. He hauled our packs to keep us all moving at top speed.

We reached the bivy ledge atop pitch ten by 11:30 a.m., 30 minutes before our turnaround time. Excited and anxious, we decided to press forward, switching the leads to Per.

By about 1:30 p.m., the sun moved around the south face, leaving us in a windy shadow. The “screaming barfies” kicked in with every pitch, as our bodies worked to rewarm themselves from the belay. I’ve never climbed 5.8 or 5.9 in such conditions, wearing two down jackets separated by a wind jacket, all while carrying a decently-heavy pack. But this necessity quickly grew familiar, and the mental insecurity of not being able to feel the rock beneath our fingers and toes soon vanished. We clambered up as quickly as possible, racing impending nightfall.

As we pulled on to the 17,470-foot summit at 5:30 p.m., we were rewarded by the final embers of daylight and a stunning sunset panorama of the Parón valley.

No time for delay or celebration, we scuttled down the soft snow and blocky scree to the cairned rappel station. We simul-rappelled the second of the three raps for speed as the light dwindled, and by the end of our third and final rappel, we donned headlamps and cautiously navigated the several hundred feet of rock slabs until we reached the scree near the base.

All the focus on making it this far before dark left me no time for eating, and I was was bonking. I carefully tried to stuff bits of crumbled Peruvian cookies in my mouth, dry-heaving between gummy bites. And yet, just a few calories was enough to make it back to camp safely by headlamp. We slept in the next morning and enjoyed a pancake breakfast the following day before packing up camp. The Sphinx was one of the most aesthetic climbs I have ever done, and a challenge I will forever hold with pride.