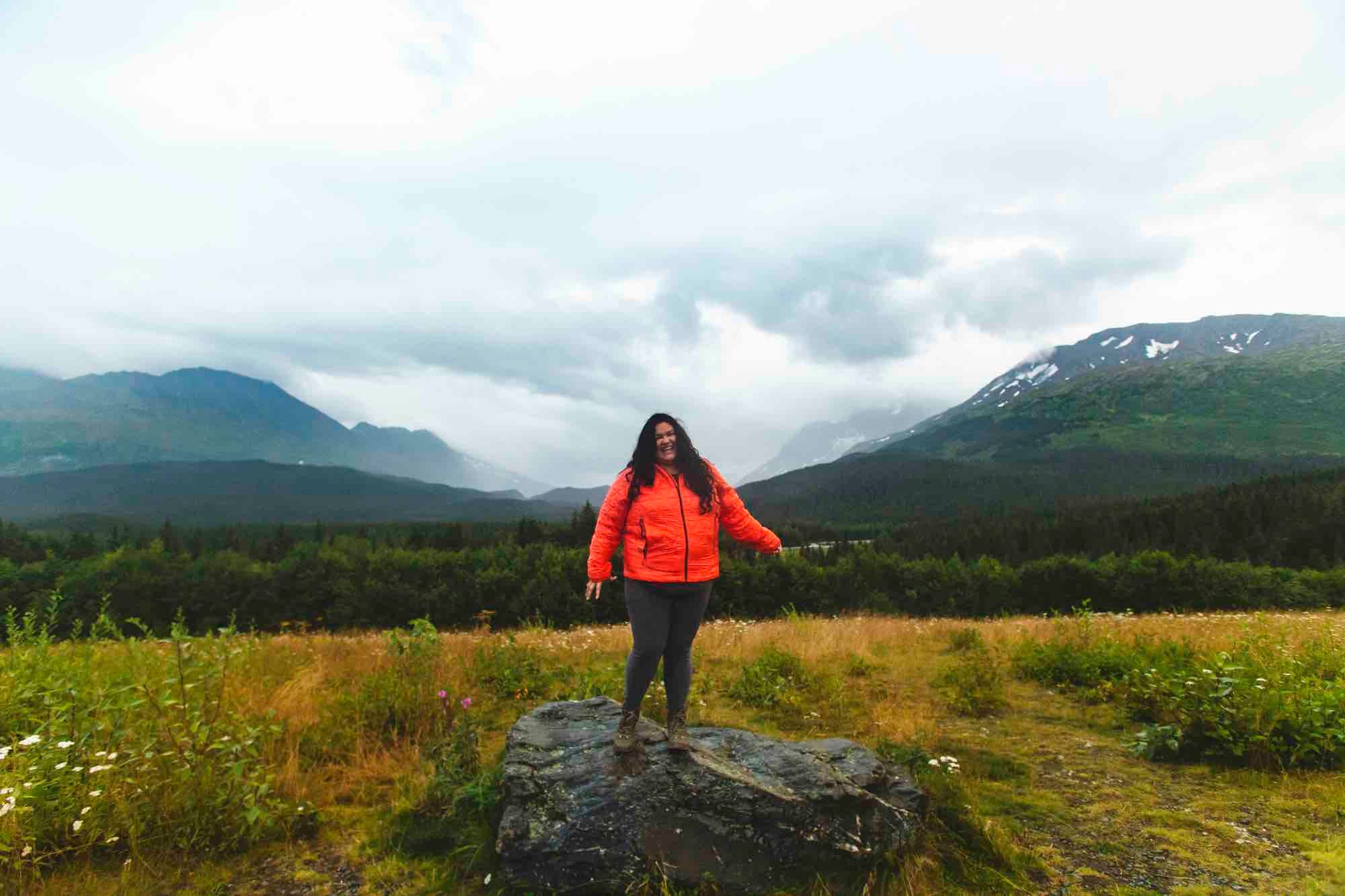 Sam Ortiz breaks down the self-talk that can hold us back.

When Sam Ortiz talks about how much she loves hiking or climbing, her enthusiasm bubbles over like a waterfall, threatening to make anyone else around excited about outdoor adventures, too. It hasn’t always been like that, though—there was a time when Sam consistently turned down invitations to hike. “I always turned them down because I thought I couldn't do it, so I just decided I wasn't even going to try,” she says. She was living in Alaska at the time, and it came down to her final week there before she decided to join her friends on a hike up Mount Juneau.

“I was very nervous and I had to talk myself up,” she says. “I was like, ‘I'm going to try to do this, and I'm going to go slow, and I'm going to take breaks, and I probably won't make it to the top of this mountain—but I'm going to try.’ And I did exactly that. I went really slow and I took a lot of breaks, but I made it to the top—and I was completely awestruck and overwhelmed. Because not only was there this gorgeous mountain view, but I also suddenly realized that I'd been telling myself for a year that I could not do this thing, and then I did it.”

Since then, Sam has been on a mission to unlearn what she thought she knew about what she was capable of. That mission has taken her climbing, backpacking, paddling and mountaineering—and has led her to start meetup groups to help others unlearn those messages, too.

“I really had to do some reflecting about whether or not I was willing to be the one to keep stopping myself from doing these amazing things I wanted to do."

“There were no people in my life saying, ‘Sam, you can't hike this mountain with us.’ It was me,” she says. “I really had to do some reflecting about whether or not I was willing to be the one to keep stopping myself from doing these amazing things I wanted to do. Because I wanted to hike to the top of that mountain. I wanted to get up there and see the views and feel strong and feel empowered. I had to start making sure I wasn’t going to keep being the one stopping myself.”

As Sam has taken more people into the outdoors with her, she says she hears messages and self-talk similar to what she’s been consistently unlearning. We asked Sam to share some of those messages—and encouragement for moving past them.

“This is a really, really big one, especially for anyone in a plus-size body, or people who are beginners. They don't think they're athletic enough to even start, to even try. Or they think that they have to do X, Y, Z, these other things first before they could start doing something like going hiking.

“Something I think is important to tell people is, ‘If that is the way that you feel comfortable doing it, absolutely go ahead. But if you think you have to, and you would rather be hiking out on a trail because it's more interesting or more enjoyable—then you don't have to. You don't have to be able to go on a one- or a three-mile or five-mile walk in your neighborhood before you ever get outside. You can do a one-mile, pretty flat walk on a trail, and then you can do a two-mile pretty flat walk on a trail, and you can do a two-mile with a little bit of elevation gain on a trail, and so on from there."

“I experienced this as well, having a lot of anxiety before going out on a trip because I was worried I was going to slow everybody down. … Beginners who are thinking about getting into the outdoors and really want to go exploring and see all these beautiful places, they’re scared of going alone because of all the unknowns, but then they're also scared of going with other people because they're afraid that they're going to be breathing too heavily, going too slowly, needing to stop too many times. None of the choices seem comfortable.

“One of the things I would do before going on hikes is, instead of being really out of breath and trying to keep up, I would set expectations with my outdoor partners. Like, ‘This is the general speed that I walk comfortably at. And what I'm looking for in this hike is for us to walk together and for us to take breaks, both for breathing and for pictures and for talking, and for us to not race to the top.’ Those are my values whenever I'm outdoors. And if that's not someone else's values, if they are the kind of person who wants to race to the top and get there as fast as they can, that’s valid, but we are just not going to be hiking partners anymore. You can be friends in a lot of other areas, but maybe we just stop going on trips together, because neither of us are having a good time.

“My partner, he hikes faster than me and he's comfortable hiking at my speed. He just needed for me to tell him that's what I wanted. I just needed to tell him, ‘You can hike in front, but I need for you to stop every once in a while, and wait for me and hike with me too.’ Setting up those expectations and asking for your needs is huge.”

“People have felt things like ‘I'm too brown to be out there,’ or ‘I'm too young or too old.’ People have shared both with me. And then also just the general, ‘Climbing isn't for someone like me,’ or ‘Hiking isn't for someone like me,’ like people who have my body type or people who have my skill level or whatever the case may be. They haven't seen anyone who represents them doing this thing. They feel like it's just not something they can do or want to do, or maybe even consider doing, just because there wasn't anyone ahead of them who showed them the way.

“Something I have tried to practice and share with people is practicing permission—giving yourself permission to take up space. ‘Maybe, I do not fit in here. I do not fit in at a climbing gym. I am by far very different from almost every other person around me.’ For example, I've been climbing for years and I still climb the easy grades because that's what I enjoy. One of the things there was giving myself permission to do that and just have fun with it. To climb the grades I feel are comfortable and fun and make me happy, and enjoy them instead of trying to push myself to do hard grades that were scarier for me or that weren't as fun.

“So permission to take up space, even if you don't fit the mold, and even if you're the only one there, but also permission to express your needs and your expectations. This one is a lot harder to do. Something I started doing after quite a few years of hiking and being outdoors, and feeling a lot of anxiety about being slow or not being good enough or not climbing the grades that my climbing partners were climbing, I started just trying to give myself permission to exist as I was, to be a beginner—or not be a beginner but just not be that good, technically speaking.”

Sam says she wishes people would do is give themselves permission to be OK with the idea of “failing.”  “Failing at least lets you push yourself and figure out where your limit is, so you can either choose something that's a little bit easier next time, or maybe work toward that limit and maybe get it next time or the time after that.”