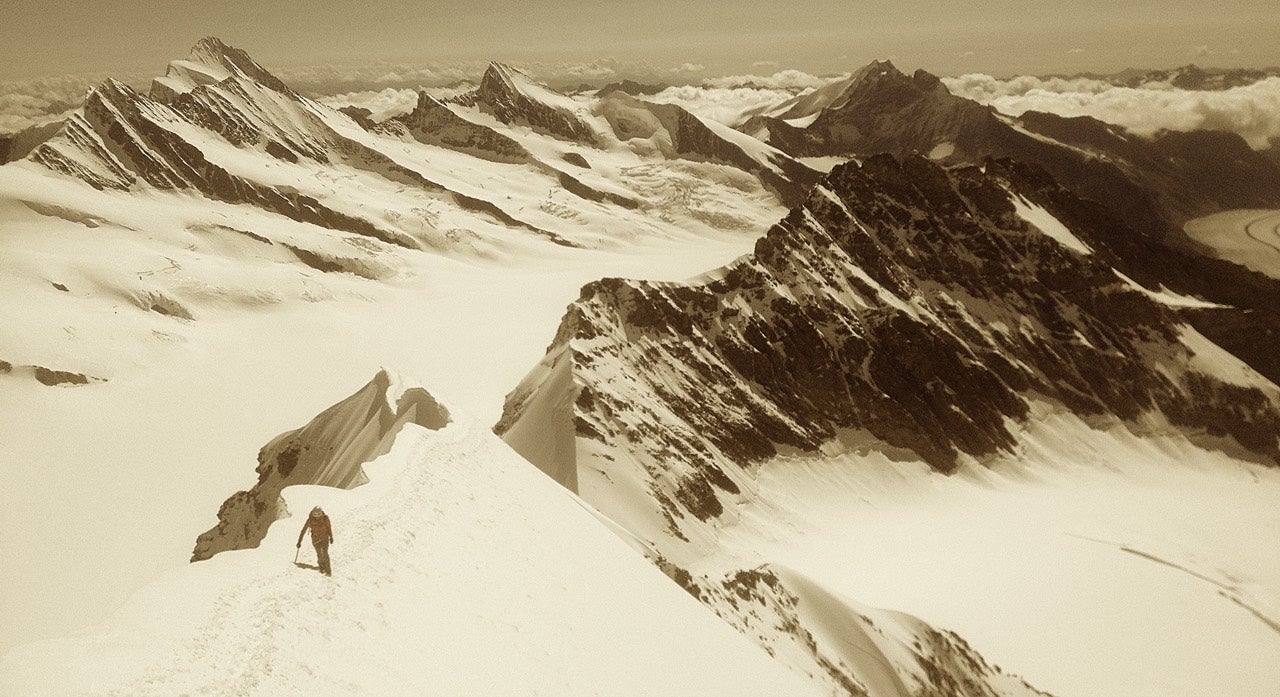 Long before we had hashtags and women’s climbing festivals, there were generations of female pioneers paving our way toward the top. These five women each redefined the rules in their own way: by going where no women had been before, by planning their own expeditions dictated by their own goals, by taking responsibility for their own relationships with the mountains. I like to think that in many ways they’re still part of each team we join today, silently celebrating each footstep they’ve helped us achieve.

Fay Fuller was a teacher and journalist living in the tiny town of Yelm, Wash., when Philemon Van Trump and General Hazard Stevens invited her to join a team intending to climb Mount Rainier in the summer of 1890. On August 9th, Fuller set out to climb the state’s tallest peak dressed in flannel underwear, a thick bloomer suit, woolen hose, boy’s calfskin shoes, and a straw hat.

When they left Camp Muir for the summit, Fuller smeared charcoal on her face to protect her skin from the sun. Refusing any assistance from her male climbing partners, she tucked her hair into her hat, dodged rockfall, and wove her way through the heavily crevassed glaciers of the upper mountain. At 4 p.m. on August 10th, 1890, she became the first women to stand on the summit of Mount Rainier. They spent the night in a steam vent in the summit crater, then slowly descended to Paradise the next morning, where they spent five days recovering from the climb. According to urban legend, the next climbing party on the mountain found Fuller's hair pins on the route.

Not dissuaded by her lost barrettes, Fuller went on to champion woman in mountaineering. She worked as a journalist for a local paper where she wrote extensively about her adventures, and helped found several climbing clubs, including the Washington Alpine Club in 1891 and the Portland-based Mazamas in 1894 (formed while on Oregon’s Mount Hood). In 1897 she would climb Rainier once more, again spending the night on the summit. Fuller died in 1958 at the age of 88. Fay Peak, which overlooks Mowich Lake, is named for her.

Known for most of her life as an “accidental adventurer,” Barbara Washburn was born in the Boston area. After graduating from Smith College, she took courses at Harvard University and worked as a secretary for the New England Museum of Natural History (now the Boston Museum of Science) where she met her husband, Bradford Washburn, then the director of the museum.

After they married in 1940, the Washburns often worked together in mountaineering, exploring, mapping, and museum administration. In 1947 they climbed Denali together, making her the first woman to stand on the summit of North America’s tallest peak—which, according to interviews, she didn’t realize until after their ascent. She typically accompanied her husband on his expeditions, and contributed to his work at the Boston Museum of Science. Together they completed a large-scale map of the Grand Canyon, published as a National Geographic magazine supplement in July 1978. In 1981, the Washburns produced the most detailed and accurate map ever made of Mount Everest.

During her almost 100-year lifespan, Washburn quietly helped redefine expectations about gender roles and adventure. "Like most women of my generation, I'd been raised to believe that my place was in the home," she wrote in Alpinist 24. "Yet in the end, the places where I would make that home wouldn't always be in warm Massachusetts suburban houses, surrounded by the bright voices of our children. Sometimes that home would be in an igloo, at 12,000 feet, sharing Tang-flavored fig pudding with my husband; or as the lightest climber going first to test the cornices on a narrow exposed ridge; or staring out at summit views that no one else had seen."

When Miriam Underhill started leading some of the steepest routes in the Alps, guideless climbing was becoming increasingly mainstream — but only for men. “The essence of guideless climbing consists in taking upon oneself the entire responsibility for carrying the climb through to a successful finish,” Underhill wrote in a 1934 National Geographic essay. “This is a lot of fun, and I saw no reason why this pleasure should be closed to women.” So she decided to undertake a “climb sans hommes” of one of the most striking mountains in France: The Grépon, a steep granite spire in the Mont Blanc Massif.

Her training as a young alpinist in New England had prepared her well for her European adventures, and she had spent many summers adding new summits to her ever-growing resume: the first-ever traverse from the Aiguilles du Diable to Mont Blanc du Tacul, a climb requiring five separate summits each above 4,000 meters; the third-ever ascent of the northeast face of the Finsteraarhorn, the famous peak’s most difficult route. Her experience had prepared her well for The Grepon, and she and her partner Alice Damesme successfully stood on the summit in the summer of 1927.

Later, French climber Etienne Bruhl famously shook his head and said, “The Grépon has disappeared. Now that it has been done by two women alone, no self-respecting man can undertake it. A pity, too, because it used to be a very good climb.” Undeterred by the insult, Underhill went on to complete the first manless climb of the Matterhorn, which friends planned a reception to celebrate. In typical style, Underhill skipped her own party to go climbing.

For forty years after Tenzing Norgay Sherpa and Sir Edmund Hillary climbed Mount Everest, the world’s highest peak was still untouched by Nepali women. Many Sherpa men had climbed it, and more than a dozen women from around the world had stood atop the roof of the world. But it wasn’t until 1993 that Pasang Lhamu Sherpa became the first Nepali woman to climb the peak locals call “Chomolungma.”

Pasang was born into poverty, but worked tirelessly to start one of Nepal’s first Sherpa-owned trekking companies with her husband. They faced many hurdles in getting permits from the government, but after the 1990 political reorganization created a newfound democracy in the country, Pasang began to direct her ambitions toward Mount Everest. She was initially dismissed, then was given a spot on a French expedition in 1990—where she was asked to stay at base camp while the rest of the team climbed.

Finally, after two more failed attempts, Pasang put together the first-ever Sherpa expedition in 1993. Eventually, on April 22, 1993, Pasang did summit Everest. It was a glorious day for Nepal, but the light quickly vanished when Pasang died on her descent. Her body was recovered, and Sherpa women still speak of her with admiration and respect. “When I told my father that I wanted to work in the mountains,” reflected one young Sherpa girl, “he told me it was impossible. So I told him the story of Pasang.”

You’ve probably heard of Arlene Blum: in 1978, she led a team of 13 women to the summit of Annapurna I (26,545′). At the time, only eight men had ever summited the Himalayan peak, making Blum’s team both the first all-women’s team and the first American expedition to stand on top of the mountain. The team famously funded their adventure by selling T-shirts with the now-classic slogan “A Woman’s Place Is On Top.” (Heh!)

But even if you’ve seen those t-shirts at the climbing gym, there are things you might not know about Arlene Blum. Before her adventures on Annapurna, she led the first women’s team up Mount McKinley (called the “Denali Damsels”) in 1970, and in 1976 she helped organize the second American expedition to Mount Everest. No American woman had yet tried to climb the world’s tallest peak, and she became the first to make an attempt. Later she completed the Great Himalayan Traverse across the Bhutan, Nepal, and India, and hiked the European Alps with her baby daughter on her back. She is the author of Annapurna: A Woman’s Place and Breaking Trail: A Climbing Life.

When she’s not in the mountains, Blum is a biophysical chemist, and she works as the Executive Director of the Green Science Policy Institute, which brings together business, government, scientists and citizens groups to support chemical policies to protect human and environmental health. Blum’s research and policy work has contributed to preventing the use of flame retardants and other harmful chemicals in children’s sleepwear, furniture, electronics, and other products world-wide. When asked if she is currently dreaming about a mountain, she states that her current goals are to educate decision makers and the public to reduce the use of entire classes of harmful chemicals.