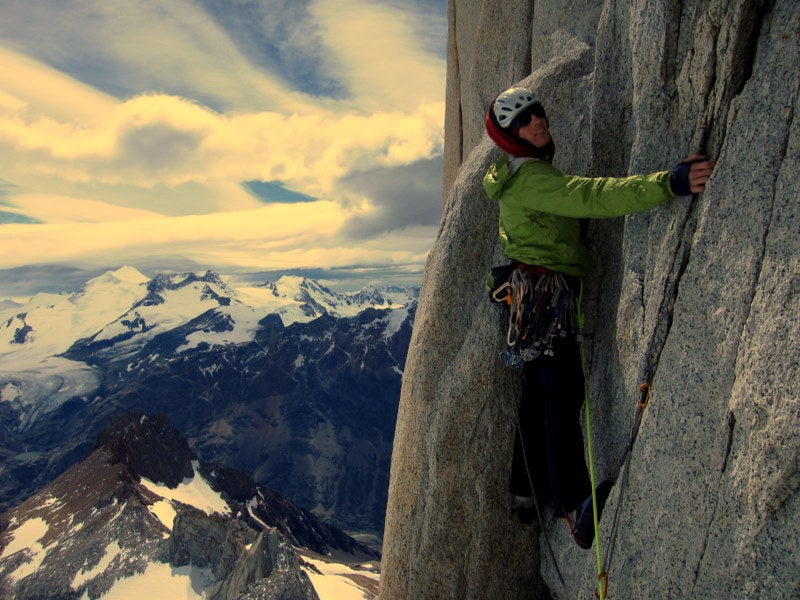 It was my second time in Patagonia. It was my friend Scott's first. Based on my first trip, I thought I knew what to expect: Rain every day, ceaseless wind, driving snow, occasional 16-hour sun breaks...

But not for us, not this year, not in February. Despite my constant and dour prognostications, we were fortunate to have a whole month in Patagonia, during which good weather that was found in relative abundance. (Or about half of the days.)

With a two or three day period of calm weather arriving above the Fitz Roy range immediately after Scott and I arrived below it, we set our sights on a new route that we hoped would dry off quickly and be manageable in a day.

The west face of Aguja (needle/spire) Guillaumet is between 1,400' and 1,700' tall, a small, accessible--and by all accounts splitter--chunk of granite on the range's northernmost mountain. And after a day to approach the peak, navigate the rock and glacier to its base, and kick steps across the steep snowfield beneath the peak, Scott and I were psyched.

We awoke in the dark, equally motivated by the instant coffee, rock'n'roll from our iPod, and visions of stellar granite we'd glimpsed the day before. I took the first lead block, tackling a steepening corner and crack system in gloves and approach shoes. But as the climbing got harder and the morning air warmed (or was it just adrenaline?) I stuffed the gloves inside my jacket and switched to rock shoes to deal with an "oomphy" chimney slot.

Scott took over for the route's signature feature, a roof and hanging chimney that allowed us to climb up through the mountain's band of overhanging orange granite. With no rock gear to fit the frozen maw, and no 20-foot arm-span to reach the ice in the back for a screw placement, he ran out the chimney and got us through the day's mental crux.

Cold, windy, and paradoxically incredible free climbing led to a small stance within a rope-length of the summit ridge and topout. It was here that our four frozen hands, followed by an encounter with four frozen meters of ice-choked cracks, compelled us to "take" or hang on a pitch, and engineer a pendulum-ing rappel to avoid the icy-filled fissures. But topping out amid the twilight, with the sun setting over the continental icecap, and headlights showing down in camp, we couldn't get too upset over barely-missing the free ascent. We had summited the peak, sent a new route, and the west face still awaited a free ascent. Maybe it would be all the motivation we'd need to forget the wind, ignore the cold, and return another time.

Read about more of Blake's adventures on his blog, The Travels and Tribulations of Blake