Behind The Scenes At The Ice Climbing World Cup In Russia 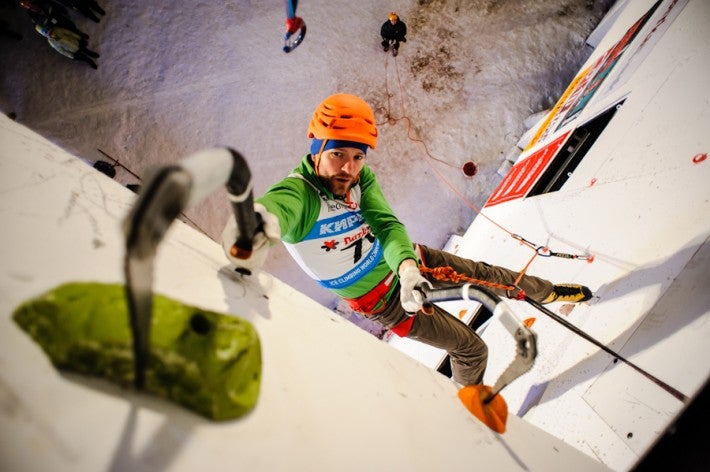 The 2013 UIAA Ice Climbing World Cup in Kirov, Russia, dished out challenges—a foreign country, frigid temps, a new format, and Russians. Lots of them. But the right focus and determination landed me where no North American has gone for the past 10 years: the semifinals.

Pavel Dobrinsky was my invaluable local training partner, briefing me on the comp structure and showing me the ropes, as Russia had changed the format of this world cup completely. Instead of only one qualifier route, there were two, and we each had to climb both. There was no difference between the men and women’s routes; we all climbed on the same holds through the same sequences. And where typically competitors would have six minutes to finish a route, the Russians gave just four minutes to cover nearly three times the distance, more than 40 moves. The temps were so frigid, they adjusted the rules so everything would move more quickly.

Also, there was no isolation, so everyone watched everyone else climb. There was no secret to how to climb the routes. There were so many holds, but pretty much only one way through them. They also had all the same holds that were on the routes laid out in order on the ground, so you could check out the holds you were going to climb. This new format, of quickly climbing two long routes, turned out to be pretty fun, and everyone else seemed to like it. Maybe it’s the way of the future.

Getting the good news

It was past midnight the first day of the competition when the list of semifinalists was finally released. I tried to to check my anticipation. With so many Russians, the likelihood of beating out enough to qualify felt like such a long shot. But when Alex, who generated the results, walked in with the list in his hand and just grinned at me, I knew right away I made it. It had been more than 10 years since a North American made the next round.

For my first route, I tried my best to warm up properly, allowing my hands to adjust to the cold, and “letting it all in”—taking in everything around me, in hopes of relaxing, breathing, and executing to my utmost. Tying in, I quickly ran my eyes from bottom to top, envisioning the movement to the chains. I counted down to myself and left the ground. Everything was flowing, my tools were precise, my feet where they needed to be. Hold after hold, I felt like I was flying. I wasn’t getting pumped, my hands weren’t numbing out. For the first time, I felt like I was climbing like I could.

It was colder when I tied in for the second route an hour later, and my arms weren’t fully recovered. But I gave it everything I had. When I was lowered off both routes, my fellow climbers were full of high-fives, congratulating me on two solid efforts. What did that mean? Was it good enough? This format, with the speed it required, played to the strengths of the Russians’ climbing style.

Welcome to the next level

Walking into isolation for the next round of semifinals, standing amongst the elite of the world, was wild. When I walked through the door, it didn’t matter who was from what country; there was simply a welcoming from fellow competitors for entering this elite realm.

Sticking with my usual routine, I warmed up and prepared my kit for my first-ever semifinal climb. Temps were still cold, but the sun was shining and I was psyched to the max. The route was very bouldery at the start, requiring a lot of big pulls. There was no letting up this round. No easy moves. Pull, pull, pull. Leaving the ground, I went at the route with everything in me. I executed well, pulled hard through a lot of moves, but then came off a tricky hold. I wasn’t disappointed, bummed, or angry—I was grinning from ear to ear, because I had the opportunity to climb with the top 20 ice climbers in the world. To make this round, against so many great competitors, against so many strong Russians, in Russia, with a new format, brought its own satisfaction.