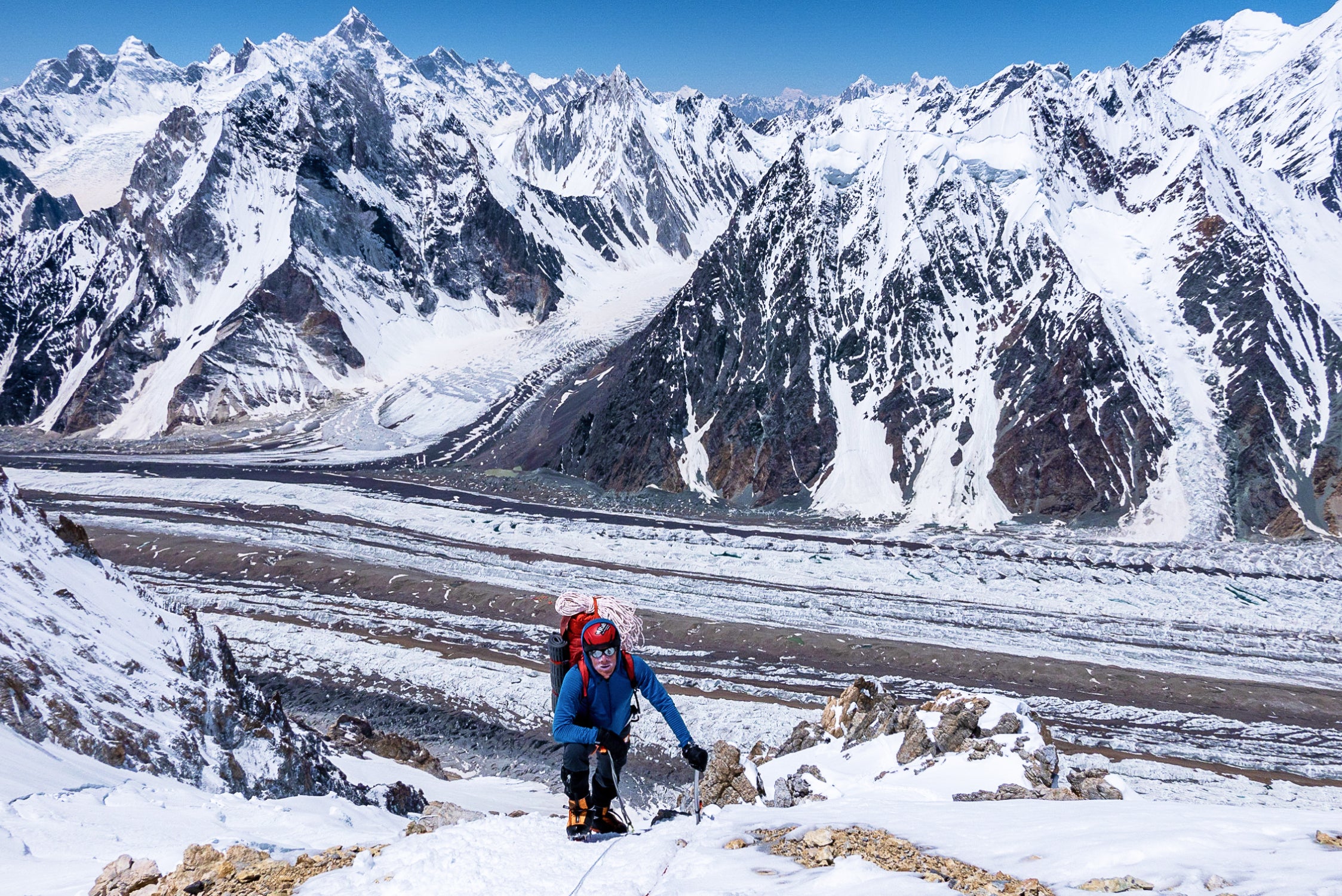 Last year, Outdoor Research Ambassador and world-renowned alpinist Graham Zimmerman attempted to reach the summit of K2 via an alpine style ascent of the West Ridge. We sent him off with good luck and our latest innovation in rain protection: the Helium AscentShell Jacket.

Graham returned from K2 safe, happy with his team, yet disturbed by the reason they aborted their summit attempt.

We had the chance to sit down with Graham and talk about the role that climate change played on their expedition, along with the ways that Graham approaches climate activism beyond the mountains today.

Related: When Climbing Is Not Enough

Graham and his climbing partner Ian Welsted both showed up to the Pakistani Karakoram as strong as they hoped to be, and with just the right equipment. Graham says that everything that could be prepared was prepared, down to the micro discussions of rope systems and which crampons to use, and how many pairs of long underwear he planned to wear at varying altitudes.

“Our whole goal there was to acclimatize without taxing ourselves too hard, so we were taking our rest and our snacks very seriously.”

After a month of acclimatizing at base camp, it was time to give the route a try.

The first night, they had a stunning night of climbing. Graham calls the first night on the route one of the most special nights of climbing that he’s ever had. It was a pleasant evening; it wasn’t that cold. The conditions for climbing were good. They covered a lot of ground, climbing under a full moon.

On the third day, they reached an altitude – 6,500 meters – where it’s generally cool enough to be safe to climb during the day. They set off early that morning, but by 9:00am they felt the heat. At 23,000 feet, Graham was getting readings between 50- and 55-degrees Fahrenheit on his smartwatch. These conditions prohibited them from moving further up the mountain into less forgiving terrain: Rock walls collapsing and snowfields sloughing off avalanches.

Graham and Ian spent a day at 7,000 meters sitting and gathering information. They tried to think of every possible feasible alternative and couldn’t get past the fact that the extremely high temperatures made continuing their objective unsafe and impossible.

Even with a month left of their expedition, the temperatures held up and conditions never allowed them to reattempt K2. Graham spent two weeks descending from base camp and then traveling home, stewing on the outcomes from the trip: The time investment, financial investment, and time away from home. And ultimately, he conceded.

“The goals of the expedition were to come home safe, come home [as] friends, and come home having made the summit, in that order. So we got two of out of three, and we nailed our two highest priorities, so that’s great.”

Graham first started thinking about climbing the West Ridge of K2 five years ago. Since returning from the mountain and ruminating on the years in between, Graham’s been thinking about stoic philosophy and understanding what you can control and what you can’t.

“On these bigger objectives... the preparation, the things you can control, take a ton of time. But then the uncontrollables are much larger.”

Their months of controlled planning hinged on the uncontrolled parts of their expedition going smoothly. The uncontrollable aspect of temperature ended up thwarting their summit push in part because of a controlled decision:  The decision to turn back.

Had they decided to continue on in unsafe conditions, Graham and Ian knew their decision would more than likely result in them both getting killed. Graham acknowledges this consciousness by reflecting on his personal growth throughout his climbing career:

“Early on [in my climbing career], my personal maturity level was not at a point where I could handle putting that much investment into a project... Now, I’ve reached a point where it feels like I can make decisions that will not get me killed, and that’s a really good thing.”

One thing that hasn’t changed about Graham throughout this time is his natural ability to self-motivate.

Graham says that when people ask him what makes him a good alpinist, his answer doesn’t have to do with his climbing ability. He’s never had to drum up motivation in himself, it’s just something that’s “always been there.” He sleeps well and eats well at altitude, two more key motivating factors that makes it easier to focus on challenging moves and onsighting hard pitches.

“As I look at my future, I will continue to be motivated to train and climb and prepare... What I’m trying to learn to do [is to] repurpose a little bit of that motivation to work on climate.”

The devastating effects of climate change were as clear as ever for Graham when he descended from K2. How does he remain positive and have hope for the future of climate when it feels so out of our control? That’s part of Graham’s off-mountain work.

“When it comes to something like climate, we should understand what our strengths are and how to utilize them.”

Graham says his strength is crafting big-picture narratives about how to create change. He says he’s going to be the person to come in and say; “Here is how I think we can create change, here is why, and here is the narrative of how we create that change.”

Now, he uses his platform to speak to younger generations about what they want to do and what they can do, defining their strengths, motivations, and finding a confluence between those things to become as effective as possible.

Related: Outdoor Research Responsibility – Our Commitment to All People and the Planet

When they first started dating, Graham’s partner Shannon sat him down to talk him through the concept of an off season.

After K2, Graham gave himself some time off to physically and mentally recover. And as he continues to work towards issues of climate justice, he recognizes the importance of creating this “off season” space for himself and for others who are doing this work.

Graham’s story is about more than the tradition “we came, we conquered, and we went home” narrative perpetuated throughout the outdoor community.

His is a story about controllables, uncontrollables, and what happens in the time after the adventure. It’s a story about finding motivation after a first-hand account of climate crisis. And, it’s about seeking solutions, sharing experiences, and inspiring others to do the same.

Graham Zimmerman is a climate activist, content producer, and climber. He’s also the climbing ambassador lead for our team here at Outdoor Research. Follow our Verticulture blog for more stories like Graham’s, and rock his favorite K2 gear when you shop the Helium AscentShell Collection.