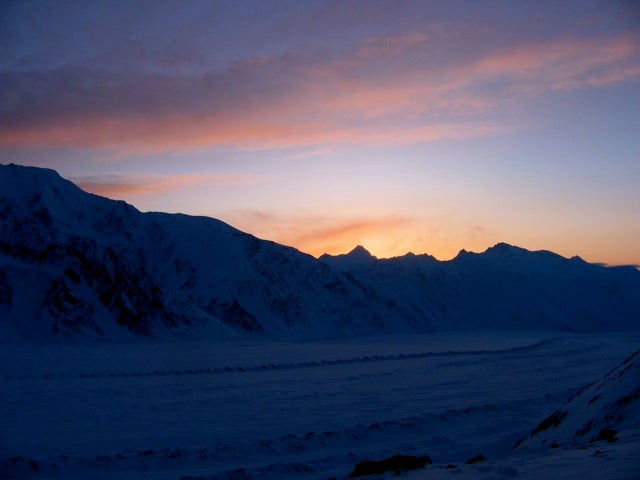 Here in Alaska there has been a warm snap. Above freezing temperatures and liquid precipitation has wreaked havoc on the snowpack. A slide closed the Seward Highway for a day just south of Girdwood. All I can do is wonder what mother nature has in store for us this year.

Last year the eruption of Redoubt with its apocalyptic display of ash and electricity quashed our plan to ski in the Neacola Range and forced us to resort to plan B, a trip to the Scandinavia Range in the Chugach. With commanding views of Marcus Baker and excellent terrain in the area it seemed to be a good option. The trip was great and some ski objectives were completed. We summitted and descended Greenland Peak. Made strong attempts on Finland and Norway peaks as well as two shots at the NW couloir off the shoulder of Denmark Peak. The breakable crust and questionable stability as the slope angle ramped up made those two attempts fall short. The only thing missing was quality snow. The thin pack made for hop turns through sharks’ fins and light footed turns on variably breakable crust rather than classic high speed big mountain descents but a great trip none the less.

So I reminisce about that trip and what some of the descents could have been like in better condition. But mostly thinking about how great it was to have such a talented group of skiers with the strength to make the most out of what ended up being a mountaineering trip instead. It was nice to be there with individuals with the determination to tackle the most aesthetic lines that were taunting us from camp in spite of the poor conditions.

This year has new potential. Even as I write this, the snow is starting to fall outside again. The temperature is dropping along with the barometer and winter is returning to the 49th state. This is good news. We have new plans for the Neacolas. Better researched and bolder in our goals we are headed to a region that has seen fewer visitors than the International Space Station, with our sites set on several first ascents/descents in this drainage. Look for more updates, as the trip approaches and planning and preparation gets underway. As long as the conditions hold and Mt. Redoubt stays docile there should be much to muse over come next February.