How To Convert Your Anti-Bouldering Parents 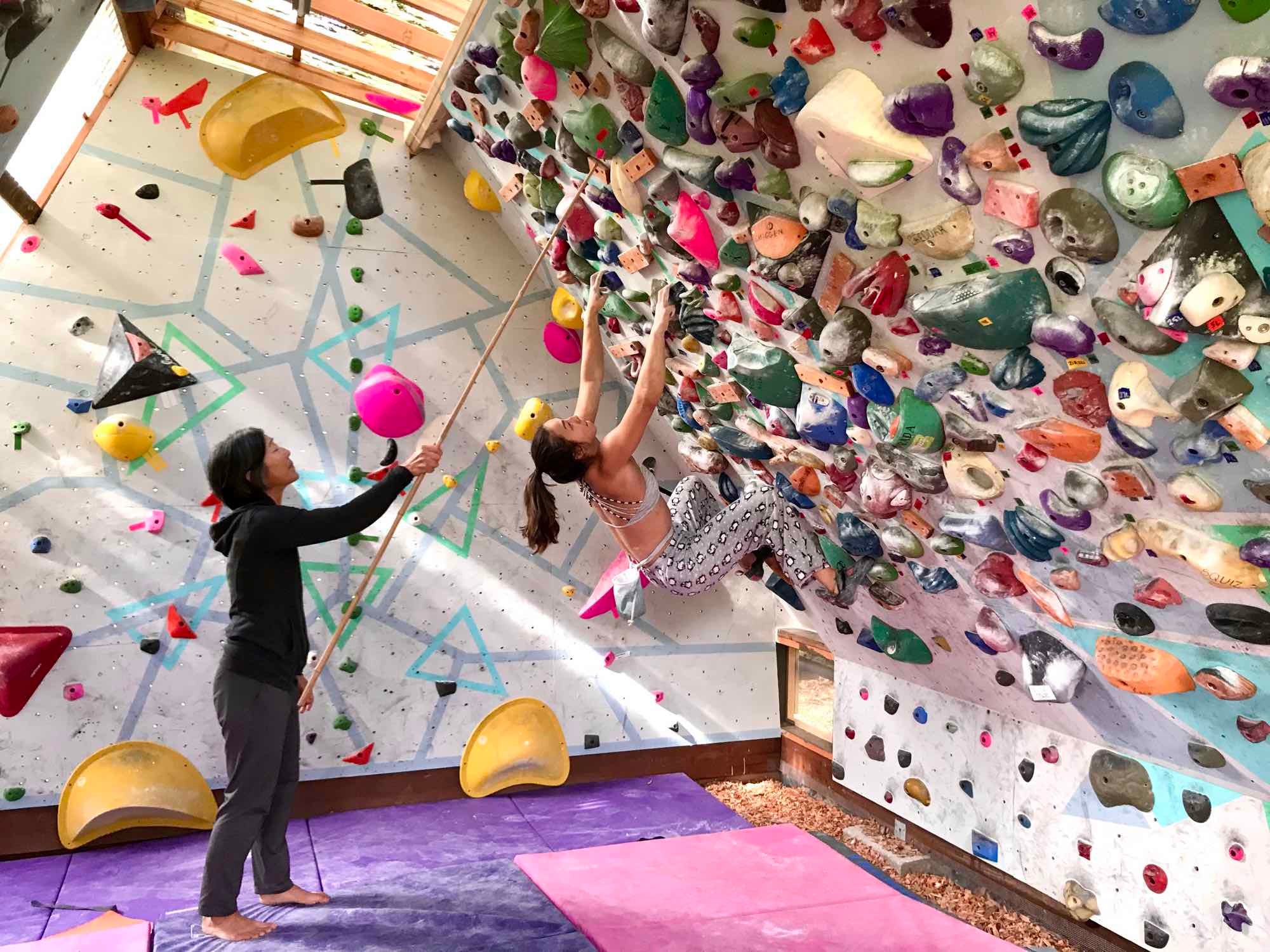 It took a pandemic lockdown, but Quinn Mason turned her old-school parents on to bouldering in a big way.

That used to be Laura Domoto’s catch phrase. Strolling into Vertical World in Seattle with her husband Don Mason, she would do a quick scan of the bouldering area to see if any of their friends were there. “If they were, I would physically go and grab them and say, ‘Come on, get your harness. We're going climbing. Bouldering's dangerous—you're too old to be in here,’ ” Laura says.

The pandemic and a move left Laura and Don far from their longtime sport climbing stomping grounds with no way to stay in shape for climbing—which they’d been doing together since they met, almost 30 years ago.

Quinn has been competing—bouldering and sport climbing on a national level—since age 7. So Laura and Don had a basic 12 by 12 foot bouldering wall in their backyard for her to train on when she visited.

“Originally, the home wall was just for me,” Quinn says. “So all the climbs on there were really hard.”

When it looked like it might be months before the family could get back to the gym or the crag, they went to work on that home wall, transforming it into a dreamy three-dimensional training space for all of them, sheltered from the Pacific Northwest weather. When the holds were hung, Laura and Don immediately found themselves becoming—gasp!—boulderers.

The two had occasionally joined their daughters, Quinn and Cameron, for bouldering days in Bishop, but mostly to watch and be a part of the community and the scene—which was very different from the more isolated vibe of trad and sport climbing they were used to. Bouldering seemed like an easy way to sprain an ankle or develop an overuse injury by trying the same move over and over, Laura says. But the home climbing cave changed everything.

“It quickly changed my impression of bouldering,” Laura says. “It's just changed the way I view training and the problem-solving aspects of boulders. I find it to be super engaging in a way that I had never appreciated it could be before.”

The holds were secondhand, smaller than what Laura and Don might have picked out themselves, but with Quinn’s help, they had a series of circuits to train on, ranging from easy to “undoable.”

Laura says the bouldering training has shifted her perspective on sport climbing, too, helping put difficult moves on larger routes into perspective.

“I put it in context of bouldering grades,” Laura says. “Like, that's probably a V4 move—I can do a V4 move. Whereas before I didn't actually know what a V4 move was.”

Their progress in training has also given Laura and Don a more personal understanding of their daughter’s skills, and a new bond.

“It's mind blowing to watch her set [boulder problems],” Don says. “How quickly she sets and figures out problems for all of us.”

They knew that, as a coach, Quinn had been setting problems for the younger members of the Vertical World team, but climbing her problems themselves gave a more tangible awareness of her growing skill. Laura and Don are six inches apart in height and have diverse strengths, weaknesses and styles—so building routes for both of them in that small space is an added challenge. Quinn likes to set problems that are similar to what her parents have been watching her compete on over the years, giving them a little taste of her own climbing style.

Laura and Don send photos and videos of themselves climbing to Quinn in Salt Lake City, and Quinn responds with advice. The benefits go both ways, forcing Quinn to think more intentionally about body movement.

“For years I've only really climbed with my intuition,” Quinn says. “Which has worked through my youth career. But as I’m approaching adult circuits, it's definitely helpful to be able to think more outside of just what feels natural and right.”

Explaining things as a coach, putting instructions into words for people who’ve never really bouldered before, has made Quinn more aware of how climbing movement works in general.

Quinn still gets a good laugh at how her mom used to trash talk bouldering, calling it “pebble wrestling.” Though Laura and Don are excited to dive back into other types of climbing, too, it looks like bouldering is here to stay.

“I think we're going to boulder as long as our bodies will allow,” says Don.