How To Layer For Ice Climbing 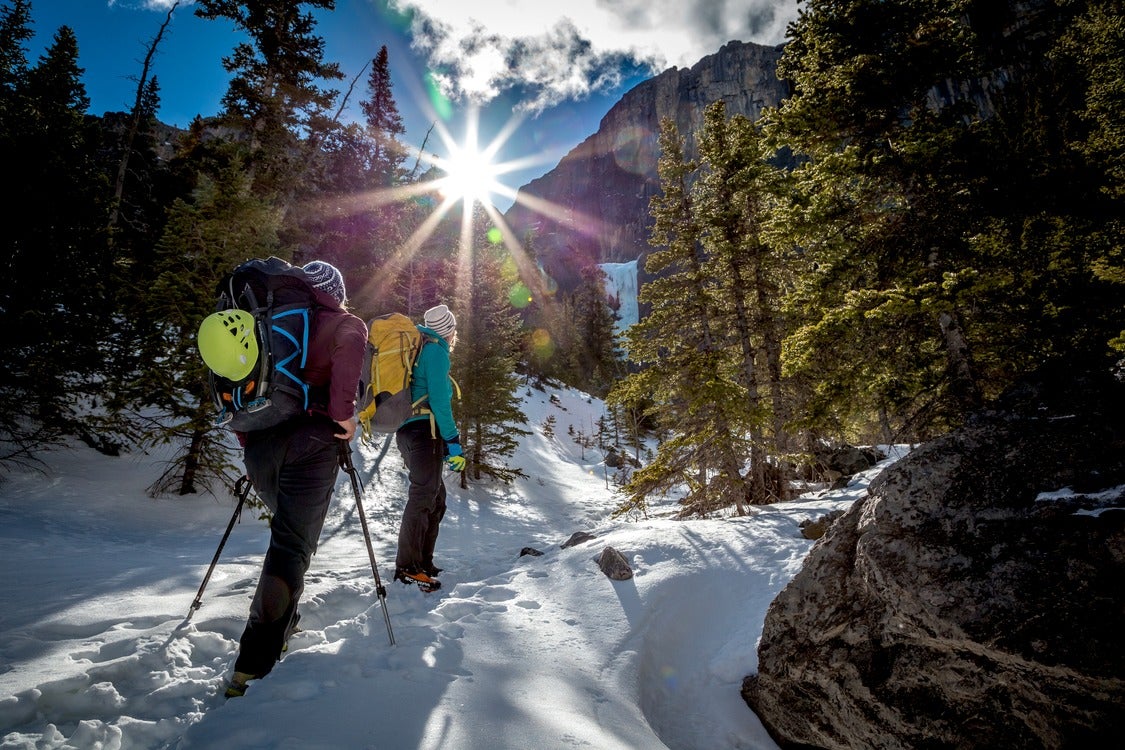 As a climber and a mountain guide, Dawn Glanc has seen it all—and she made plenty of her own mistakes in the mountains, too, when she was getting started. Like the time she wore fleece pants with a drawstring underneath her climbing pants, only to have her frozen fingers unable to untie the drawstring when it came time to go to the bathroom. Through trial and error, she's figured out what works for ice climbing, both in an ice park and in the backcountry. Here is the best of her hard-won advice for how to layer for ice climbing.

First, know that everyone is afraid of being cold.
"I have been doing this for so long, and everyone has the same fear: 'I can’t do it, because I can’t be cold,' " Dawn says. "And they think [we guides] somehow magically stay warm, and that they just don’t have the magic. It’s normal to feel afraid of feeling cold." But investing in the right clothes and paying close attention to how you layer can make a huge difference, she says.

Figure out a system that lets you go to the bathroom easily.
"Whatever your system is, you need your basic functions need to be met," she explains, telling the story of when she first started ice climbing: When all the men she went climbing with all wore onesies, she did too—only to realize it required her to peel off all her other layers, too, in order to relieve herself.

Pass on the bra and underwear.
"You don’t need to wear a bra and underwear in the wintertime," Dawn says. "It will trap moisture—they will just be wet. A padded bra will not dry. If you’re going ice climbing, you won’t be running or jumping. Tuck your first shirt in tighter. Same with underwear—if you hike, it gets all sweaty."

Keep your top versatile.
Dawn begins with a half-zip top that goes higher on the neck—like the Alpine Onset Zip Top—that can be used with a neck gaiter. That way, she can open it up for the hike in. On top of that, she adds a Deviator Hoody. "I wear it over the helmet," she says. "It fits tightly over my head. Then I can easily push hoods off the helmet when I’m climbing—an easy way to vent. I wear more of a skullcap and buff under my helmet. You have to play around with the system to see what’s going to work." On top of the Deviator she adds an insulating vest, which adds warmth without increasing bulk awkwardly in the arms.

Don't forget about your legs.
Dawn starts with a base layer—like the Alpine Onset pants—and then, if it's super cold doubles up on them or adds a fleece layer or tall socks, she says. That way her bottom isn't imbalance with her top. Then, she adds waterproof pants.

You can untuck for the approach—but tuck in EVERYTHING when you get to the climb.
"Tuck EVERYTHING in like an old person, bring you pants up high," she says. "Raise your arms and make sure your midsection has no way to appear—you can frostnip that spot." If you got sweaty on the approach, don't be afraid to quickly swap into a dry base layer. Just make sure it's all tucked in tightly, she says. "I tuck everything under the shell jacket—then I look cool again, with the shell and then harness over the shell."

Invest in a good shell.
For ice park days that won't be very wet, Dawn says a heavy duty soft shell will work fine, but she usually opts for a hard shell. "I want to be able to stand there for days if it’s raining down on me," she says. So she goes for jackets like the Interstellar Jacket, that's waterproof but has stretch to it. Just don't forget that a shell doesn't insulate, she says. Of course, it will hold in some heat, but it is not an insulating layer itself—that's why she layers it over the Deviator and the vest.

Don't forget the big jacket that goes over all the rest.
Dawn recommends a large, synthetic belay jacket—like the Perch Belay Parka—that you can throw on over everything else when you're not climbing.

Pay close attention to your hands.
"The same kit pretty much always goes with me," she says. "The same 80 million gloves." A more close-fitting work glove will help you grip your tools better, while warmer mitts and gloves will be necessary to keep your fingers warm when you're not climbing. And don't be afraid to stick a few toe warmers in your pockets, Dawn says.

Take time to check in for self care.
"If you’re getting cold every time ouy go out—it’s kind of your fault," Dawn says. She suggests paying close attention to what you're wearing, how you feel, and how you can make changes to stay more comfortable. Ice climbing can be overwhelming, she says, but it only takes a few mintues of self care to make sure all your layers are tucked in and you're doing everything you can to stay warm. Aside from clothes, using hand warmers, eating fatty foods and staying hydrated with warm liquids can help. "Tthere are no bonus points for losing toes or fingers for frostbite," she says. "If it’s really unbearable, nobody’s going to think anything about you if you leave. It’s better to go back to the car and warm up than to have your toes chopped off."