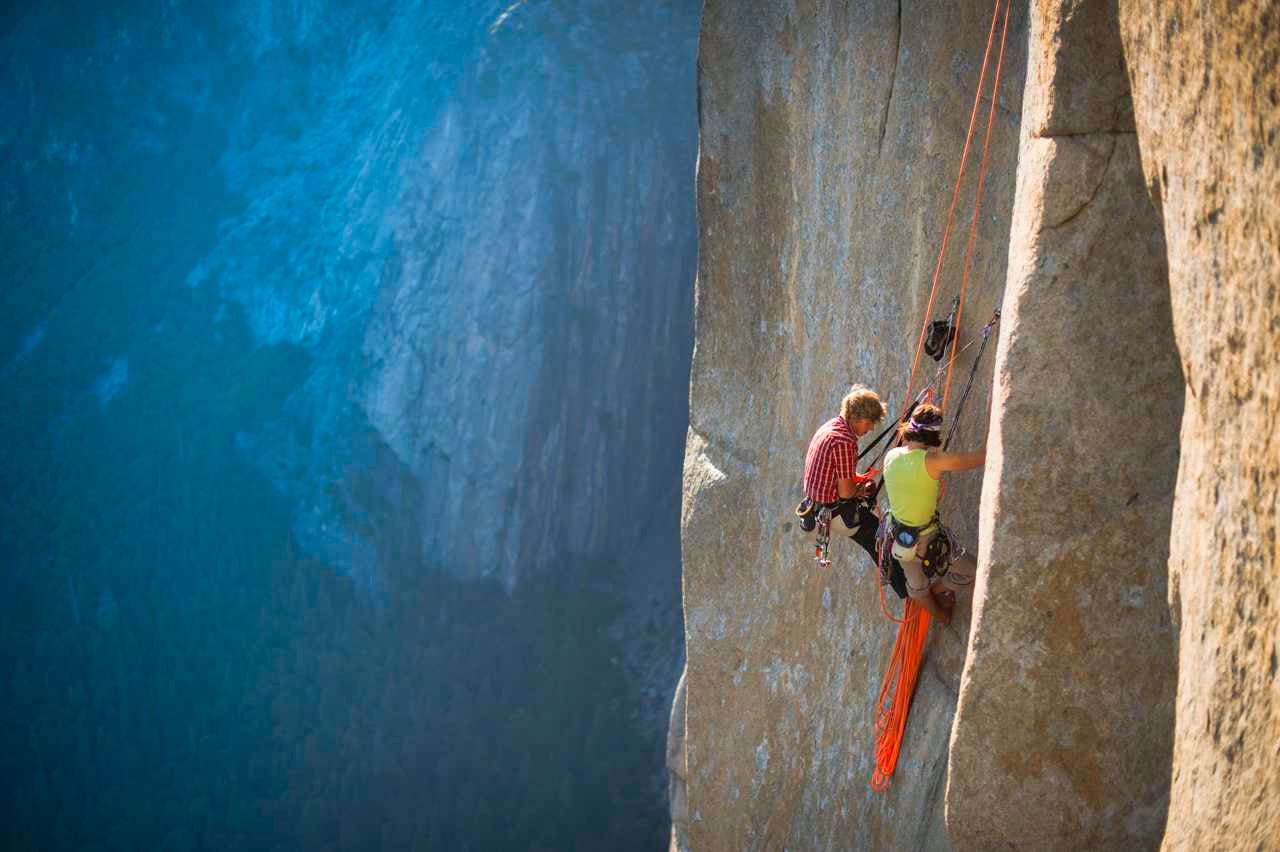 Up to that moment, it all felt too good to be true, and I was terrified I had just blown it.

In spring, 2002, after training hard to sent a project in Indian Creek, I was fired up to climb as much stuff as possible, especially considering I had a big wall trip to Greenland coming up that summer. I spent about six weeks in the Valley. I was single, and hanging out in Camp 4, I was constantly scanning for any and all available ladies. Trust me, the odds are not in your favor as a guy. But for a single girl, they say the odds are good, but sometimes the goods are odd. I imagined us men as vultures circling overhead, waiting to swoop in for an opportunity. Thankfully, that summer, I beat the odds.

Jasmin was a cute climber and skier from British Columbia. I had met her in the spring of 2001 in Camp 4, but we were both dating other people. I quickly learned that her parents owned and operated a backcountry ski lodge in BC. What, a cute girl who climbs hard, skis hard, and whose family owns a lodge in BC? Was this too good to be true? The next summer, we would hang out and run into each other climbing in Squamish, and again the next spring we crossed paths in Indian Creek. There, she literally caught me with my pants down. I was changing into shorts for an approach to an out-of-the-way cliff, thinking no one would drive up. Of course, while my pants were around my ankles, she drove up. She was in the car with some other guys she had met, but I convinced her to come cragging with me that day. It was the only day we shared in Indian Creek, and I didn’t know if we would ever see each other again.

But we travelling dirtbags all end up in the same places, so a week or so later, she strolled into Camp 4, and I knew I had a chance. What else does a climber do for a date other than say, Hey, let’s go climbing?

We made plans for tackling the classic Northeast Buttress of Higher Cathedral Spire, a long 5.9+ that we could both easily do but had never done. Thinking we had it in the bag, we started casually around 9 or 10 a.m. With no thoughts of retreat in our young cocky minds—maybe it was just my young cocky mind?—we left our second rope behind. Arriving at the base, we counted at least five or six teams ahead of us, but we started up anyway. We were cruising along, having fun, and halfway up, we caught up to everyone. There was no passing on this route, too many chimneys and small belays with parties stacked up one after the other. So we sat on a ledge, shot the shit, and enjoyed the valley, the views and each other’s company.  After a half hour or so, we gave up. There would be no summiting before dark, and neither of us had a headlamp, so we bailed. Rapping down, we only had to leave one or two pieces behind for anchors on the crowded “fifty classic.”   But halfway down on the rappels, something hit my bowels in a major way. There would be no making it back to the base first—I had to take a dump NOW! I quickly rapped down to the next small stance, two pitches above the ground, and yelled back up to Jasmin to wait for a few minutes. She was puzzled—I was mortified.

There I was, on a tiny ledge, no toilet paper, about to defile one of the most classic routes in Yosemite. So I did the best I could, wiping with small rocks and strategically squatting over a small, flat rock. Upon finishing, I took the flat rock and tossed it Frisbee style, so I would leave no waste behind on the route. Leave no trace, they say. After releasing the stinky UFO, I realized that I didn’t get the toss as far away from the wall as I had hoped. Instantly, I feared that I had just tossed my poo on my date’s backpack at the base of the wall. Jas, wondering what was going on—the lingering cluing her in—didn’t say anything, and we rapped to the ground.

Sweating and nervous that I had just ruined all of my chances, I touched down first and ran over to the packs. In some weird twist of fate, my pack was conveniently covering over Jasmin’s, so only my gear was coated in specs of poo. It didn’t take long for laughs to come out and jokes to flow freely, letting me know I still had a chance to make this all work. And now, 11 years later, we’re married and still going strong, having adventures, climbing and skiing all over the world. After that date, I knew I had a keeper.