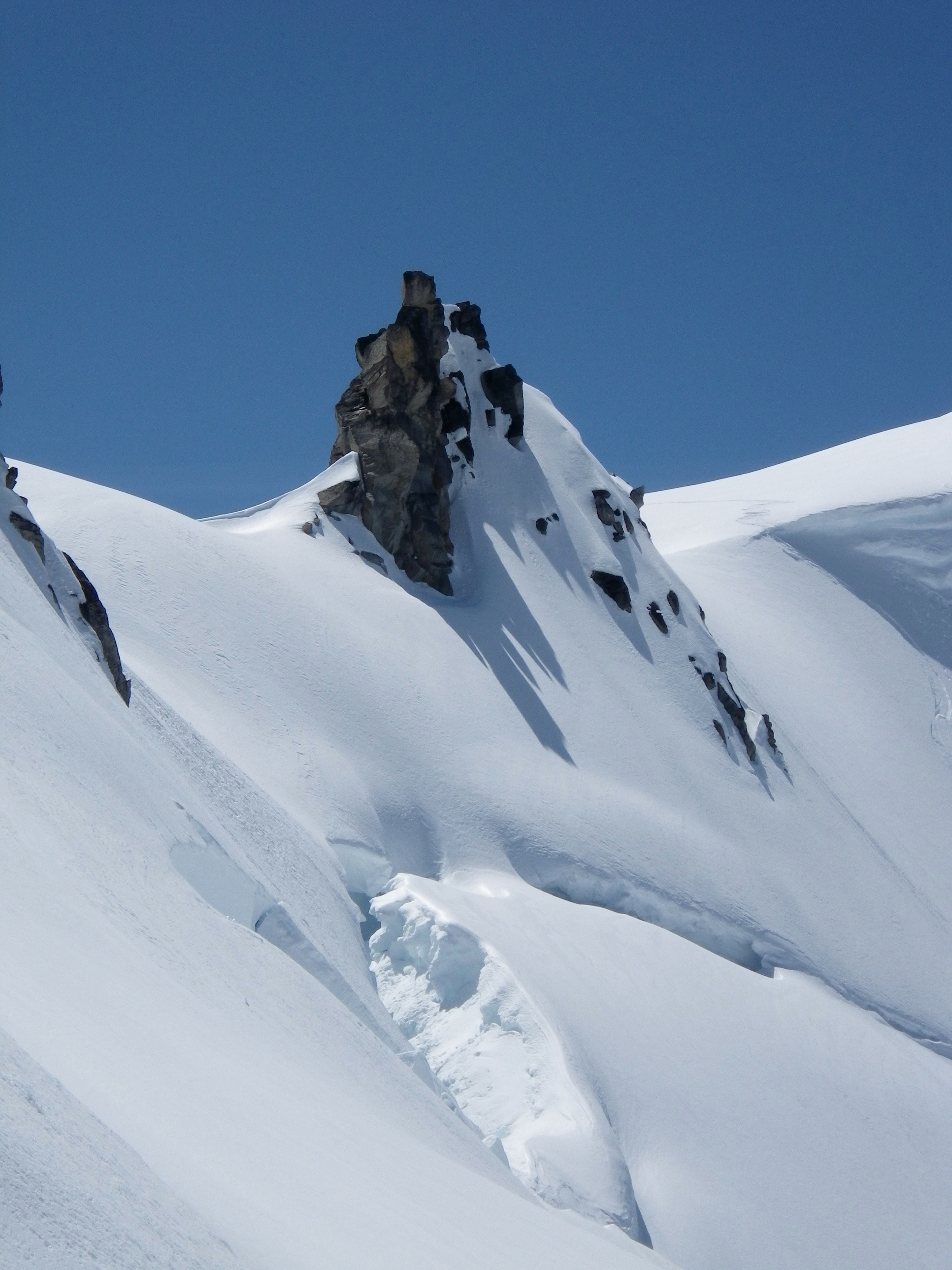 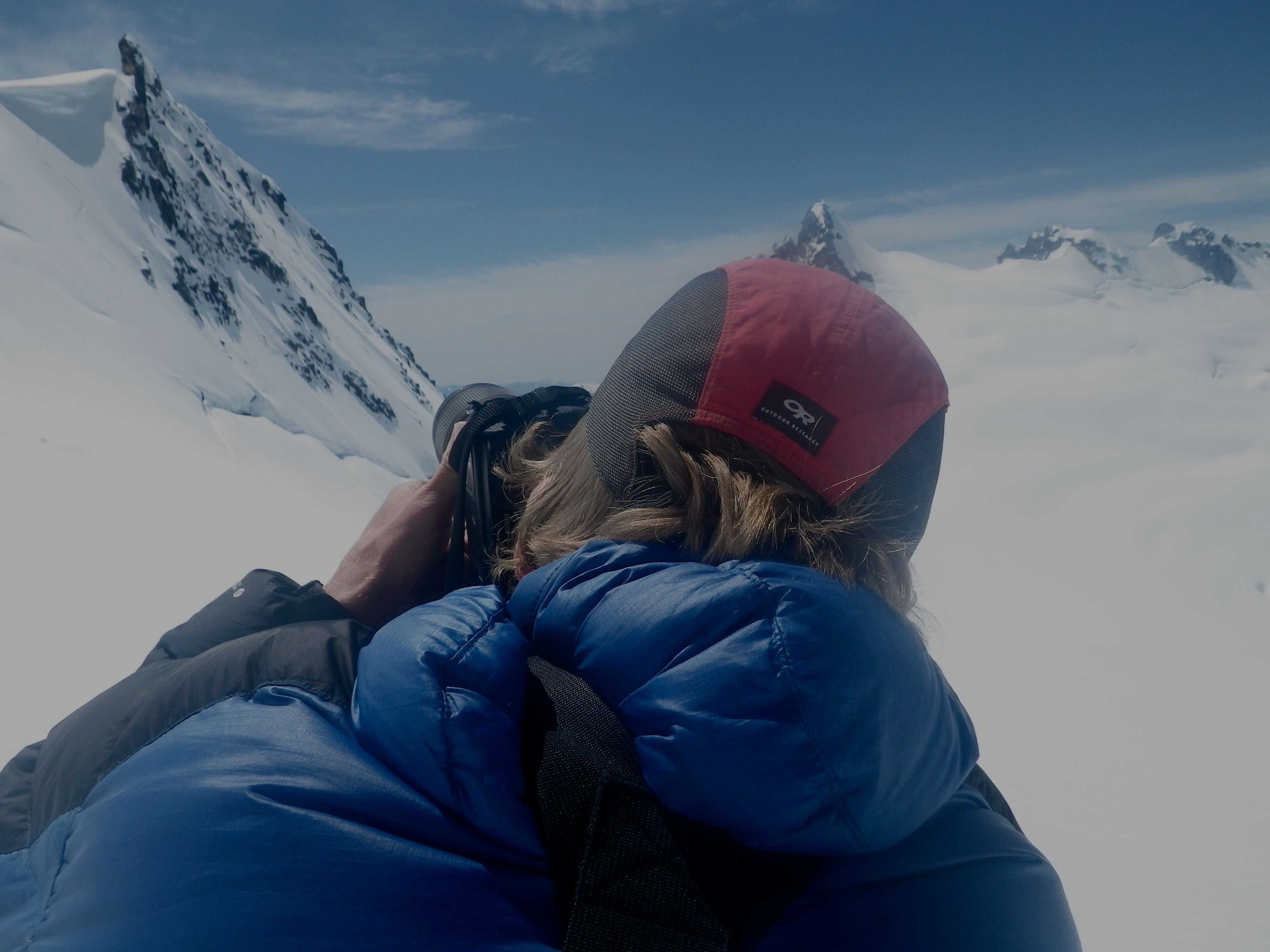 There are many reasons to venture out into the mountains; solitude and the clear mind that comes from being free of cell phones, computers, and scheduled commitments of any kind. Even eating takes on such planned simplicity that there is little decision making involved. In fact the only decisions that you must make as a ski mountaineer are those that will get you from point A to B safely and fulfilled. Our June traverse from Cascade Pass to Diablo had that simplicity: sleep, eat, ski, repeat.

Different things turn different people on about a traverse in the Cascades. For some it’s getting it done as quickly as possible, others are out there to stand on summits, for me it’s finding great snow on fun slopes whether off ridgelines, summits, or the couloirs along the route. On our Isolation Traverse we encountered everything from crust to corn and low angle glacier to steep salt and pepper.

For this crew, it’s the downhill that drives journeys into mountains. Adam Roberts, Jesse and Jason Hummel and I found everything from puckering jump turns to soul turns in corn on the glacier. It doesn’t have to be scary; turns are turns and the more the better.

Early on in the traverse we took a layover to explore the area around Eldorado. Moving across the Inspiration Glacier we came to where it met the McAllister. Looking across at Dorado Needle our eyes were drawn to a huge cornice hanging over a beautiful pitch. “Hey Adam, I’ll ro-sham-bo you for it…” but he was already on his way up the Inspiration. Beautiful turns were left on an aesthetic line as Adam ripped 7 perfect arcs down the slope. It was a line we would all ski again the next day as we continued on to Backbone Ridge.

The long gentle traverse under Backbone Ridge was the same mellow slope that the Skoogs had slowly climbed when they pioneered the route in the opposite direction so many years ago. That night, as we set up camp, the Cascades reminded us that we were in the Northwest as the clouds rolled in. Over the next few days we flew by wire using a handheld GPS past Wilcox Lakes and up and over Isolation Peak as we neared Snowfield Peak and the Neve Glacier.

On our fifth day we got to camp early and set up on the shoulder of Snowfield Peak. A blanket of low clouds left only the tallest peaks sticking out like islands. It was beautiful. We could see back over nearly our entire route from Eldorado to Dorado Needle to Backbone Ridge, Isolation Peak and the sloping snowfield that we climbed to camp. With so many hours of daylight remaining we headed up Snowfield Peak through sugary snow on scree. It was nice to gain the summit and the view it afforded us, reaching even further than our view from camp. The ski from the summit was rough with the last skiers having the hardest time picking their way between the rocks and trying to link what patches of sugar hadn’t sloughed off. We returned to camp, it was time for dinner – a simple task.

After dinner the sun was still well above the horizon. The late evening light on the slope we had climbed earlier in the day was too much to resist; corn snow on a perfect 30-degree pitch descending towards the clouds. Clouds were slowly rising and falling, pouring over the lower passes below camp giving the evening a moodiness that wasn’t quite angry, more mysterious than ominous.

So with nearly empty packs we hiked up above camp, out on to the snowfield, cheering each other on as, one at a time, we laid down turns in the late evening sun. There was nothing difficult about the skiing that evening. The snow was soft and shallow with a surfy quality that held the edge of our skis with softness you’d expect more from water in its liquid form than its crystal form. These were the quintessential soul turns that are the reason we strap boards to our feet in the first place. Even after a long day of travel it was the light that finally ended our little feel-good session. After each of us had taken 4 or 5 laps, the sun dipped below the horizon and we were left in the twilight to climb into our bags for a good night sleep before our return to civilization. Our return to said civilization was swift. The glacier gave way to glades and ravines on the shoulder of Pyramid Peak and the snow slowly dissolved into the warmth of old cedar trees and then the trail to the road where we traded our boots, Gore-Tex, and water bottles for flip-flops, t-shirts, and IPA…Classic.