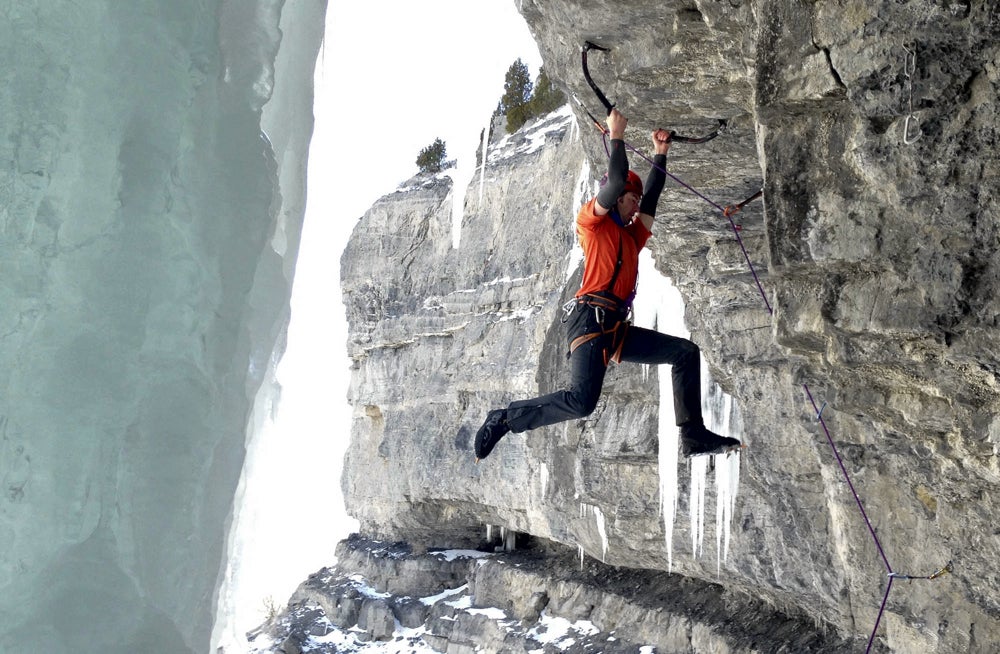 I feel like I need to stand up in front of everyone and admit that, yes, I am a mixed climber.

I am not a boulderer. At 6’4″, that’s too much crawling in the dirt only to climb back up to the height of a standing position. If I go any higher, my spotters run away, leaving me to free solo.

Sport climbing is fun, but it belongs to the children with tendons made of steel, and adults who act like children. Trad climbing still works for me. It has a nice adventure aspect to it. And ice climbing—well, ice climbing is the gateway drug that leads you to becoming a mixed climber.

When I try to explain mixed climbing to people, they usually look at me strangely. They see all my fancy spikes and crampons and ask if I’m going ice climbing. I answer, “Yes—sort of.” Then I follow up with, “We climb steep rock with our ice tools and crampons to reach big hanging icicles.” At first there’s a little light inside as people begin to puzzle together the pieces into a picture in their mind. But then sometimes I have to follow up with, “And sometimes the icicles don’t form, so we just climb the rock with our ice gear.” Then that little flickering light behind peoples’ eyes usually goes out and I end up receiving blank stares. I’ve lost them. They have no idea what to think of me or what I’m about to do, never mind how awesome it is.

But mixed climbing is not without its detractors. I’ve heard climbers say, “Why don’t you rock climb there?” or, “Don’t put those tools on my crag.” But often, I think I’d be doing them a favor, re-texturizing their precious greased-over holds with a few scratches.

In areas heavily populated by climbers—like Salt Lake City, Boulder, or Denver—damned near every rock within sight of any road has been bolted and claimed it in the name of rock climbing, Hallelujah! Often there’s nothing left for us mixed climbers but the loosest, softest, most dangerous junk you could barely call stone.

People say, “You’re aid climbing!” I have aid climbed. I have friends who are aid climbers. The way I see it, aid climbers are a bunch of socially awkward freaks that enjoy spending days away from society perched in high lofty places and shitting in paper bags. That social awkwardness also provides them with the special skill of being able to handle being terrified on sketchy leads for eight hours straight — which may by the way have longstanding mental consequences… or already has? Mixed climbing is scary too, but you’ll likely fall off long before any real mental damage has occurred.

To me, mixed climbing is medieval ninja shit. It combines everything I have learned from all of the disciplines of the sport. Imagine being in a kung fu movie, with ice axes, fighting half a dozen guys at once, even though sometimes you’re just fighting the screaming barfies. When you lose, you cry, and it’s more like a chick flick. But that’s not the image I try to keep in my mind. That just makes the experience complete and fun for boys and girls alike!