Paddling The Colorado Source To Sea 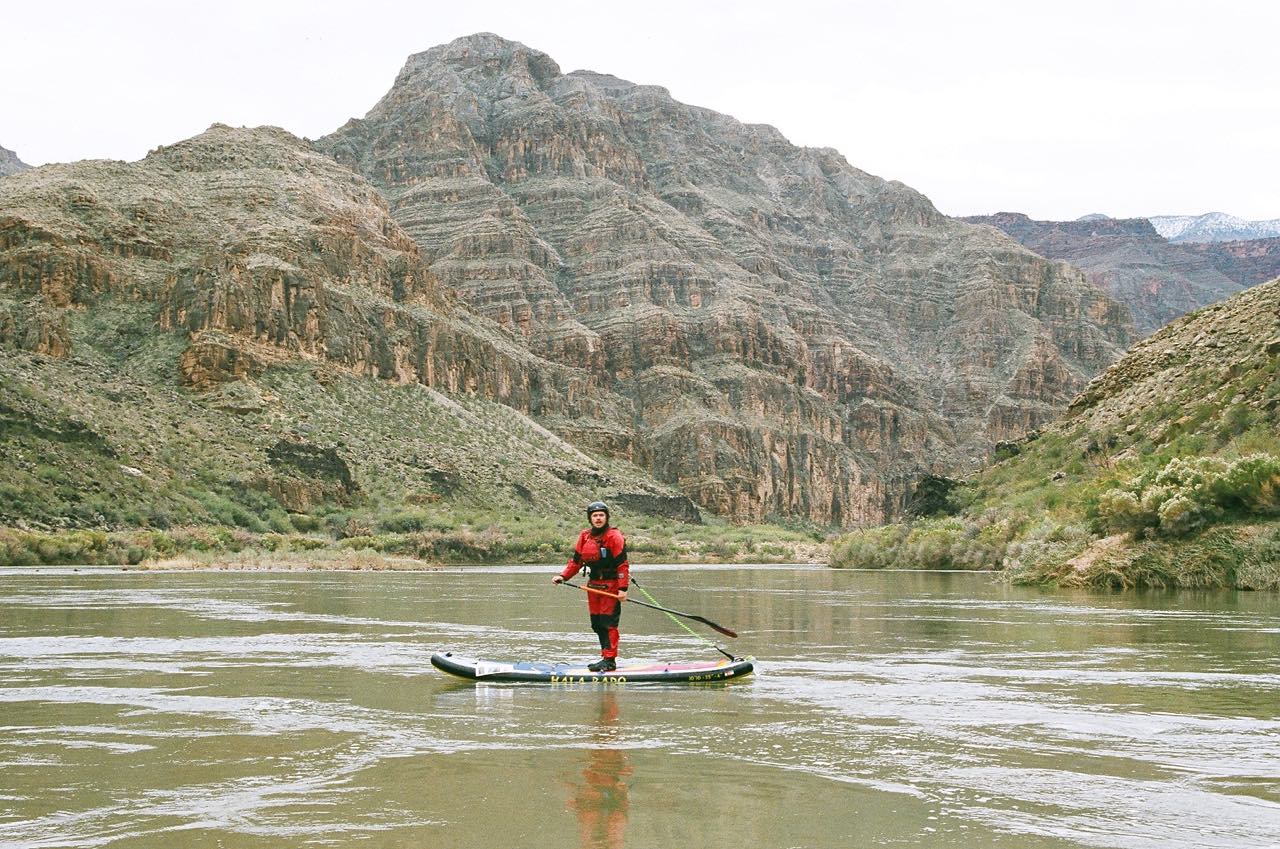 This past fall and winter, I had the chance to go standup paddleboarding (SUPing) from the furthest headwaters of the Colorado River to its terminus in the Sea of Cortez. But before departing in mid-September, I was chatting with a close friend. When I told him I was asking folks to deliver food drops and resupply us on the trip, he responded with something like, “So you’re just relying on people to do stuff for you?” Although it wasn’t intended to be negative, I took it as such, felt guilty, and quickly changed the topic. He wasn’t the only person to have this reaction. For as long as I can remember, I’ve been taught social norms of independence, figuring everything out alone, and “pulling myself up by my bootstraps.” But really, what the f*** are bootstraps?

Indeed, we’re told that asking for help is a sign of weakness, and that the mark of a good person is someone who can take on challenges by themselves. If there’s one thing that the river taught me, though, it’s that I’ll never be happy, healthy, or successful if I try to do life alone. I think it’s important to regularly reflect on the people and the places who shape our identity and help us grow.

RELATED: Paddling The Entire Delaware River With A Stranger—And Living To Illustrate It

I’m lucky enough to have figured out a lifestyle of seasonal employment in outdoor education that allows me to determine my own schedule. And while I only had a few days of SUP experience before this trip, I wanted to seize an opportunity for an adventure that might never present itself again. Paddling 1,800 miles from the alpine, into the sagebrush sea, through the desert, across many reservoirs, and into Mexico fulfilled a dream, and it would never have happened without the help of my community—both my close friends and people whom I’ve never even met. I recently sat down and took the time to write down all the names of the people who helped me, and there were 104 people—and one dog, shoutout to Kali—on the list. 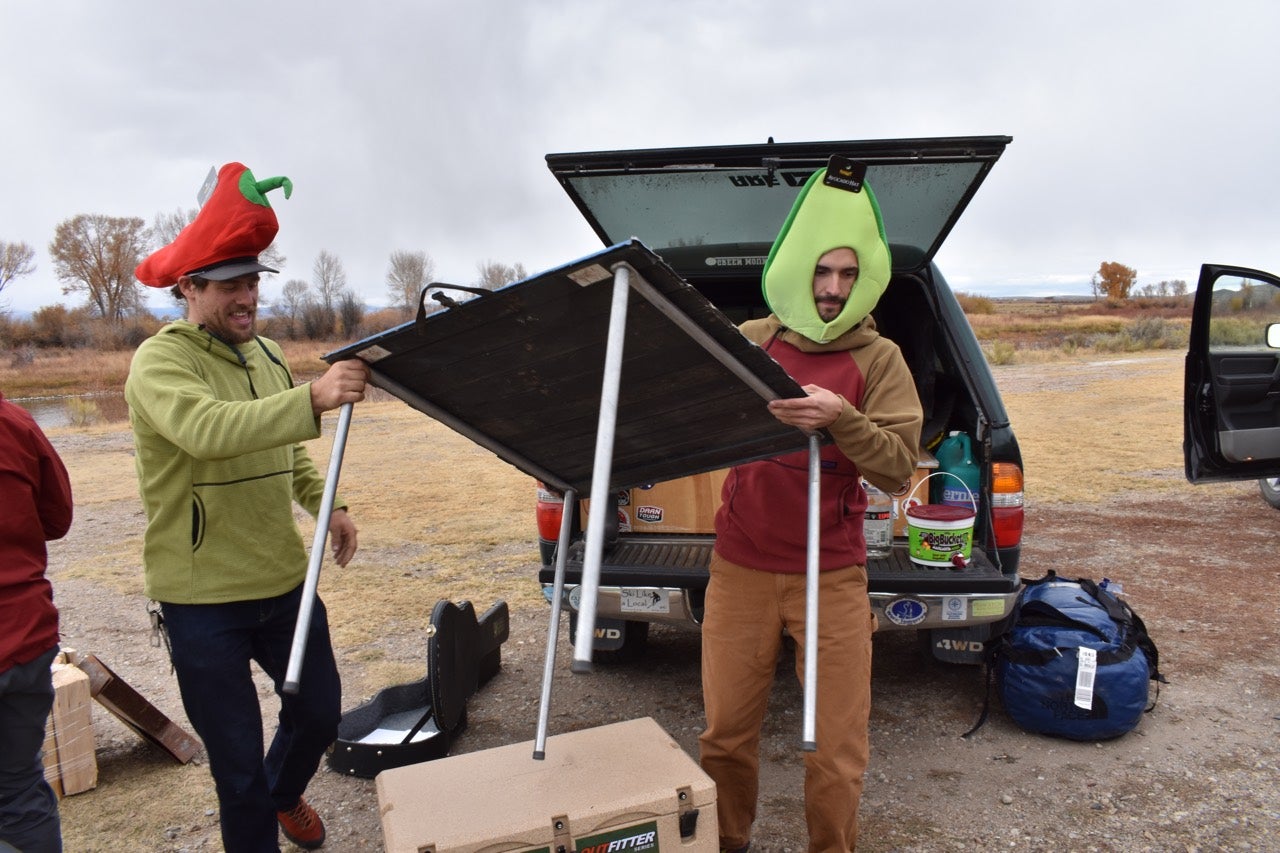 The distance from the headwaters of the Green River to the confluence with the Colorado is actually longer than the headwaters of the Colorado to the confluence with the Green. That’s why we started our Source to Sea trip in the Wind River Mountains in Wyo. After a few days of hiking, we were on the water and I was slowly learning how to SUP. It was me, Bobby, Bridget and Sabrina. In the beginning, we dragged boats over shallow water for five days before reaching the valley. Views of the Wind River Range dominated the landscape. We saw more bald eagles, moose and deer than I’ve ever encountered before. The river meandered through pastoral ranches and the sagebrush as far as the eye could see. After a tough two weeks of getting adjusted to river life, our friends Nick and AJ met us with a resupply. Instead of just bringing some fresh food, we were greeted with a taco bar, costumes, and a bucket of margaritas. It was the exact boost that we needed; after we said goodbye we paddled in our first snowstorm. A major milestone came when we reached Green River, Wyo. It’s the same place where Major John Wesley Powell began his journey down the Colorado River 150 years ago. We took nine days to cross Flaming Gorge Reservoir before getting to Utah and enjoying the first whitewater of the trip. 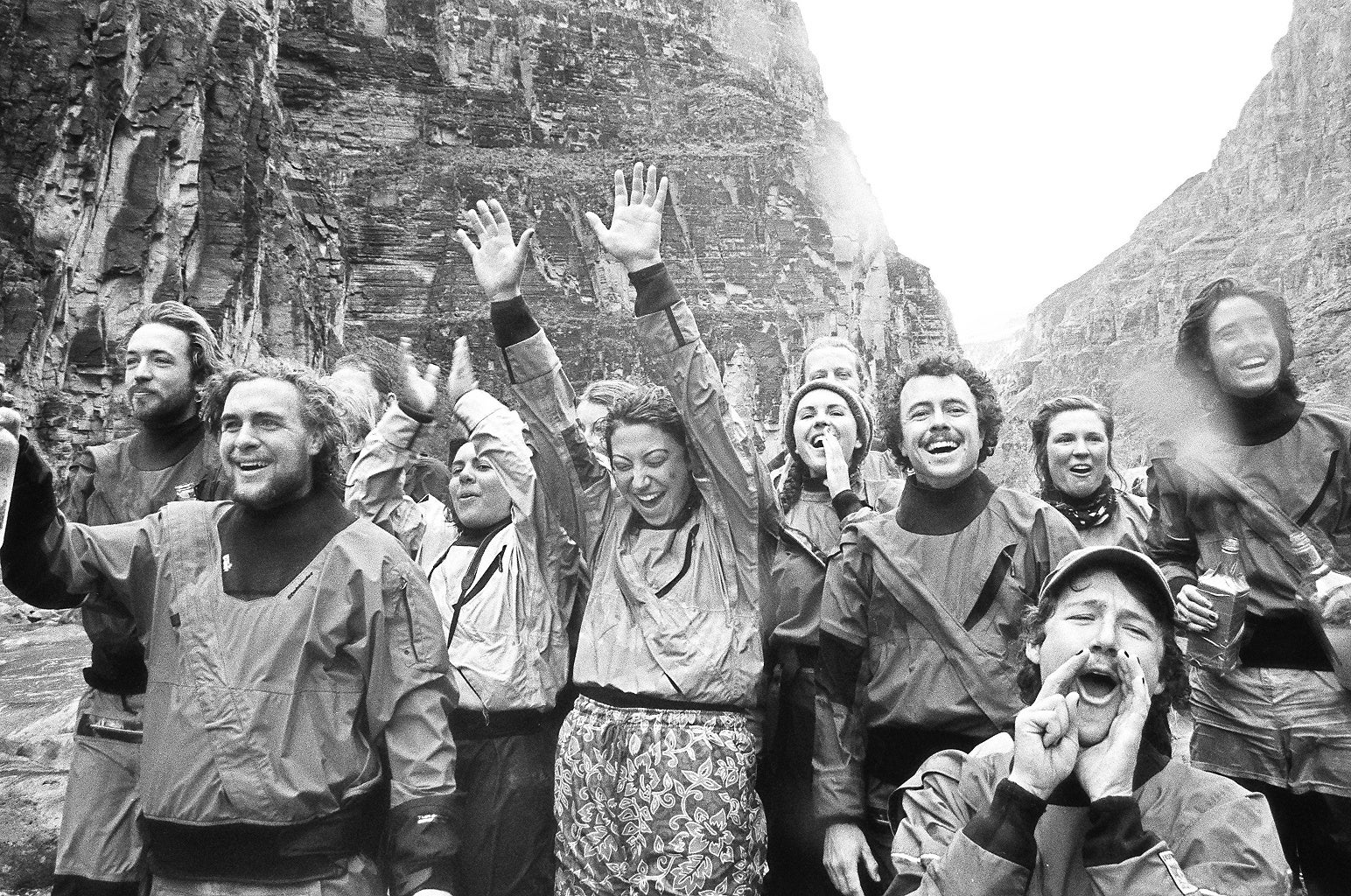 By the time we arrived in Utah, it was winter. The days were short, it was below freezing every night and daylight was a precious commodity. Fortunately, the canyon country of Utah is one of the most inspiring places on earth. In this section we also saw the most visitors on the river. Friends joined the trip at different times and we ended up with 25 people on the Gates of Lodore and nine until Canyonlands. The larger group made everything a lot more fun and a whole lot easier. The section of the Green between Dinosaur National Monument and Desolation Canyon is known as the Sand Flats. And yes, it is very sandy and very flat. It was one of the hardest parts of the whole trip. 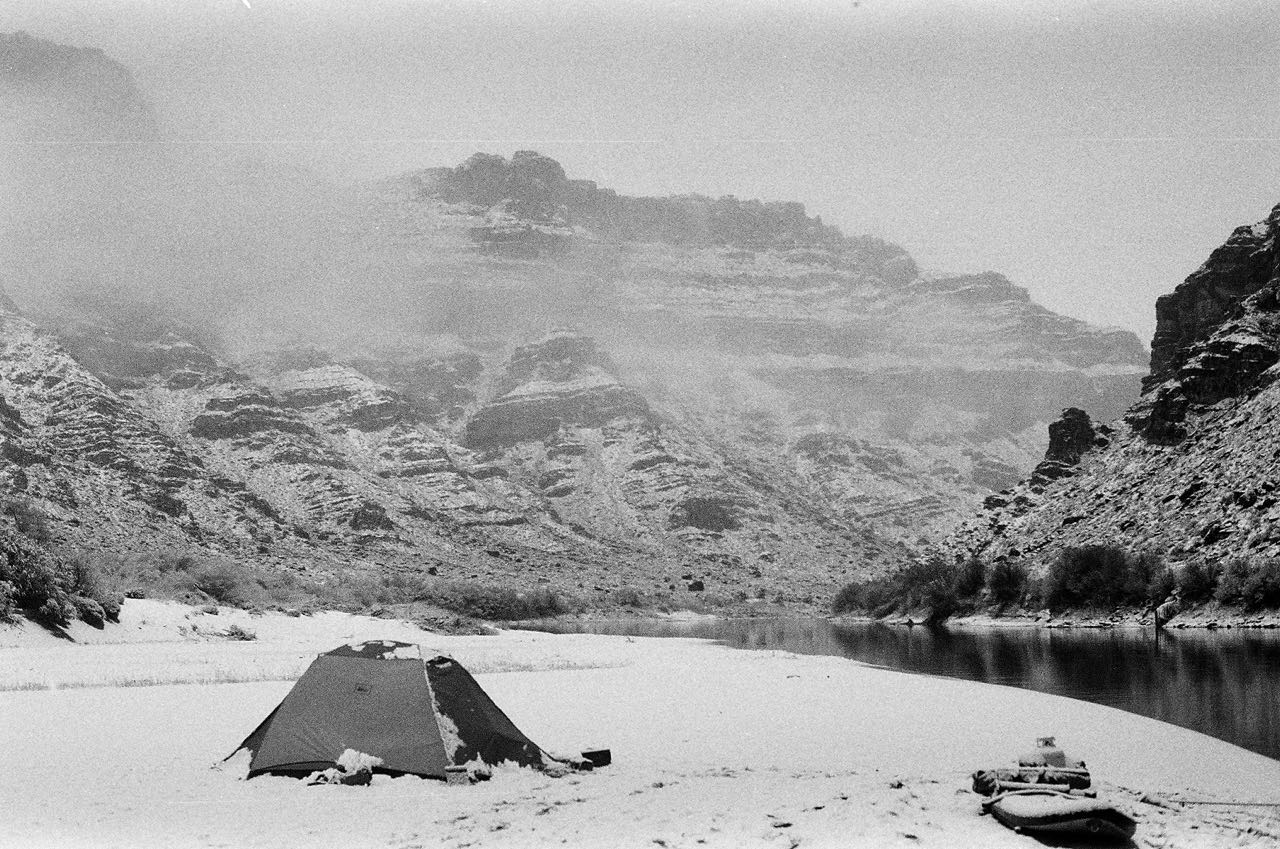 Temperatures never got above the high 30s, and I’m pretty certain this section would have been impossible without the company of my friends. The crew that joined us on the Sand Flats made it happen. In four days, we paddled over 100 miles. We were awake at sunrise every day and paddled until it was dark, even going by headlamp at one point. For about a month, we woke up to everything being covered in ice and spentt an hour each day thawing water jugs, tent flies and dry boxes. By the time we reached the confluence with the Colorado, our team was down to four: me, Bobby, Bridget, and Alex. The morning we were set to run all 25+ rapids in Cataract Canyon, we woke up to inches of snow on the ground. It was a full on blizzard. Lake Powell ended up being a lot more fun and scenic than we expected, though, and we arrived to Page, Ariz., a day early. We enjoyed an extended layover with our families who came from New Hampshire, Wisconsin, Texas and Utah to spend time with us. It was the perfect morale boost before heading into the Grand Canyon.

Hundreds of thousands, if not millions, of people have attempted to write about, photograph or film the Grand Canyon to communicate its beauty and inspiration. I won’t to try to do that. But I’ll say that the Grand Canyon section of our trip was one of the most difficult for me. It was also the most fun. I had spent nearly 18 months thinking about what it would be like to swim through these rapids, and in the end, it proved to be perfectly safe and manageable for me. But this was also the section where I felt the most vulnerable. I swam probably five times a day. Before every rapid, I’d look to a friend, usually Bobby, Bridget, or Preston, and make sure that they had my back. The answer was always yes. Evenings were spent revelling in once-in-a-lifetime moments while gazing at the grandeur of a landscape more amazing than anything I could create in my dreams. 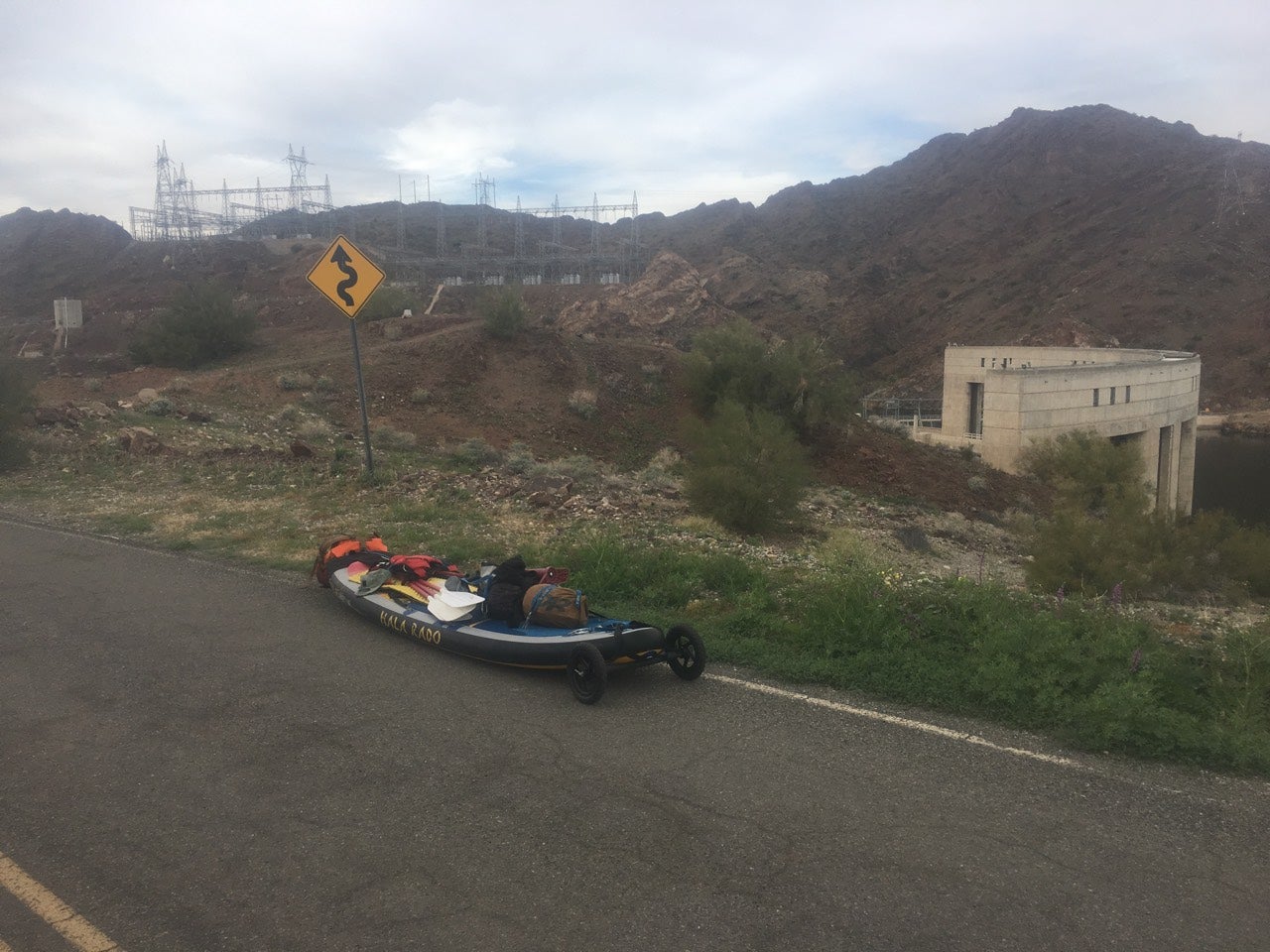 For a lot of river runners, everything after the Grand Canyon is often written off as being unnecessary to explore. I’d heard it lacked scenery and good camping, and that there was too much flatwater. This wasn’t the case. It also helped that it was finally warm enough to enjoy being outside. The hot springs in the Black Canyon were a major highlight and the scenery throughout was impressive. However, this section is by far the most developed part of the whole river basin. Casinos, RV parks and multi-million dollar homes dot the landscape for many miles. But so do steep canyon walls, prime wildlife habitat, green marshes and interesting rock formations. We were blessed with a tail wind for over a week and made great time paddling a section of river that was entirely new to all of us. Bobby’s parents, Faye and Joe, assisted with a few portages and were a tremendous help with logistical support and positive energy. We stopped at a handful of riverside restaurants, chatted with friendly locals and soaked up the sun in the warmest weather of the whole trip. Getting to the Mexican border was a huge milestone and we were thrilled.

After taking some days off in Yuma to recharge and route plan, we crossed the border in Los Algodones and walked over to a canal. We were all a little on edge, but knew we had to get on the water again. And as we did, it seemed like the whole country was cheering us on. Families would run out of their homes to say hello, offer us oranges and film our float trip. Three days and 27 portages later, the river had transformed and been allocated to so many different farms that the water literally ended. Unlike long-distance hiking trails or a mountain climb, there isn’t a predetermined finish point or summit anymore. 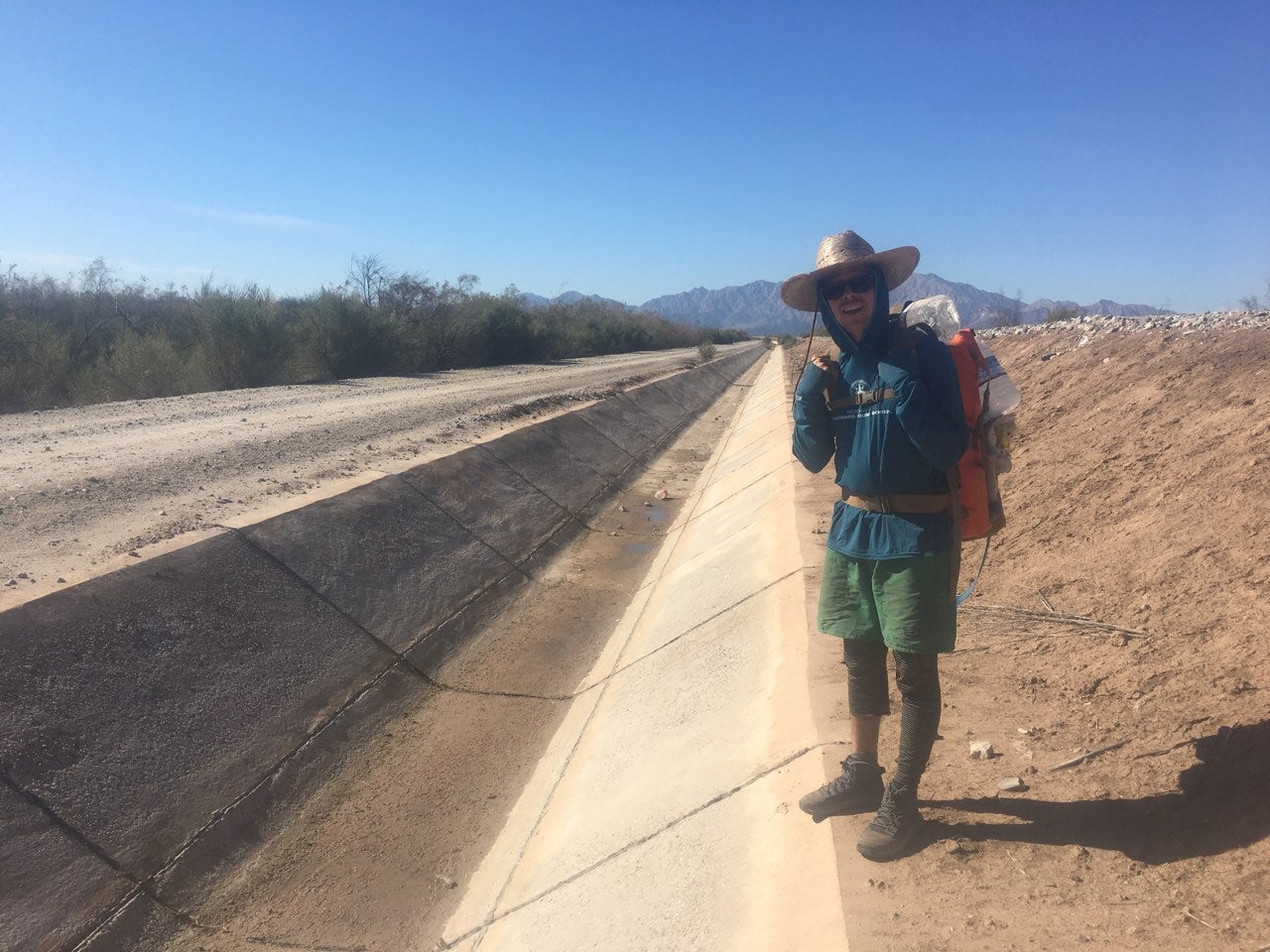 The hiking was a struggle, though only for two days. When the sun was setting and we realized we didn’t have enough water, a local hunting guide drove by and offered us sandwiches, bottled water and soda. Pablo was truly an angel. We eventually reached the ocean and felt an enormous sense of surprise. Our bank accounts were empty and our bodies were aching, but our hearts were full and our minds were filled with inspiration. The journey was over.

It’s been a tough adjustment back to living off the river. Right off the bat, I felt overstimulated and oversocialized. But I’ve learned something important. I know that one of the best ways to judge an individual is how willing that person is to ask for help. From Wyoming to Mexico, the river taught me that the most important things in my life are the relationships I have with those around me. Our community lifts us up and makes us better people, but we need to be willing to accept that love. The gratitude I have for the places and people around me only grows everyday.