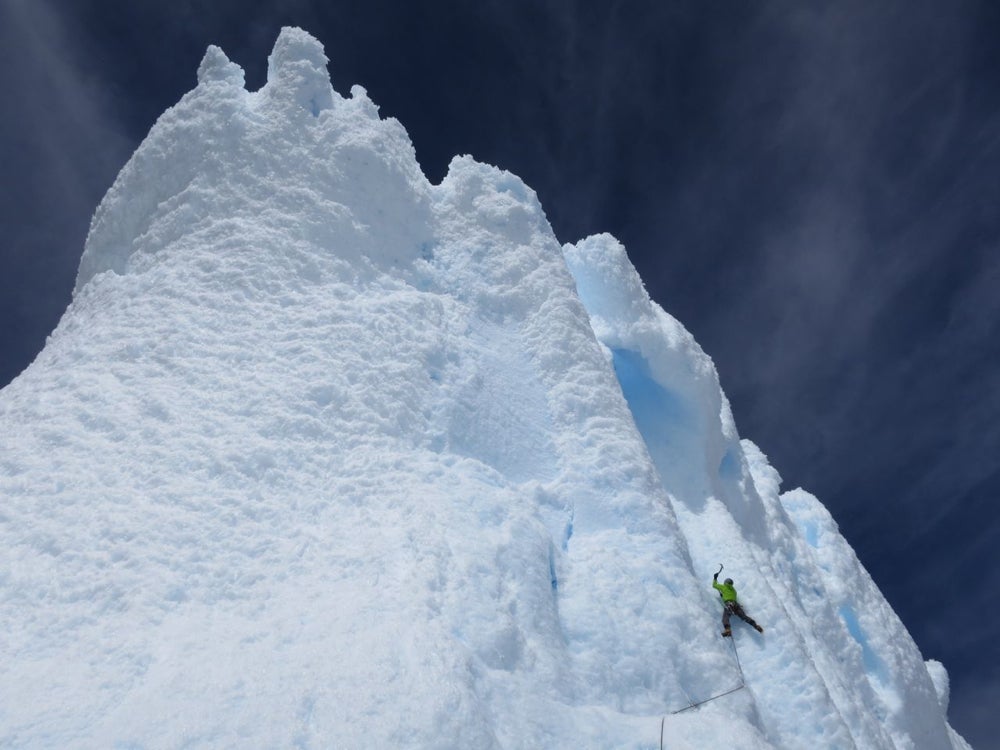 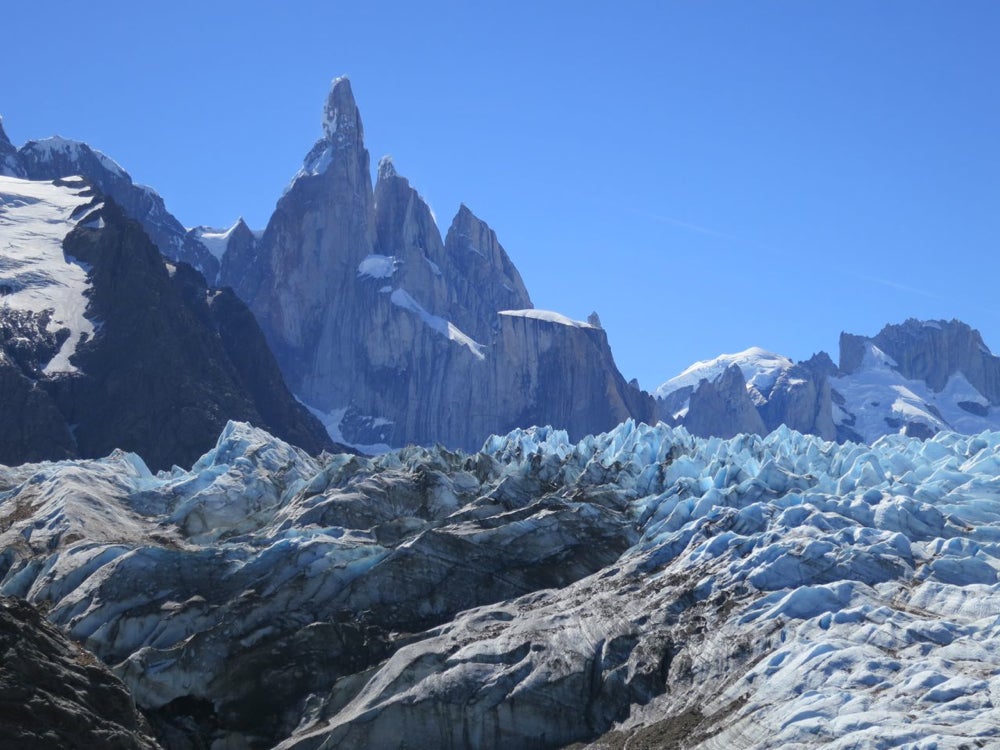 The peaks of Patagonian Argentina stick up like teeth on the jawbone of some great, ancient fossilized animal. But the Patagonian weather is so bad, you may not get a weather window long enough to climb a peak of significance. And even if a weather window opens, every other factor must be taken into account for a successful ascent. After turning around twice on the Southeast Ridge of Cerro Torre, I finally found a winning combination to log the first “fair means” ascent of the Corkscrew Link-Up, without using the bolts on Cesare Maestri’s Compressor Route.

If at first you don’t succeed I arrived at El Chalten on New Year’s Eve, planning to climb with my friend Jens Holsten. With a four-day weather window, we attempted to repeat the Southeast Ridge of Cerro Torre, planning to finish on the David Lama or Hayden-Kennedy Route. But by the time we reached the top of the fifteenth pitch above the Col of Patience, we realized our strategy had many flaws and descended to rethink our strategy.

For our second attempt we prepared more efficiently, but by 1 p.m., the sun was so intense that the summit mushrooms and mushrooms on the ice towers were dropping huge pieces of ice down the route. At one point, a mushroom weighing a couple of tons landed on the spot where Jens and I had been minutes earlier. We were forced to rappel back to the Col to pick up our stashed gear and call it a day. Sadly, Jens was then to return to the United States.

Hatching a new plan.  With the knowledge and experience gained from the first two attempts, Colin Haley and I began planning an attempt of the Southeast Ridge to the Ragni Route on Cerro Torre, a route called the “Corkscrew” route.

A Norwegian team had just attempted the route, but had to turn back when one of them was hit in the face by a piece of falling ice. The Corkscrew had not seen a second ascent yet. Furthermore, the Norwegian first ascent party Ole Lied and Trym Atle Saeland had used the Maestri bolts next to the Salvaterra A1 crack, as it was filled with ice and covered with snow at the time. Colin and I would try the Corkscrew route by “fair means.”

That’s not light and fast — this is light and fast  On Tuesday, January 23, Colin and I went over our equipment and talked about the weather forecast. We had three days of good weather left. Colin, who has been climbing in the Patagonian mountains for the past 10 years, used an electric scale to meticulously weigh every piece of equipment. My water bottles were exchanged for lighter-weight soft Nalgene bottles, every pack and clothing option was pared down and selected for maximum value and appropriate weight for the forecast temperatures. Even carabiners were weighed and exchanged for newer, lighter models. My idea of light and fast in Patagonia took on a new significance.

On Wednesday, we headed up the trail toward the Torre Valley. At Niponino we packed our climbing packs, and again, the rack was pared down even further before we continued up to Norwegos Camp for dinner and a night’s sleep.

When we headed up the glacier, Colin had a new variation up a central Nunatak, bypassing the first four pitches of the approach to the Col of Patience. With the route so melted out now, this was the safest line of approach. We were able to solo most of the approach and only had to belay three pitches up to the col, versus 12 pitches Jens and I had belayed before. We arrived at the Col of Patience in six hours with heavy packs.

To the summit. Colin fixed the first rock pitch and we set up our tent in a bergschrund, sheltered from the wind. We woke up at 12:30 a.m., broke camp and cached our excess sleeping gear. We would go for a non-stop push to the summit and back without bivy gear. We started up the first rope at 2:30 a.m., Colin leading the rock pitches. We made it up the 17 pitches to the traverse across the ice field of the upper South Face of Cerro Torre.

Colin led the first simul-climbing pitch. We had eight screws and agreed to keep at least two between us at all times. After the first pitch, I led out across the traverse and crossed ice up to 85 degrees before reaching a mixed rock and ice section that I had to downclimb. Colin belayed me up an easy ice runnel to the start of the mixed climbing section at the start of the Ragni Route. I led my block through the mixed and ice pitches. We ran into two other parties on the West Face and exchanged hellos before I led through the headwall and up into the mushroom ice pitches.

The sun was directly on the mushroom ice in the afternoon, and I waded through slush to the base of the final headwall pitch, which was melting in the afternoon sun. Halfway up the pitch, Colin called down that the ice was still in good shape. I jumared up the pitch with both packs and arrived at the summit near 5:30 p.m., after 15 hours. As we celebrated, we knew that we had a long way to go before we were safely back to Norwegos.

As I prepared to head down behind Colin, the Slovenian team, Luca and Todaj, topped out. I snapped a photo with Todaj on the top. They had just climbed the second ascent of the Southeast Ridge via the David Lama variation. We all rappelled the headwall and made our way through the night back to the Col of Patience, arriving just before 2 a.m. less than 24 hours roundtrip from the Col.

The Slovenians brewed up and went to sleep on our tent platform while Colin and I made a few liters of Tang and began our rappels just before first light. I led the rappels down to the glacier and crossed the bergshrund just before the sun hit at 8:45 a.m. We waded down the soft glacier back to Norwegos Camp where we packed our packs and descended to Niponino for a two-hour nap at 2 p.m. We awoke refreshed and ready for the six-hour hike back to town.

The significance of the ascent seems to pale compared to the learning experience of the three cumulative climbs. The summit was just the icing on the cake. Jens and I progressed as partners and improved our climbing techniques through repetitive efforts. We managed to reduce our weight and improve our ascent strategy. From Colin I learned the technique of the scale and reduced our fast-and-light approach down to the gram. What a wonderful journey! Alpine climbing is such an enriching lifestyle and a truly transforming passion.