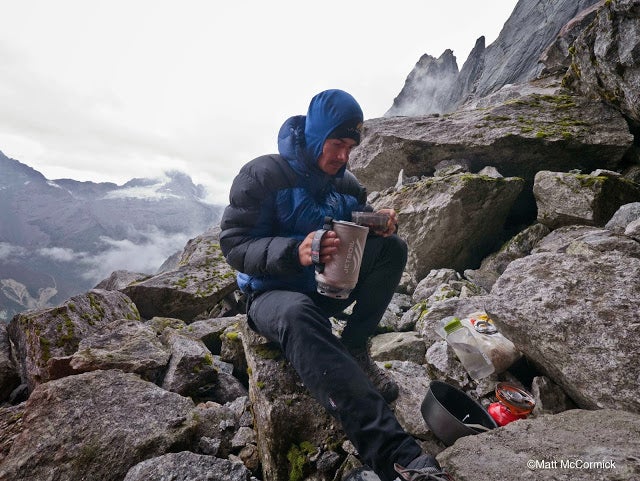 From inside our cook tent, the droning sound amplifies, an invisible missile, its target unknown. I rush to stick my head outside the window of the tent just in time to witness this granite missile culminate in a horrifying impact of stone on stone complete with a 30-foot cloud of rock dust. From our camp, tucked between coarse boulders below the west face of Seerdengpu, I watch as the dust cloud recedes from the midst of the first pitch of our intended line up the northwest buttress. Yesterday in an acclimatization foray on the same line, we had nearly been struck twice with similar rockfall. A contemplative silence looms over the camp. It’s time to change plans. Again.

This wouldn’t be the first time our plan had changed this season or doubt about our objectives had filled my head. The whole year we had planned, trained and prepared for a trip to the Trango Valley to attempt a new line on Uli Biaho. Then in April I was diagnosed with an inguinal hernia and had surgery to repair it. For the next several weeks I could barely put on my own socks, let alone prepare for an expedition to the Karakorum. With time I healed, though, and as mid June arrived I was feeling stronger and more confident with each day. Then the unthinkable happened in Pakistan. On the evening of June 22, 2013, a group of Taliban walked into the Diamar basecamp below Nanga Parbat and killed 12 climbers. This horrible incident rocked the community of climbers who had been to Pakistan and had experienced nothing but warmth and hospitality. For me, it was exactly what I had always told my friends and family wouldn’t happen. “It’s not like the Taliban are going to hike for days into your basecamp,” I would say.

The attack at Nanga Parbat scared me, but more importantly, it terrified my family. My family had always been 100 percent supportive of my climbing. And now, despite how subtly they might express their opinions, the vibe just didn’t feel right. We quickly pulled together a plan B to travel to the Siguniang National Park in China. The west face of Seerdengpu was an appealing objective and Pat had already been to the area twice. Tickets were bought and by August we were on a plane to China.

As I watched the frighteningly large dust plume fade into the afternoon light, I felt our psyche for tomorrow’s planned attempt begin to wane. Were we over-reacting? We couldn’t really tell where the rockfall was coming from. Would we be reasonably safe if we moved fast in the early morning when there seemed to be less rockfall? Our chosen line followed several amazing splitters in perfect granite to more questionable terrain up high. Would the lack of snow and ice create dangerously loose ledge systems up high? The questions cycled through my head. As we considered other, less threatened lines, it struck us both as ironic that we had bailed on our Pakistan plans only to attempt an objective that seemed much likelier to kill us with rockfall than our chances of encountering the Taliban would have been in Pakistan.

The rest of the trip was wrought with unsettled weather and just plain bad luck. One day we climbed 1,600 feet up through a mix of crystal-laced cracks and run-out 5.10 slab climbing only to be hammered that night by a lightening storm that was the first of 12 straight days and nights of rain. We descended to a guesthouse in the valley below, passing the time helping the family there harvest potatoes and occasionally getting in some bouldering between rain storms.

Despite continued snow and rain, we returned to basecamp as much for a change of scenery than anything else. As we dug out the tents from under heavy, wet snow, we discovered that we had had a visitor. An unknown creature had chewed through the mesh vent on our single-wall tent and stolen all seven pairs of socks we had left in the tent. Amazingly, the now well-insulated creature had not been interested in anything else. Now with three increasingly smelly socks between the two of us, we considered our options. When the weather finally cleared, we found our previous line looking more like a black diamond ski run than the rock buttress we had previously tried. One final attempt on yet a third line on the face ended before it really started with Pat throwing up as an apparent result of food poisoning. Shortly afterward, we broke down our camp for the last time, descending into the valley bearing crushing loads.

Failure in my climbing is not a new experience. I’ve found that as my skills and passion have grown and I push myself harder in each aspect of this sport, I fail more than I succeed. I know this means that I’m trying as hard as I can, unsatisfied with having it any other way. This time, though, conditions, health and just plain bad luck prevented us from ever really getting a chance to fail. No chance of a fair retreat, knowing that we’d given it everything we had.

Now, home in Vermont, I look up from my computer screen to the heart of the Green Mountains sprawled out before me in an orange, yellow and red technicolor. I must admit that the failure has gnawed at me since returning home. Questions ripple near the surface of my conscious mind: “Is it all worth it?” “If we had done this or that maybe we would have sent…” I know better than to be sucked in by these thoughts, but nonetheless they are there. I know that each experience, successful or not, offers lessons learned and experiences not otherwise had. People say not to stress the summit, to “appreciate the journey,” or something about each failure furthering personal growth. I know these things to be true, but I’ve found it hard to swallow this time.

Despite all the factors that can conspire against me, I know I’ll return to the mountains. I’ve come to love the process of expeditions, the intense excitement and drive leading up to departure as I push myself harder in the weight room, the jaw dropping grandeur of seeing the objective in-person for the first time, the nervous excitement that keeps me awake the night before an attempt. As the days pass since returning from China, my thoughts slowly shift from any frustrations about the trip to thoughts and ideas for the next adventure that I can’t wait to begin.

I’d like to sincerely thank the American Alpine Club’s Lyman-Spitzer Award committee for their support of our expedition despite our last minute change in destination.