Why YOU Should Climb At Rifle 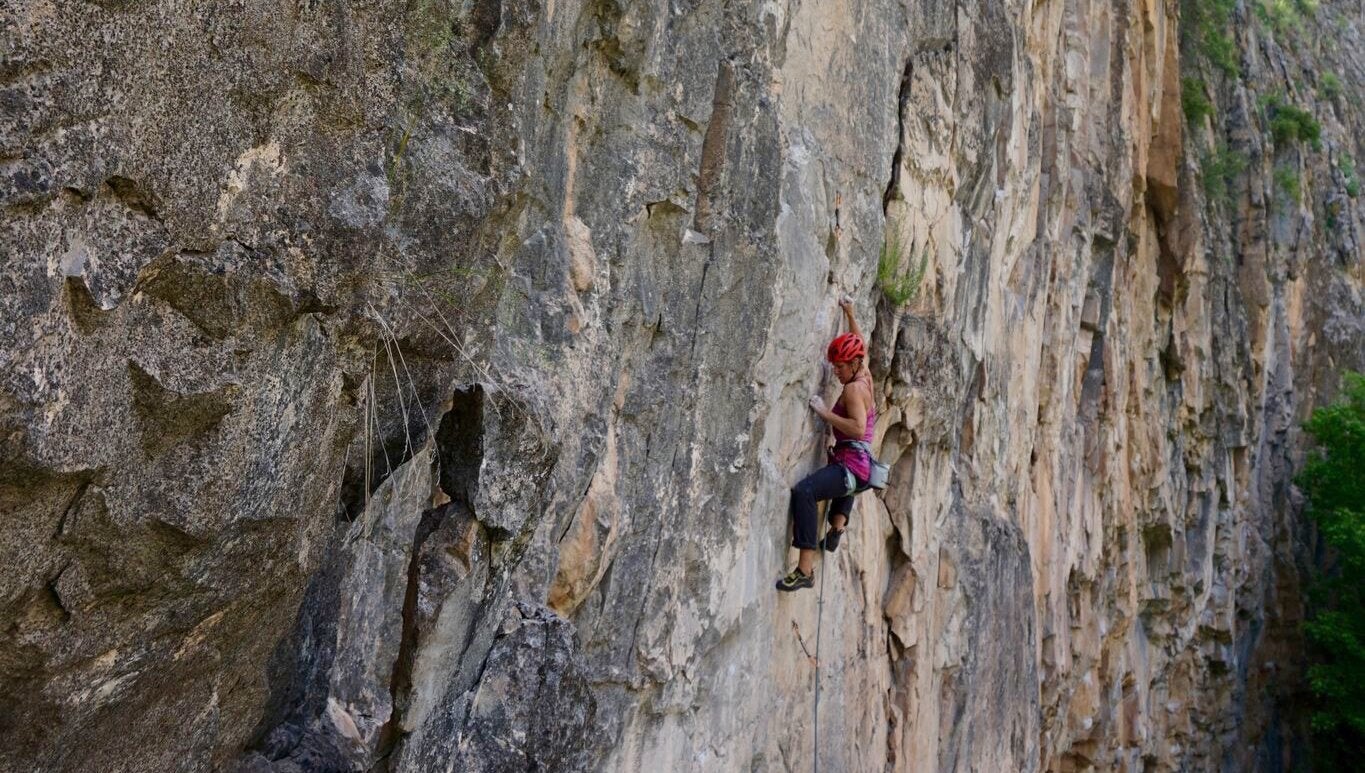 Not having been in a mass casualty accident, a war zone, or a Justin Timberlake concert, I was not accustomed to hearing the shrieks, cries, screams and growls that echo throughout Rifle Mountain Park. The venue is so very steep and the climbers are working so very hard that they can’t help but whelp with joy, pain and anguish as they work their way through difficult projects. I’ve spent days and days in Rifle Canyon this summer at the behest of my frientor(friend and mentor), Dawn Glanc. She dragged me—her 5.9+ partner—out to play with the big kids—her 5.12+ friends—this summer, and now I’m climbing two grades harder than before, and have had 200 percent more fun than I have my previous seasons. So why on Earth would a newer, less-sendy climber want to enter this proverbial lion’s den? What could we possibly get out of this fabled canyon?

You get to climb with hard climbers.
People aren’t born with some magical gift of rock-climbing talent. The climbers who are crushing 5.12 just love climbing. Yeah, sure, they’re athletic and skinny and physically able. But climbers like Dawn just love climbing, so they do it all the time and they get good at it. I read some Malcome Gladwell piece in the New Yorker (because I am fancy) on “talent” and how we shouldn't think of it as an inherent trait, but more of a skill developed from love/passion/obsession with something. I say all this to encourage people to climb in hard places because that is where you are going to find the people who love climbing.

You’ll find climbs at every grade.
There are spots where you can project your 5.10 next to your partner’s 5.12. There are even spots to work on your 5.7 next to your new friend’s 5.13.

You’ll find partners soooo easily.
No one cares how hard you climb. Seriously. If you are a patient belayer, give a good catch, and bring awesome snacks, you fit in with any crowd. And the passionate climbers in Rifle have worn out their friends and lovers with their climbing projects, so they will be so very happy to see a fresh face who isn’t sick of catching them over and over and over. Plus, hard projects require long rest periods between attempts, so they have plenty of time on their hands to return the belay favor.

You’ll have dozens of rope guns at your beck and call.
It is called Rifle for a reason. It is, if you are climbing in the middle of a Texan secessionist’s stockpile. You’ll have access to all sorts of artillery. Want to work your way into 5.10 climbing? Ask your neighbor to put up the rope for you. Dawn needs a warm up anyway, so I am actually doing her a favor. (You are welcome, Glanc).

You’ll be forced to focus on process, rather than outcome.
Over the past years, I’d become so obsessed with wanting to be a better climber that I’d be emotionally crushed when I “failed” to finish a climb. But Dawn, and the other send-bots in this canyon, approach every single climb as a project. She is never attached to outcome. We’ll walk up to things and she’ll say, “Why don’t you work on this one?” Because that is what we are all here to do, figure it out and put it together. There aren’t any gimmes, so you have to coach yourself, and your partners, to roll with it.

You’ll realize climbing is hard for everybody.
What a place to watch struggle and heartache and fear and commitment! It is the same mental and physical push at 5.8 as 5.11 as 5.13, and everyone here gets it. People watch you battle on your 5.10 and are psyched for you because their climb is just as hard for them. They’re on a different climb, but on the same physical and mental playing field.

You get to fall!
The steeper the climbing, the safer the falls, so the easier it can be to push yourself. Yes, a Rifle 5.11 is intimidating and perhaps un-top-outable, but it isn’t scary the way a run-out Red Rocks 5.7 can be. There is some something deeply, deeply unjust in the learning process of climbing where the falls are significantly more dangerous at the easier grades. Rifle corrects that injustice.