A New Kind Of Brave 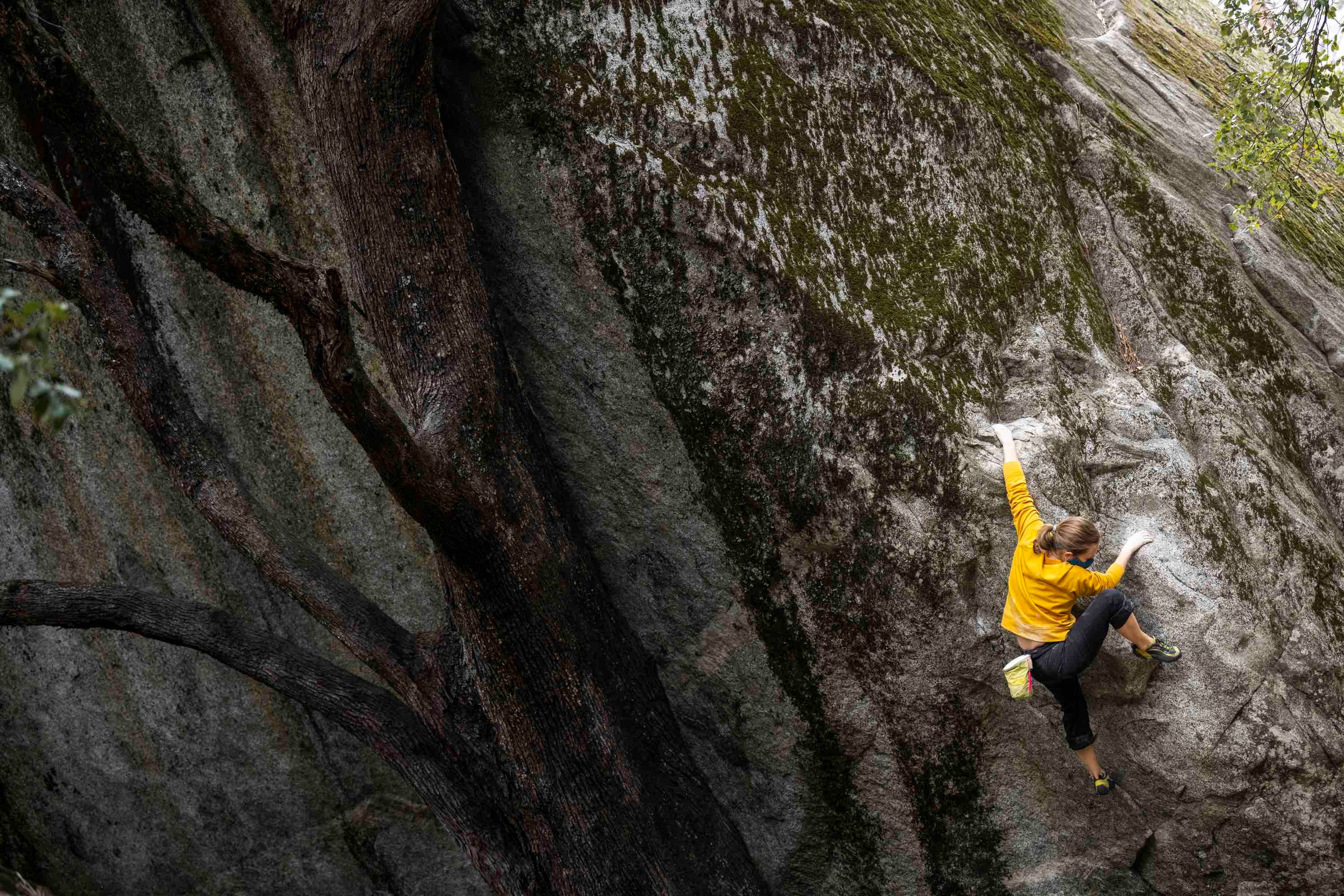 “I’m just going to keep posting these until it becomes normal instead of brave,” Beth Rodden writes in her Instagram caption.

The photo: A mid-workout selfie in front of her home climbing wall. In shorts and a black sports bra, she pauses between planks to snap the shot, her cheeks rosy, her eyes smiling.

The caption continues: “Hoping this picture translates into ‘local mom drags out extra sets of planks to avoid more virtual schooling duties,’ instead of ‘climber goes against community norms and bares soft stomach.’ ”

Judging from the thousands of Instagram “likes” and effusive comments to the photo, baring that soft stomach still tips the scale toward ‘brave’ and ‘going against community norms.’

For Beth—one of the hardest climbers of a generation—"brave" has taken on a whole new meaning.

Heading to the boulders near her home in Yosemite these days,

With school closed this year, bouldering almost always means bringing along her son, Theo. Birds sing and a dump truck crash-bangs nearby as they set up their crashpads on a typical day. Above them tower the iconic walls Beth built her career on.

“You meet her, and you’d never know,” says alpinist and author Kelly Cordes.

Beth did the first ascent of one of the hardest trad climbing routes in the world. And that’s just one of many mind-boggling accomplishments.

“Beth has always been at the fore of rock climbing,” Cordes says. “She was a leader before she even knew it, climbing routes beyond most of our imaginations.”

“She was part of that group of women who proved that climbing at a high level is not restricted to men.”

In her early 20s, Beth’s voracious drive led her to Yosemite, where she and Caldwell did the first free ascent of Lurking Fear on El Cap and a slew of other boundary-pushing climbs.

It was the beginning of the free climbing golden age on El Cap.

Beth was sleeping in the trunk of her two-door Honda Civic, camping illegally in the lodge parking lot, eating a pint of Ben and Jerry's after climbing each day, and swimming in the Merced with a now-iconic cast of Yosemite characters.

On a climbing expedition in Kyrgyzstan in 2000, Beth and her team were kidnapped and held hostage, only managing to escape by pushing a captor over a cliff.

The violence lingered with Beth as she plunged back into climbing back home in the U.S. She ignored her trauma while ticking off harder and harder ascents even as her relationship with her partner—and eventually her husband—Tommy Caldwell became increasingly strained.

In 2008 Beth poured herself into her biggest project yet: the first ascent of Meltdown. The most difficult pitch of trad climbing in America, possibly the world (5.14c).

The route held everything Beth loved about climbing—it was also a breaking point.

“I wonder if I could have enjoyed it more if I hadn't put too much pressure on myself,” she says.

“Or if one of the reasons I was able to do it was because of the pressure and how obsessed I was with how I approached projecting.”

She sent the route—an incredibly difficult single pitch next to a waterfall in Yosemite—and her body collapsed into injury and her marriage into disarray.

Not for lack of tries.

“Early in my climbing career, being afraid was something to be laughed at,” Beth says.

She always felt like she had to “just suck it up,” she says. But that never felt good or empowering.

In the wake of her kidnapping, high-profile divorce and relentless injuries, Beth took a hard look at her identity as a climber.

She learned that, opposite to what she’d been taught as a young climber:

Applying this idea to climbing was difficult in the beginning, she says. “But I love it so much now.”

“When I first came on the scene, self-promotion or over-promotion was completely taboo and you were chastised if you did either by the previous generation,” Beth says.

In other words, social media sharing would have been a no-no.

Beth embodies that ethos of humility to a fault, constantly downplaying her historic accomplishments.

But over the years she’s learned another important lesson:

Some topics should not be left in the dark.

It started when she became pregnant. Beth could find almost no resources about climbing pregnant or as a mother—let alone as a professional climber. So she began interviewing other climbing moms and sharing her own story online. The response was huge.

Beth began peeling back the layers of her own experiences:

Pressure to perform or “bounce back” immediately postpartum ...

PTSD that had gone unaddressed ...

Instead of staying silent—putting up a strong front—she began to open up.

Breaking taboos, Beth shared climbing photos of her postpartum body. In an Outside story, she exposed the devastating costs of disordered eating and climbing’s send-at-all-costs culture.

“An honest and open human who has inspired an entire generation of female—and probably male, too—athletes to embrace their bodies and their identities as athletes and parents.”

In the end, it all circles back to climbing for Beth, who has been busy working to apply a newfound attitude of self-love instead of negative self talk. She recently tried a boulder problem that had shut her down back in 2003—in the midst of her groundbreaking streak of ascents.

Now a young mom and 15 pounds heavier, she worked at the problem for a few hours, and found herself standing on top.

“At some point in my life, that's the extent of the story I needed to hear:

That being thin wasn't the only path for me to climb hard,” she wrote.

But she says that’s only part of the story.

Loving to climb without external accolades and loving her body that looks different than it used to are also pieces of the puzzle.

Those pieces are the key to a lifelong love of climbing—pieces she’s now sharing with the next generation.

“To see her succeed on something because her mind is now stronger gives me confidence for my longer term projects, and to remind myself to take the long view,” says Keenan Takahashi, one of her mentees, who has been on a tear of difficult boulders lately himself.

It’s that same long view that keeps Beth going during the pandemic, as she balances family, work, a book manuscript—and managing to pack the entire kitchen for a day of bouldering.

It’s a different perspective than the one handed down to her, but seems to resonate with the next generation.

“Her greatest inspiration, for me, is that she has developed a healthy balance between climbing, family, and friendships,” Takahashi says.

“This is what I, and I imagine many of us, really strive for in the long run.”