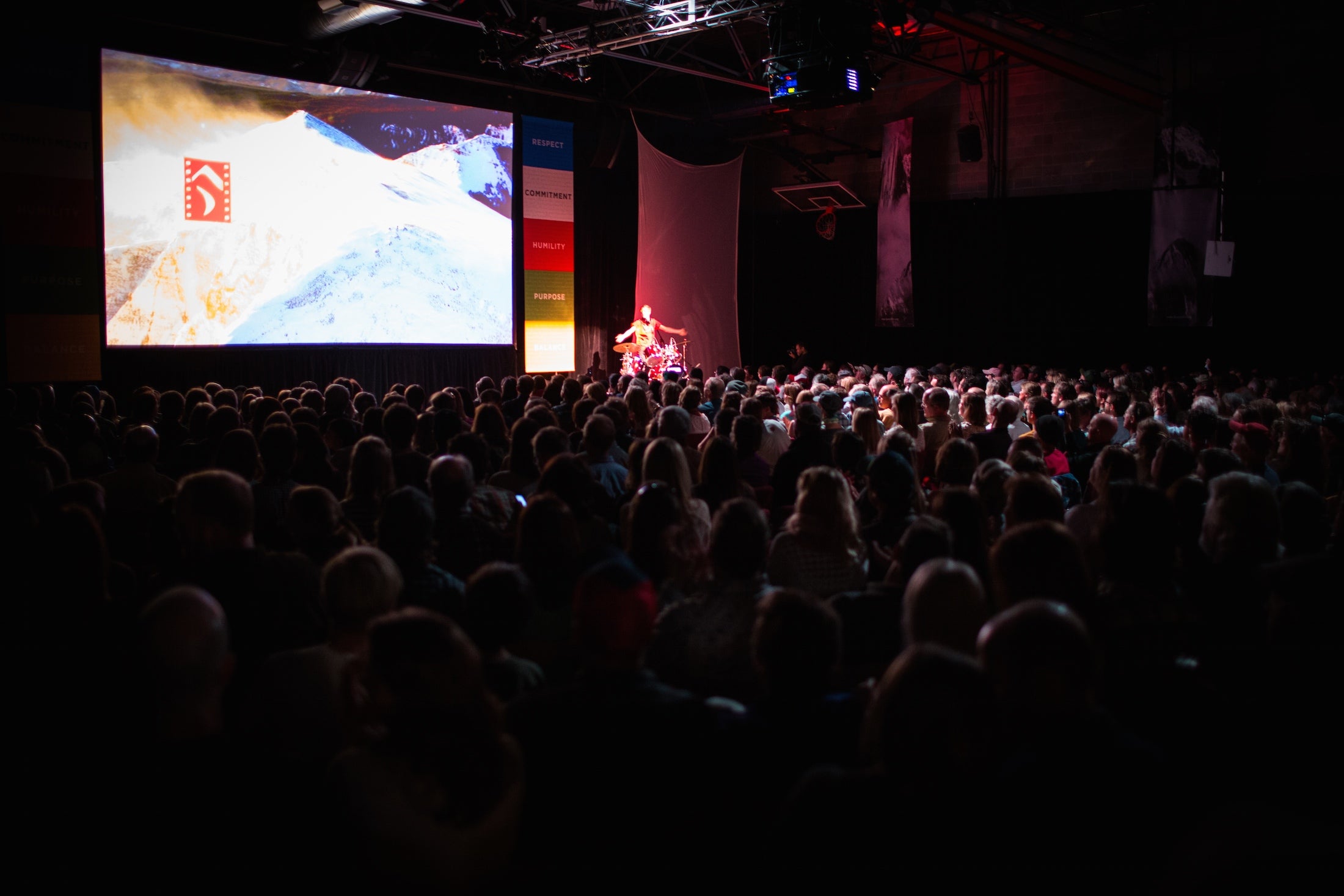 The lights faded on as the crescendo of music softened, the figure of a man with a surfboard waded in from the waves, small compared to the wide beach as the credits started to roll. And the sea of puffy-jacket-, trucker-hat-, Chacos-wearing types facing the screen exploded with a roar of applause—most of them dabbing moisture from the corners of their eyes, some wiping streams from their faces between claps. The film Denali, about photographer Ben Moon and his dog had just premiered at the 5Point Film Festival, and it had struck a chord—a deep one. Which meant 5 Point was doing what it’s supposed to, according to festival founder Julie Kennedy.

“When we choreograph a particular program, we look to take the audience on an emotional roller coaster,” Julie Kennedy says. “It’s about being super emotive, tapping the audience into every emotion they can find in three hours: pure joy, fear, sadness, humor, really getting their palms sweaty. We try to evoke all those in one program so it all comes together to create an inspiration.” And that’s part of what drew Outdoor Research to become the festival’s title sponsor this year.

"What really attracted us to 5Point was the personality, their take on film and adventure—having it be less about the extreme, pro vibe and more about the enjoyment of the outdoors with the background of sport," says Christian Folk, grassroots marketing manager for Outdoor Research. "One of the benefits of 5Point is the venue," he says. "You have everyone experiencing the same film at the same time, and there's power in numbers, with that many people, all together, experiencing whatever it is. There isn't any other conflicting programming, so what's on that one screen is what becomes the central conversation, and it's really neat to see that instead of people being split up. It's a really awesome way to experience it."

The 5Point Film Festival, in its eighth season in Carbondale, Colo., has made its reputation by featuring—and sometimes helping produce and premier—adventure films that go beyond high-intensity huck fests. The staff picks films that crack open the human element, expose the raw passions of outdoor people and take a bigger, deeper look at what it means to live adventurously. For four days in April, the Carbondale Recreation Center serves as a theater, with about 800 people together in a single room sharing an emotional and visceral ride through on-screen outdoor adventures.

“The folks at 5Point have had this incredible track record of encouraging both established and young filmmakers to take chances on content,” says Fitz Cahall, whose film The Road From Karakol won Best of Festival in 2013. “It’s provided support and a venue for experimentation, and that has had a really profound impact on the whole outdoor filmmaking community.”

For filmmakers, 5Point can feel like more like a collaborative relationship than a typical filmmaker-festival relationship, Cahall says. “I think 5 Point was also a little more willing to blur the edges on what an adventure film is and that helped breathe some life into the genre.”

The evocative programming at 5Point blossomed partly from Julie Kennedy’s experiences mothering an outdoorsy teenager. Taking her son, alpinist Hayden Kennedy, to extreme sport events when he was in high school and sensing a lack of soul in them, as well as a dearth of respect for the human body and the environment, Julie was motivated to do something that would pass deeper values to the next generation of mountain people.

When she realized a film festival was the best way for her to do that, she laid out five guiding principles to be the criteria which all films would be held up to: respect, community, humility, purpose and balance. 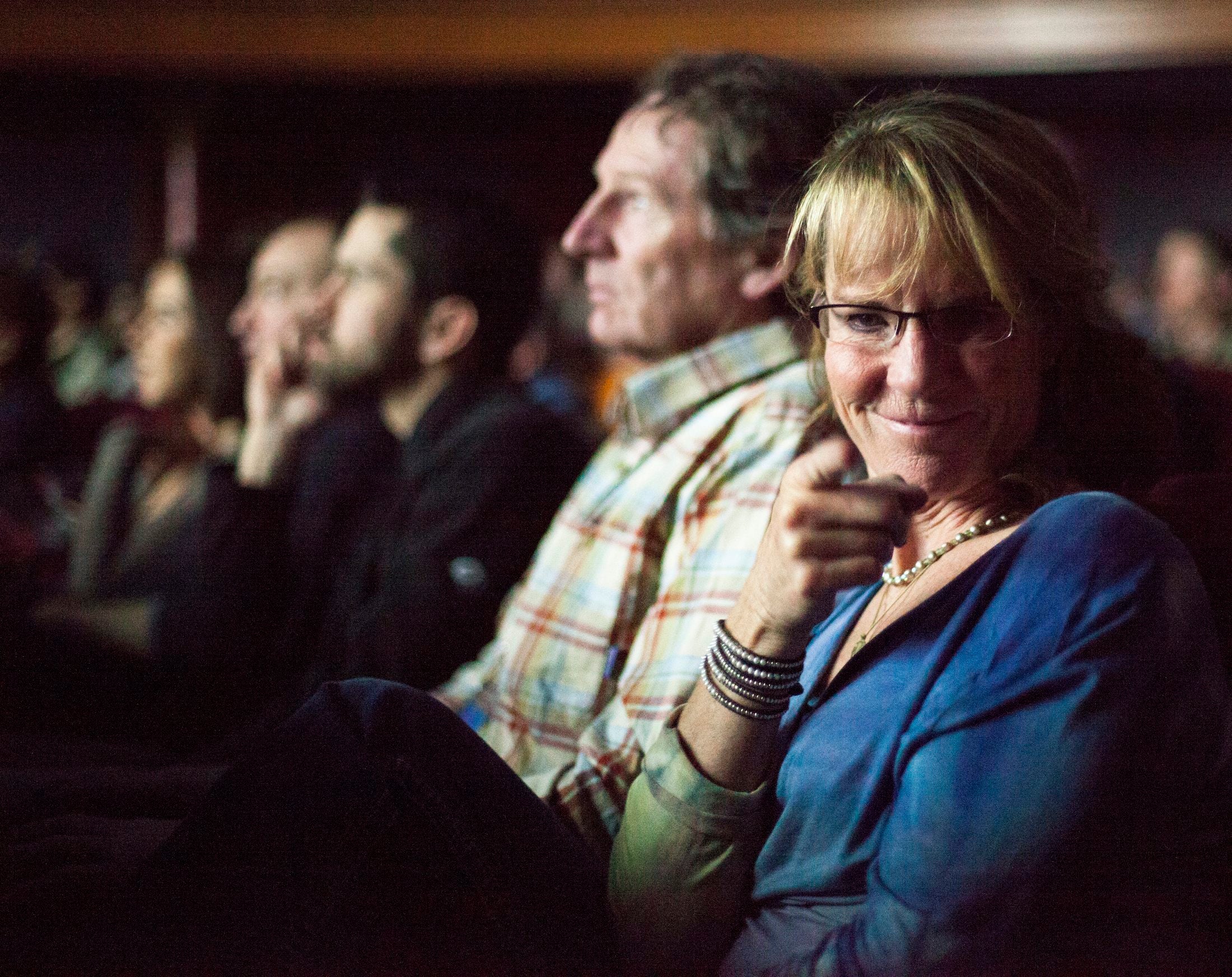 “I believe in order to do the kind of adventures we all do—skiing, climbing, kayaking, surfing, whatever—it stuck to me that those five principles have to be imbedded in our adventures, otherwise there’s no real reason to do them—because really, they’re what it’s all about.”

If you’ve had your finger on the pulse of outdoor film at all in the past few years, you’ve probably seen a film that was somehow supported by 5Point. Like Cold, directed and edited by Anson Fogel; The Wolf & The Medallion by Jeremy Collins; or 14.c about climber Kai Lightner.

“We try to spread the love to different filmmakers,” says Julie Kennedy. “And if we don’t have the money, we’ll fit them with a particular brand that might have chemistry. We like to help be the networking agent to connect the filmmaker with the appropriate brands.”

“It used to be that the film festivals were the main channel for a filmmaker to get a film out and that isn’t the case now,” Cahall says. “The filmmakers aren’t as beholden to the festivals. I think 5Point realized and decided that their mission wasn’t to be the biggest festival; they wanted to be best.  For them, it meant fewer films, more collaboration with the filmmakers. That’s enticing as a filmmaker.” 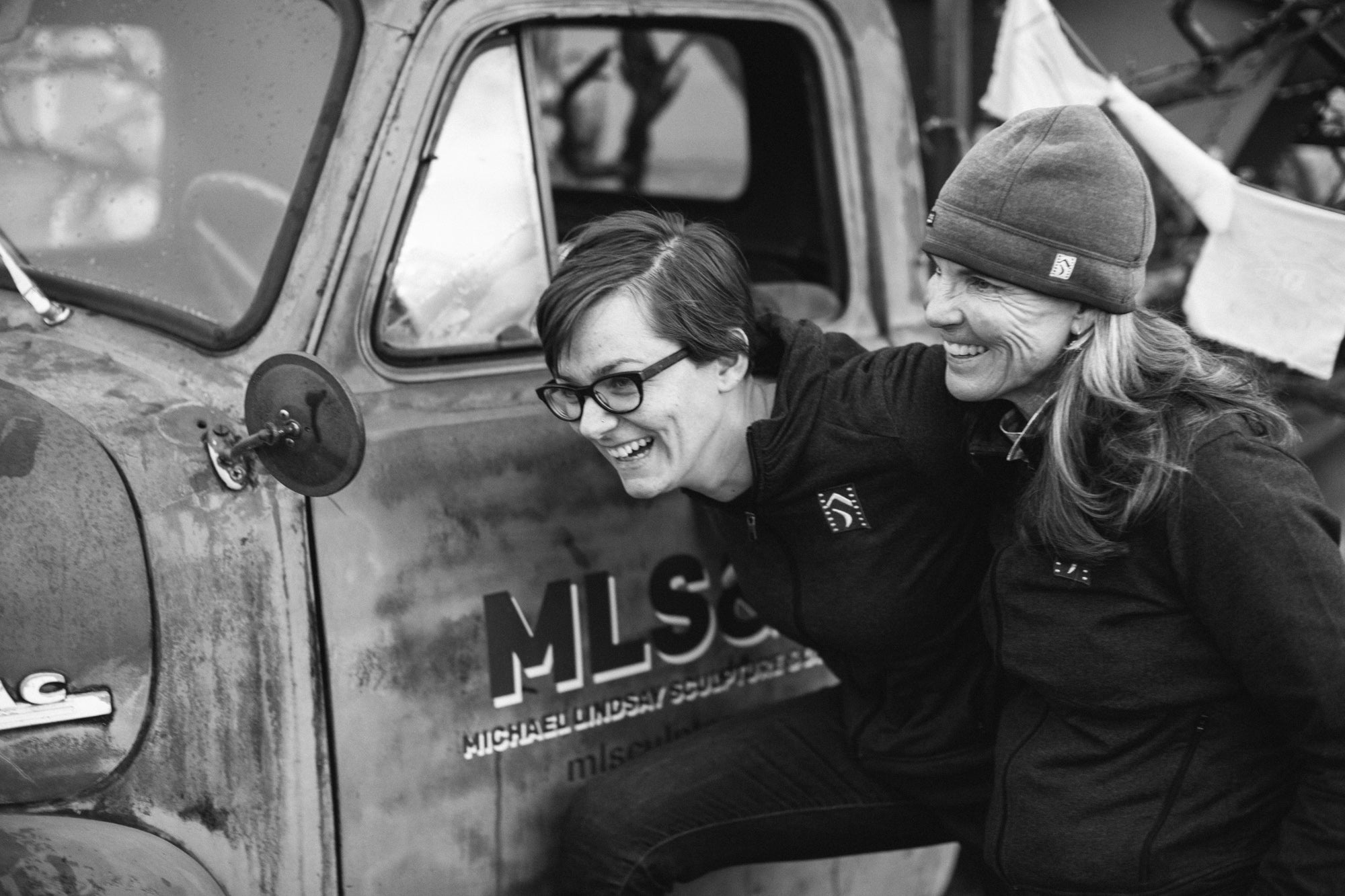 For 5Point executive director Sarah Wood, part of the motivation to work with a variety of filmmakers is to help promote diversity in the outdoor creative space. “I think there are a lot of characters in our adventure world, of all ages, backgrounds, race, gender,” she says. “I crave those stories about folks who are under the radar. I'd like to see creative storytelling and editing continue to evolve. This is a wide-open, no-holds-barred genre—and the creative side should be, too.”

Carbondale, Colorado, alongside the Roaring Fork River, at the foot of the twin-summited Mount Sopris, is a mountain town magnet for creative, motivated, talented people, some who settle there long-term, and some who descend on the valley just to soak up inspiration from the film festival each year. 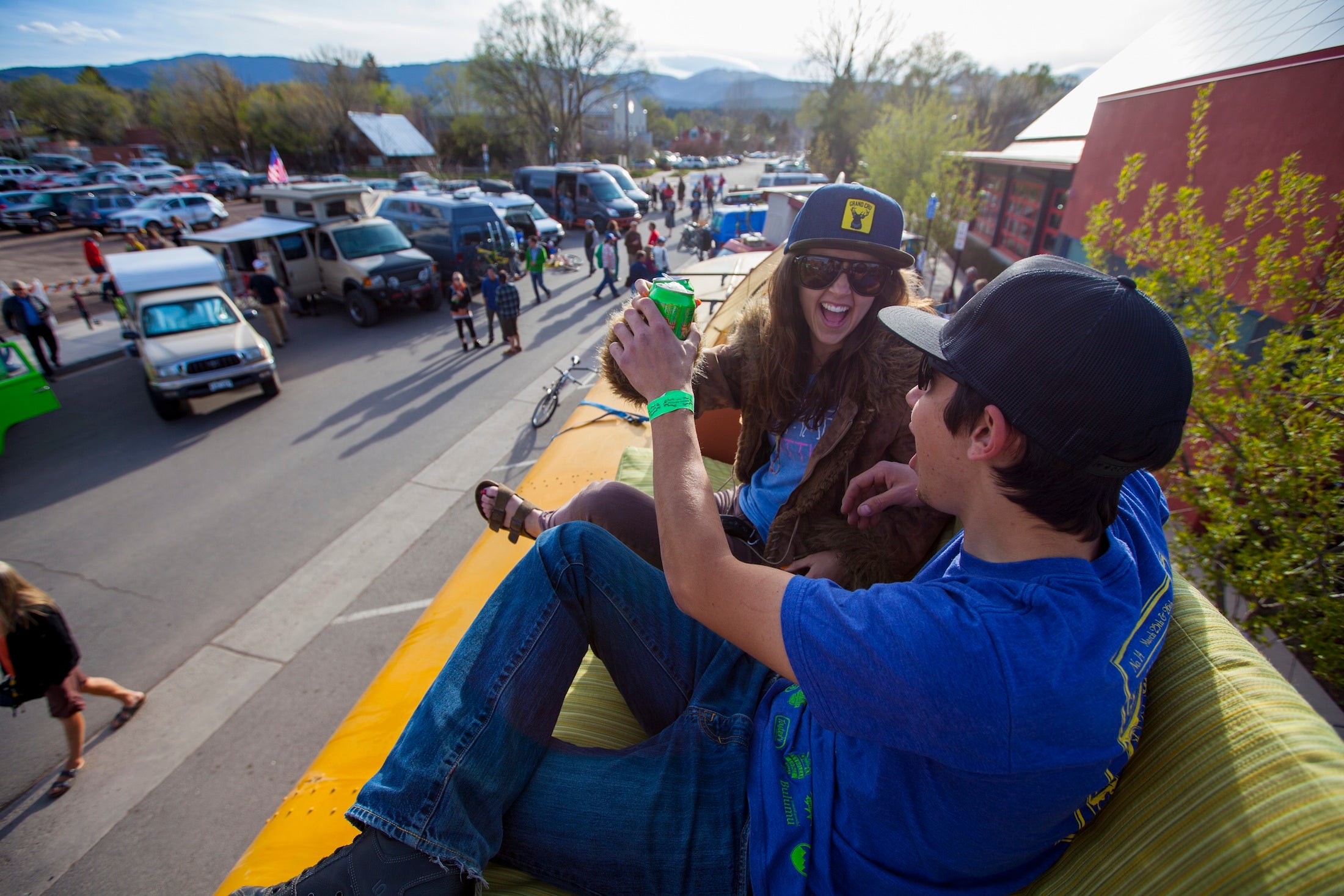 “I’ve traveled all around the world, and no place has more heart and soul and authenticity and pure joy,” Julie Kennedy says. “And I don’t see a lot of arrogance in this town. People are so genuine here. Obviously, the landscape is special, but it’s really about the people. 5Point also brings in this incredible outside community, and when we take the chemistry of our film community and writers, and adventurers, it’s like Velcro. It’s a glue that sticks.”

“Things go do down at 5 Point. They just do,” Cahall says. Beyond the film selection, 5Point hosts a Van Life Rally, showing off visitors’ live-in adventure rigs—from fancy, kitted-out Sportsmobiles and Sprinters to super-DIY truck-bed houses— and several panel discussions and live podcast recordings—like the Dirtbag Diaries and the Enormocast. And part of the charm of the whole show is its relatively small size—there’s no gambling on getting into one venue over another, and all viewers experience the same emotional roller coaster in the same room together. But when more people want in on something like 5Point, what do you do? “Take it on the road,” says Wood.

Instead of diluting the experience of 5Point in Carbondale by showing films in multiple locations or making it more difficult to get tickets, the 5Point team started producing one-night shows with an On The Road series. “This was our first attempt to bring 5Point to more audiences, since we’ve been selling out programs at the Flagship event each year,” Wood says. 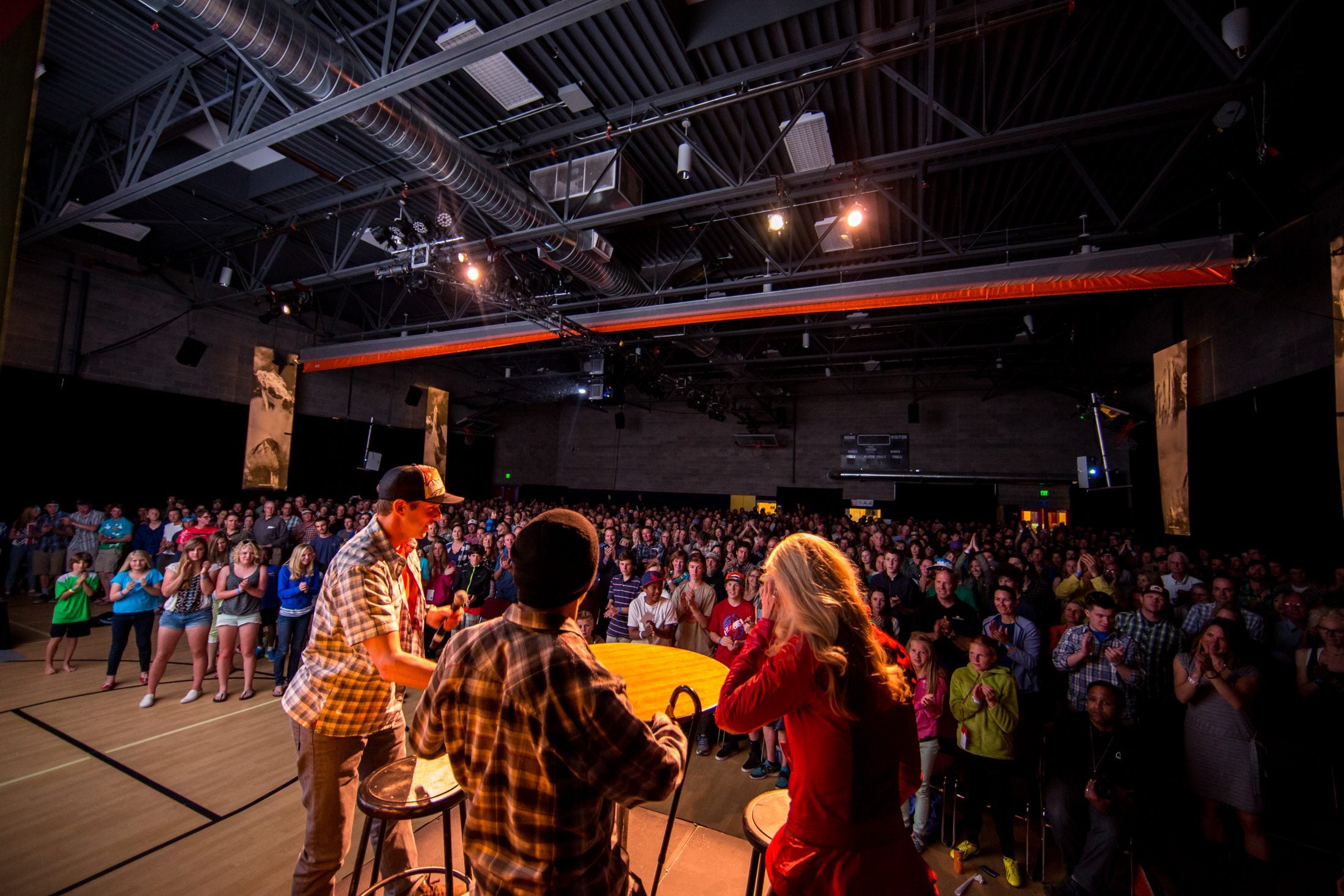 “However, with the On the Road series, we aren't able to give the full 5Point experience with guests, special side events, and the real magic of what 5Point delivers in an event,” she says. “So we decided to pick an area in each region around the U.S. and launch a new 5Point Film Festival there. Our hope is that these regional hubs grow into their own unique multi-day 5Point experiences for the regions they are celebrating, and become the kind of economic driver, and outdoor gathering that the flagship event has become over the last eight years.”

Watch for new 5Point festivals in Asheville, N.C. (Aug. 14-15), Bellingham, Wash. (Oct. 16-17), Somerville, Mass., and the Midwest over the next few months—as well as its flagship event in Carbondale in April, 2016. The upcoming Asheville festival will bring to life a unique blend of programs, plus boat demos and clinics on the French Broad River and a van life rally.