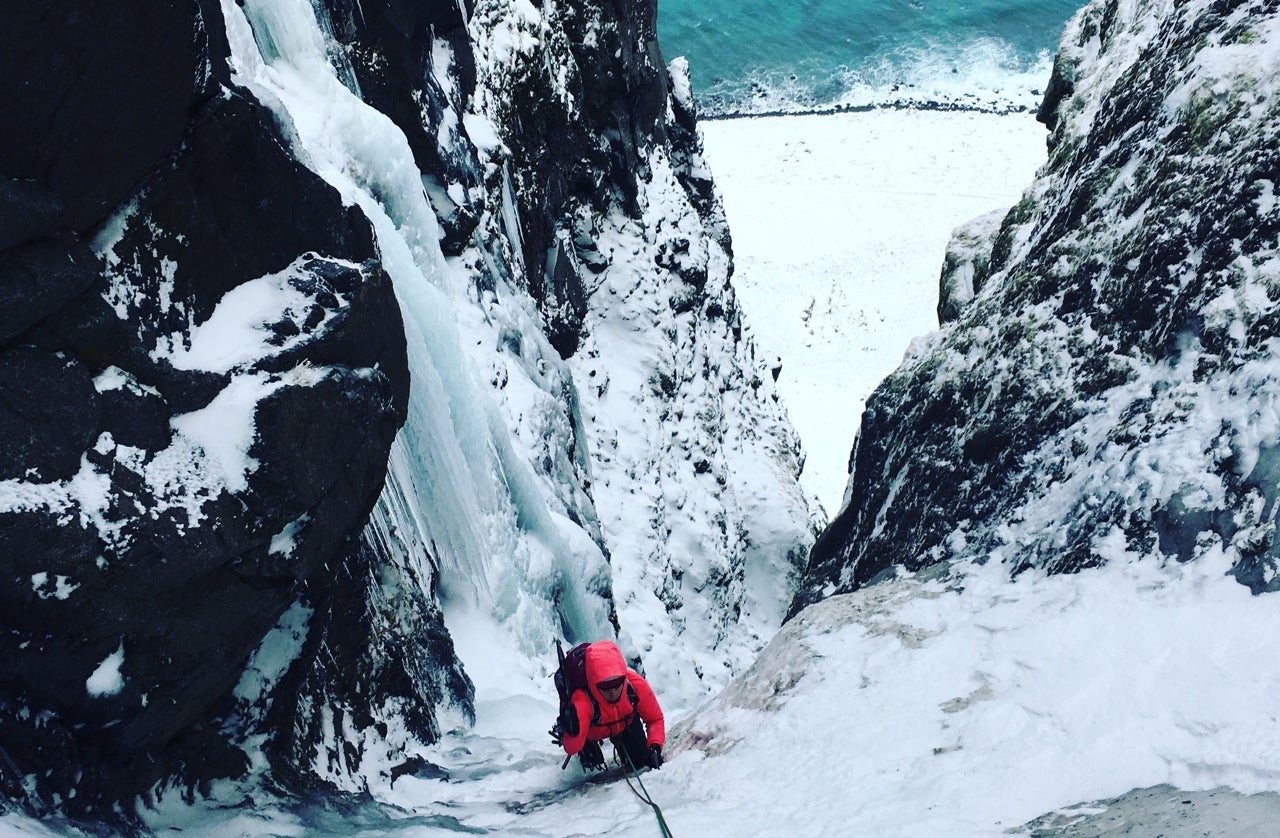 A steep talus field covered by a shallow dusting of snow, it was the most difficult approach of our trip. It was hell, actually. At the top of the hill, Dawn and I put down our packs to discuss the climb in front of us, which turned out to be nothing more than a bunch of pencil-sized icicles over wet rock. A no-go. I was bummed.

Climbing in Iceland is unique: There are no guidebooks, trailheads or maps—just photocopied pictures taken from the road years ago. So for our Chicks Climbing and Skiing trips, like the one this past February, we would have to scout the areas ourselves. The day before we’d climb, we would drive around looking, scouting, for ice. Once we found something, we’d try to gauge how hard it was and how far away. The next morning the team would arrive back to the place the ice was last seen. Parking on a random spot in the road, we would start walking toward the climbing—finding quickly that we have no sense of scale or how hard things will really be. 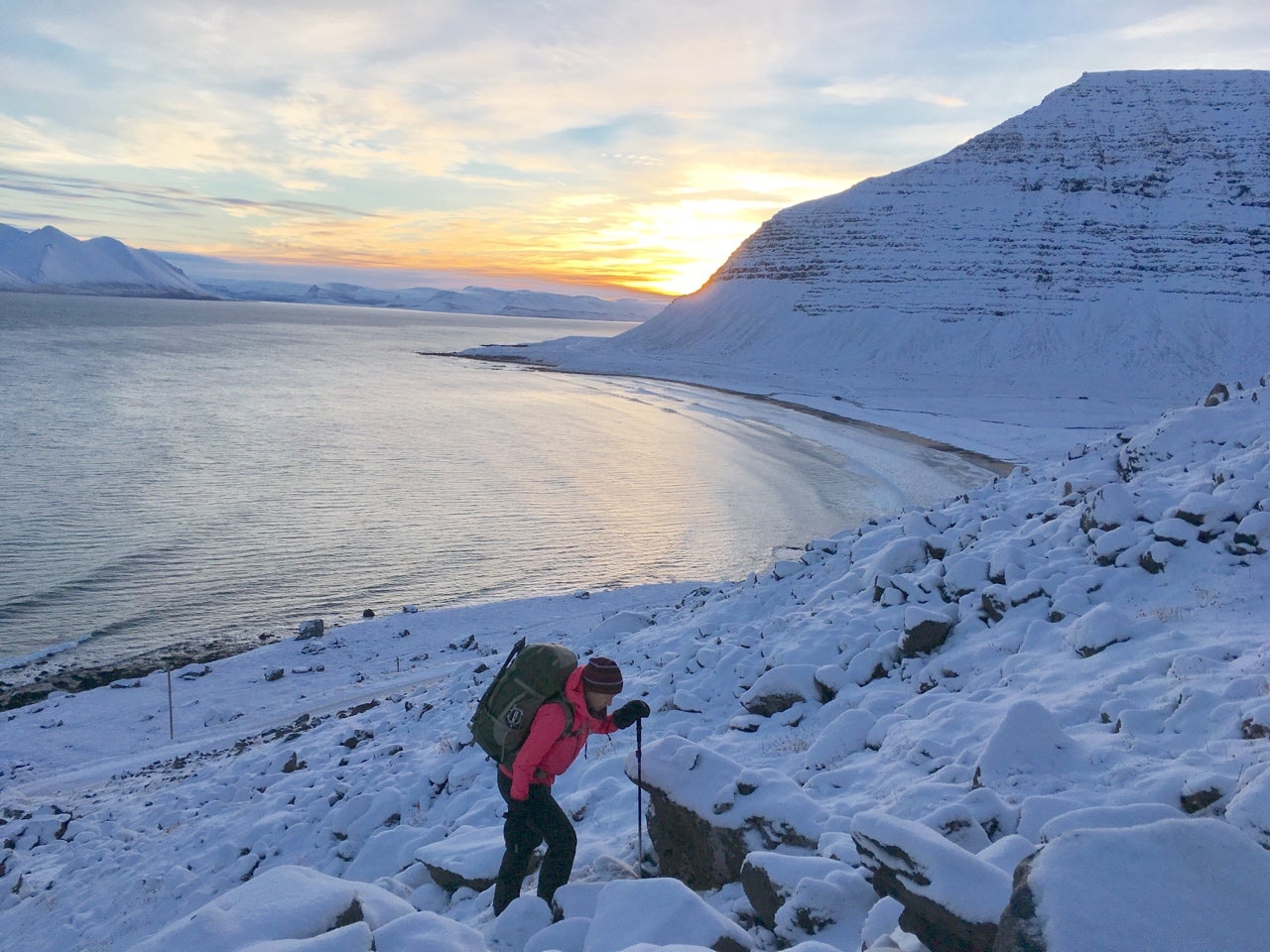 Standing at the top of that gnarly snow-dusted talus to find a non-existent ice climb, I was let down. But Dawn—even though she’d been challenged by the hike—never lost her fire. She turned to me and said, “If you had told me eight years ago that I would be here in Iceland with you, I would never have believed it. Look at us!” In a matter of seconds, she had validated every hardship we had faced that day and every other day on the trip. Her statement filled me so much joy, I wanted to cry.

I met Dawn Rathburn many years ago. After showing up to the first Chicks Rock clinic at Red Rocks in 2009, she became known to me as “Other Dawn.” I taught Other Dawn to tie her figure 8 and other rock climbing basics. Then I talked Other Dawn into taking a Chicks Ice Clinic in Ouray, where I taught her how to ice climb. Over the years, Other Dawn has been to so many Chicks clinics, I’ve come to love to climbing with her and always try to have her in my group.

In February 2017, Chicks Climbing and Skiing offered a trip to Bildudalur, Iceland, to climb remote and wild backcountry ice. The trip description was enough for Other Dawn to register for the trip. And seeing her name on the registration, my already high excitement peaked. I knew we’d be in for a great adventure together.

We broke into three smaller groups for five days of climbing. Naturally I picked Dawn as my partner. I knew she would have the skill and the attitude to push hard and get some climbing done. Other Dawn is as stubborn and tenacious as I am, and this proved to be key to our success each day.

Through Chicks, she has progressed from zero to sixty, and I love being a part of that progression. Standing at the top of that talus field in Iceland, even without any decent ice, I was so moved. We shared a Snickers bar and tackled another heinous approach to a different climb in marginal conditions. 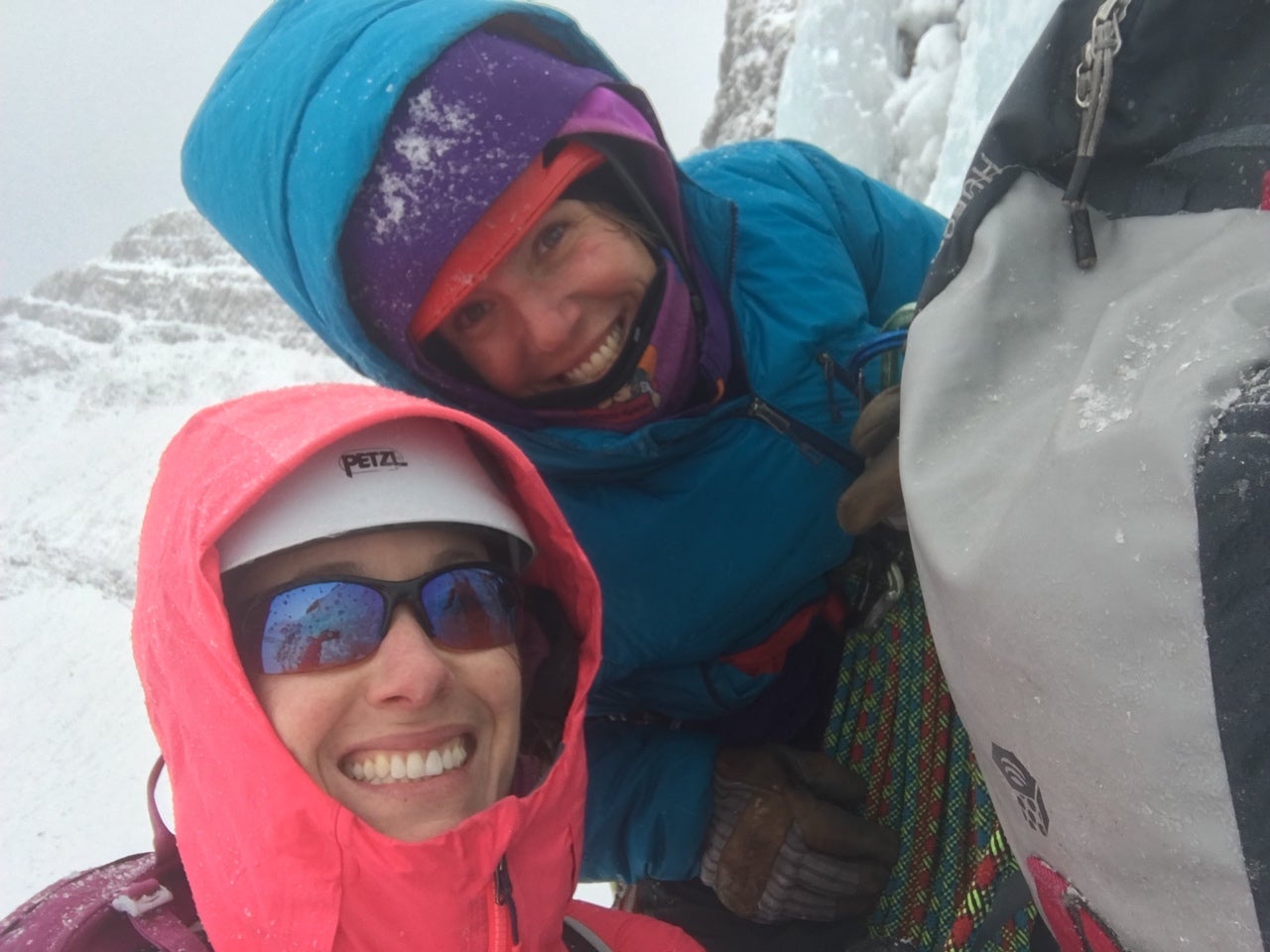 Traveling around the world to ice climb is a gamble. It takes an adventurous soul to want to take on an objective like ice climbing. Not every moment traveling or climbing in the mountains is perfect. Typically we only remember and boast about the good times. I will proudly remember all the awful postholing and vertical talus slopes. I will gladly tell about the overhanging detached ice we climbed. Inside, I’ll smile with glee because I’m proud to have given Other Dawn a few small tools needed to become the climber she is today. That trip was as perfect as can be simply because of the opportunity to climb with my friend, Other Dawn.

Chicks will be offering the Iceland trip again this year. Join us in February of 2018 to climb the wild ice climbs of Iceland.