Want To Climb In Patagonia? Read This First 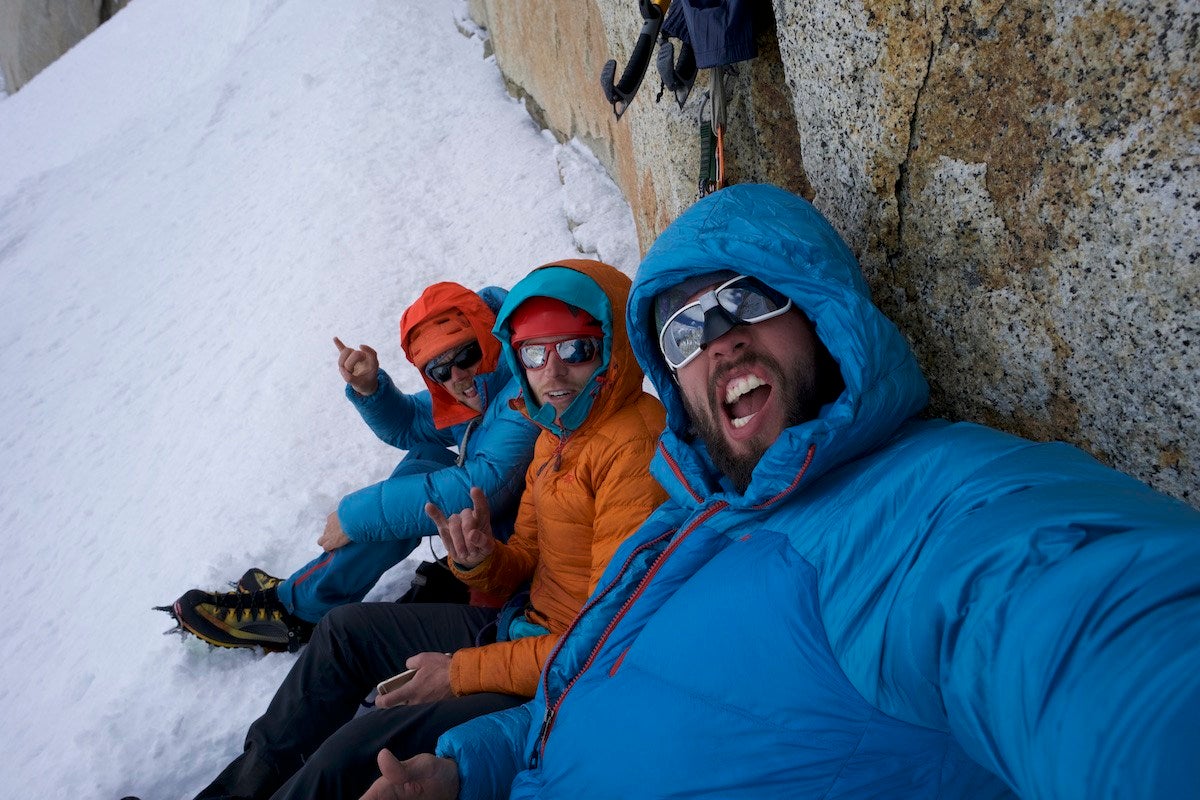 I spent a month and a half in Patagonia this year, and I will readily admit it’s been the most emotionally—if not the most physically—challenging place I’ve ever climbed. I have learned both through my own adventures, and also through observations of others and their own successes and failures here. Here are some of the conclusions I’ve come to, looking back on the experience.

Lesson #1: Come humble or be humbled
It’s near embarrassing to look back just two months ago at the mountains Jimmy and I were dreaming of climbing when we landed here. The audacity of our goals was somewhat humorous. We aspired to do huge link-ups on the biggest peaks. I’ve met many other climbers who’ve come here only to have similar hopes dashed. There are reasons that Los Tempos Perididos hasn’t seen a second ascent, and that the SE Ridge of Cerro Torre has only seen a few. And its not just experienced alpinists that come down with dreams larger than their stomachs. It seems that at every experience level there is unchecked ambition that deserves some second thought. While many times such ambition may work to our advantage—we try things at the edge of our limits and succeed—I would venture to say there is also a lot of “over-reaching” going on here.

Let’s take the Supercanaleta, for example. Only 5.9+ rock, grade 3 ice, and moderate snow climbing. Oh yeah, and its 1,600 meters tall. Difficulty ratings alone, the route sounds fairly easy, but add in the length, eight other parties on route, a seven-hour approach across steep and complicated terrain, hours of climbing in the dark (unless you are extremely fast) and a two-inch rime coating on the last 20 pitches of rock climbing. The compounding complexities make it a very challenging route.

Many people underestimate the Supercanaleta. How do I know this? Because in the last month, during every window, stories were told of parties on the route, in over their heads. I’ve now heard about ice axes tomahawking down the couloir, “foot-slips” that led to 30-meter whippers, frostbite and parties so bonked halfway up the route that they could no longer swing their tools.

Admitting that you don’t have the skills to pull something off is a multi-faceted challenge. First, it’s hard not to be swayed by the talk of the town, so to speak. Every day we hear of the feats of our climbing heroes hitting record times as they solo big routes, employing new techniques that we’re eager to try, and on terrain that we think we are capable of climbing, too. If I had a dollar for each time I heard the names Colin Haley and Marc Andre mentioned in reference to the style in which a route could be repeated (by the average climber), I would be able to fund a flight down here next year.  Believing that we can easily follow in their footsteps is a dangerous trap. After traveling the terrain here, and bailing below the summit on nearly every climb, I now respect just how amazing their accomplishments are. Seeing firsthand the terrain Marc and Colin have soloed, most of which I am ‘technically’ capable of climbing, is quite mind-numbing.

So when you do plan a trip here, come humbly. The big climbs in the massif are not the places to learn to rope solo, try climbing in the dark for the first time, or test yourself at a new climbing grade. Head out knowing that you have the skills in the bag. Trust me, it will make the experience a lot better.

Wondering where you stand? Rolando Garibotti has a list of all the questions we should ask ourselves before stepping out the door. I would venture that most climbers would have trouble admitting deficiency with some of the skills on this list. Being humble means recognizing what you don’t know and adjusting your plans accordingly. 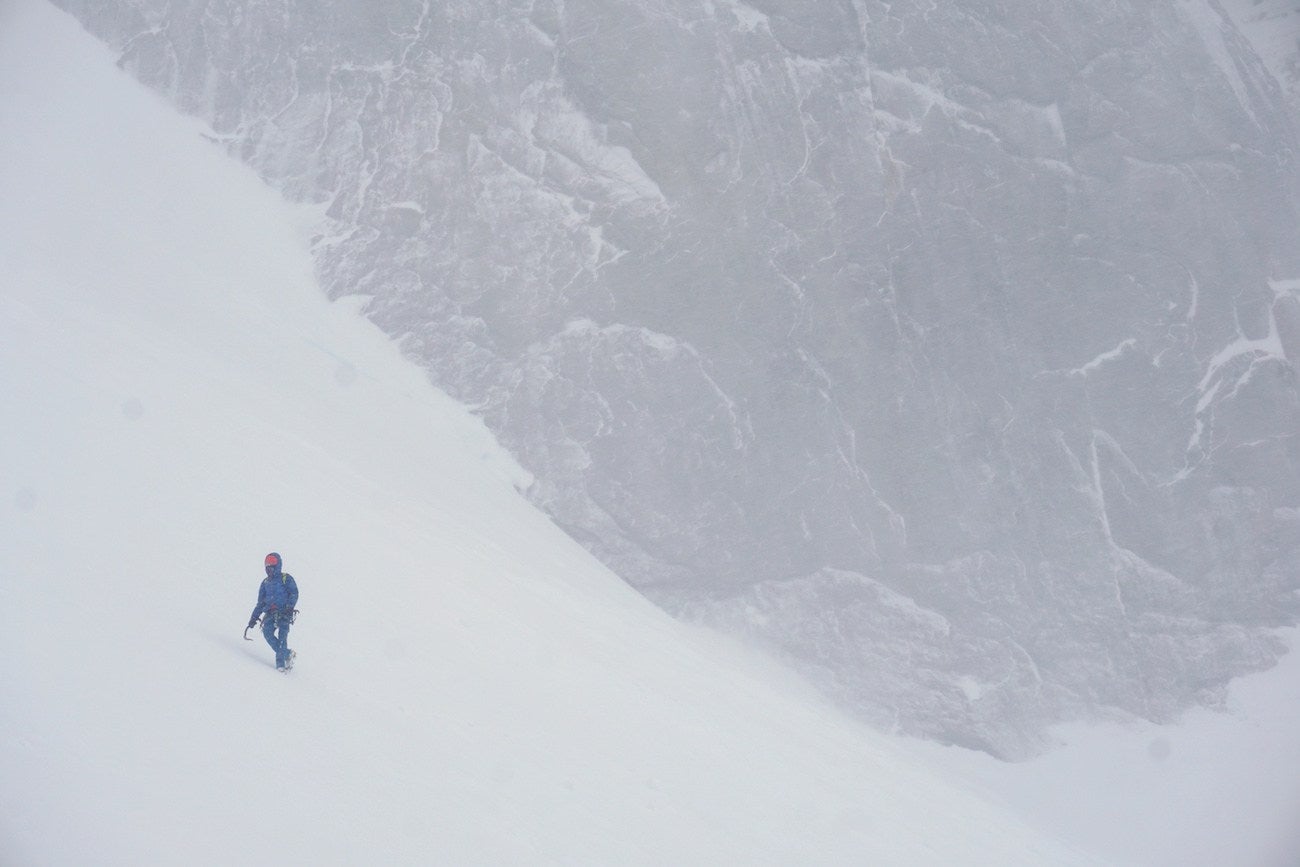 Lesson #2:  Climb responsibly
The second thing I’ve learned climbing here is based on personal experience, rather than observations of others. It revolves around decision making and responsibility, given experiences on route. When we descended from Superdomo in a whiteout across a soft glacier, I fell halfway into a crevasse unroped. On Exocet, we were probably mildly hypothermic and in a bad place as we fought high winds and disorienting spindrift on the descent. In both of these situations, I was a bit befuddled about the position I found myself in. I had never imagined walking in that day and being as scared as I was. I would consider these outings failures, not because we didn’t get to the top, but because I felt that I’d done a poor job estimating how rough it was going to get.

Now, what do we often do when we fail in an unexpected way? First, we often find something or someone else to blame. The easy way to wave off these failures would be to blame our partners for being slow or the weather forecasts for being wrong.

More recently we bailed off the Supercanaleta when we were buzzed pretty hard by a microwave-sizez rock hurtling down the couloir. Since then, I’ve had a mixed set of emotions about the decision to go down. Whether I choose to view it as a failure for not persevering through known dangers, or a success in prioritizing our lives over a summit, it once again became an opportunity to place blame. This time, fault for endangering our safety could be attributed to the party of three higher up who had released the block while they tried their hand at route finding in the dark (for the first time ever, and they had never climbed with each other before).

But, I’d venture that to place blame on anything or anyone other than ourselves and our decision making capabilities is immature and wrong. In doing so, we fail to recognize that we are in complete control of our own successes and safety. We CHOOSE to climb. On the Supercaneleta, we chose to go for a route with a high-level of objective danger, among crowds of others who might possibly have been completely incompetent. On Exocet, Jimmy, Austin and I could have decided to turn around earlier or to go for a smaller objective given the forecast. On Superdomo, Jimmy and I could have admitted defeat and bailed when we saw the weather start to turn. We could have said ‘no’ to the risks we knew about.

Of course, some risks are hard to identify, and sometimes we don’t know enough to fully understand the decisions we’re making. I guess these are moments to dial it back. To stack the odds, we might admit that we don’t understand the weather patterns well enough. Similarly, we could allow that it’s okay to go for smaller climbs when out with a new partner.

Dialing it back a notch is hard, especially in Patagonia. It’s easy to become lulled into a sense of awe by Rolo’s glossy guidebook and by the silhouette of the mountains against blue skies at the west end of town. When I see photos of people cruising beautiful rock on sunny days in the Chalten massif, it’s easy to instantly forget about the moments that weren’t caught on camera.  Those times when the photographer’s hands were too numb, or the spin-drift was so bad he or she could barely breath, much less take a photo. 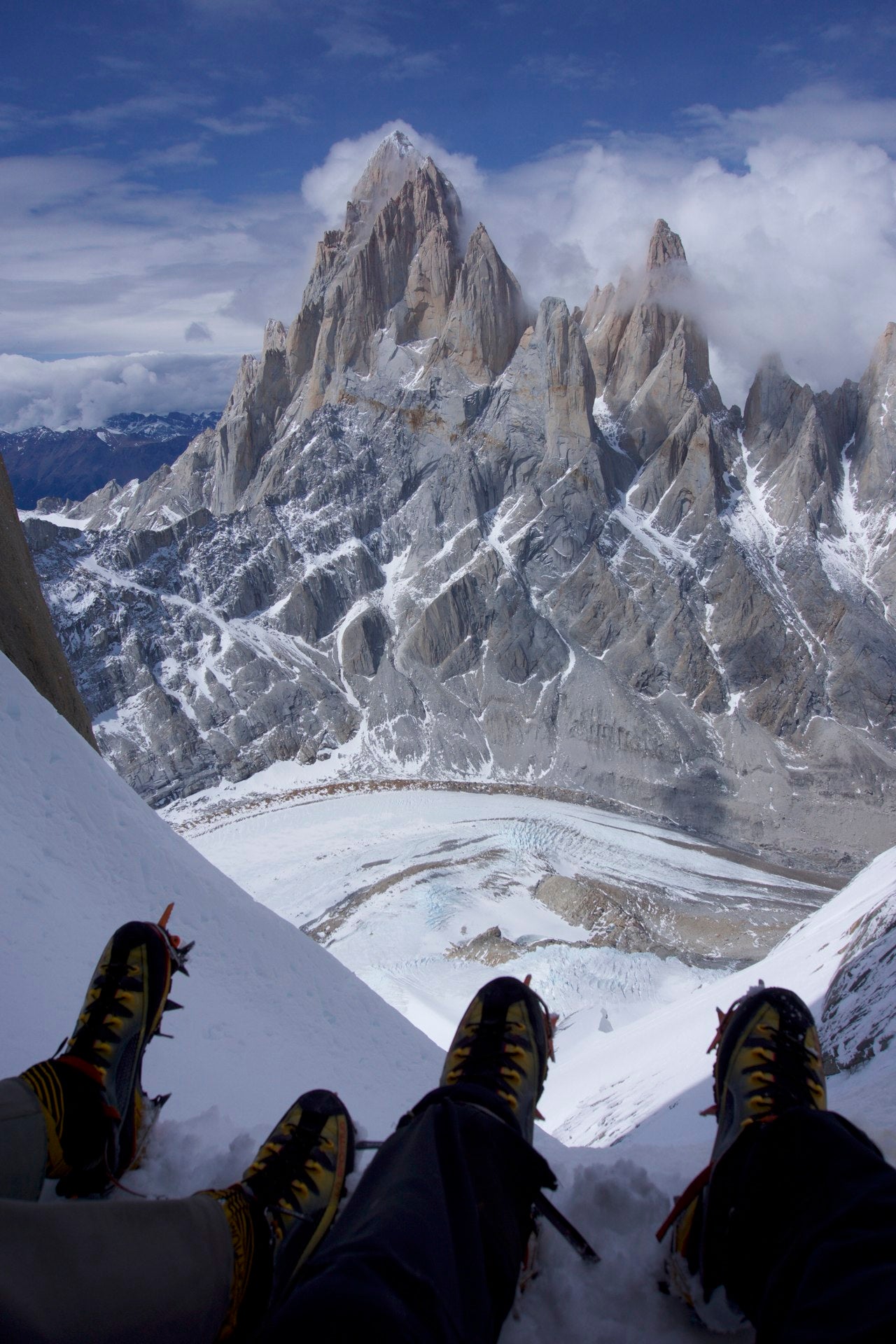 Lesson #3:  It’s not about standing on top, it’s about the experience.
The other day we were hanging around in the apartment and someone commented, “I just want to stand on top of that thing” (referring to Cerro Fitz Roy). Austin replied, “Wrong attitude, dude.” A short conversation ensued about the difference between climbing for the summit and climbing for the experience.

If you just want to stand on top, you are probably in the wrong place, or maybe even the wrong sport. The mountains here are not easy to climb, and there are 1,000 very respectable reasons to turn around before you get to the top.  As an estimate this season, I’d guess people have an average success ratio of one summit for every four times they head out of town to climb. There are, of course, a few pro folks who do much better, but there are also many good climbers who came down this year and never even had the chance to tie in—they were turned around on the approach again and again.

Between this success ratio and the amount of risk, I think Austin’s comment conveys the importance of enjoying all the aspects of climbing. Some of my favorite moments are: drinking coffee on a snow ledge halfway up Aguja Standhardt on Christmas Eve, belaying Jimmy on Superdomo while gazing at Fitz across the valley, and watching shooting stars while perched on my pack, passing time at the base of the Supercaneleta. I’ve also found beauty in exploring the massif, the sounds of the mountains, watching the weather, seeing what my body is capable of, and putting skills to the test. The greatest part of it all is that there’s nothing wrong with bailing if it’s just another one of the great aspects of climbing: the joy of being able to make the right decisions between you and your partner.

I like Austin’s comment because it reflects an attitude that I believe is quintessential to being a lifelong climber: Your career may be defined by the summits you reach, but this is made possible and enjoyable by being present in all aspects of the sport.